Spot a rusty front wheel poking out of an old garage or shed and while some may ignore it, most of wouldn’t. As Gerry Lavender found out, a closer look is sometimes really worth it… 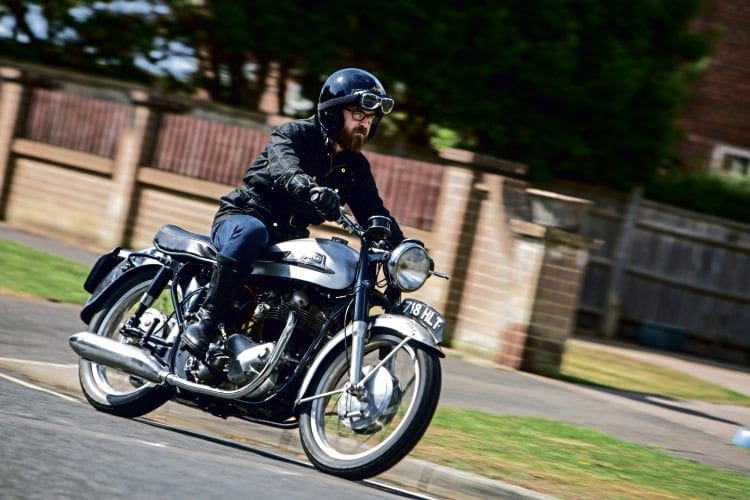 Imagine this scenario for a moment: you’re going about your daily business when through an open garage door you spot a familiar form. Beneath an old dust sheet, cardboard boxes and a couple of sofa cushions, you can just make out the tread of an Avon Speedmaster, what looks like a TLS drum and a peeling chrome mudguard.

You pluck up the courage to investigate further, peeling back the sheet and clearing away the rubbish. Could it be that long-forgotten machine the owner used to cherish but now just wants rid of? An icon of yesteryear waiting to be resurrected and ridden? A piece of motorcycling history frozen in time and ready to be awakened?

Sadly, for most of us this is pure fantasy, but for Gerry Lavender the dream became reality one morning: “It was just up the top of the road.
I go out walking a lot through winter. I used to see the garage open with a bike poking out.
Well, you couldn’t really see it, it was covered in a blanket, some old cushions and had been
buried under various bits of household cast-offs.

“After a few times walking past I got talking to the owner’s wife, so one day I asked: ‘Does he want to sell that?’ ‘Yes!’ she said ‘He does!’

“Her husband, Peter, was duly summoned from the house. I could tell he was reluctant but the fact I was local and he had seen me ride by on a classic bike secured the deal.”

The layers of dirt, dust and grime had built up so thickly, that it wasn’t until Gerry had wheeled his purchase home and set about it with cleaning rags that it became clear exactly what make and model he’d just purchased: “I vacuumed it off, as there were spiders’ nests and dust all over it. I gave it a wipe over and it came up just as you see it now.