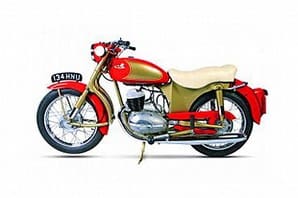 Retired HGV driver Brian Tilke has a long association with DMWs. Brian explained: “In 1958, I owned this exact model. I was a teenager then and thought it was fab. Mine was in these colours; I had to pay an extra £4-17s-6d for that. I’d passed my test in 1955 and had a Triumph Speed Twin but at the time insurance companies were hammering young riders so I sold the Speed Twin and bought the DMW.”

Brian located this one in 2002, via a ‘wanted’ ad in OBM. However, it wasn’t a straightforward purchase – it took Brian four years of ‘cajoling’ before the owner could be persuaded to part with it. Then, when it was in Brian’s hands, the Dolomite was passed to friend Glenn Baker who stripped it. The paintwork was completed by Ray Fish while all the reassembly and ‘fettling’ undertaken by Glenn.

Researching anything for DMWs is a nightmare, Brian explains. “We mainly worked from my memory plus a little black-and-white photo I had of my old Dolomite.” But the hard work of all concerned has resulted in a stunning example, one which is used (“It’s no show pony”, says Brian) and one which attracted many admiring glances at The Classic MotorCycle Show in 2008. “One chap was looking at it very closely,” says Brian, “And was quite knowledgeable about the model and DMWs. Thing was I recognised him and I said ‘Are you…’ and he just said ‘Yes’. It was actor Peter Armitage, who plays Bill Webster in ITV’s Coronation Street.”

Peter is quite an enthusiast, obviously one of good taste recognising a quality product – and restoration – when he sees one. DMWs were built by Dawson’s Motors of Wolverhampton, who by the time they started making motorcycles in 1950 were actually based in Sedgley, Worcestershire. Here, they built a range around Villiers engines, all fitted with Metal Profile (MP) forks – another of the firm’s products. There was a brief dalliance with French AMC engines – which yielded a couple of ‘cammy’ racers plus 125 and 170cc four-stroke models – but the affair was brief and soon the firm was back to Villiers engines. The association with Villiers was to continue to the firm’s end, with models like the Bambi, Deemster and Hornet road racer. A few Deemsters used Velocette LE engines, but other than that, DMW kept with Villiers until 1967, when manufacture ended.