Dick was a well-known member of the VMCC, the Gold Star Owners Club and, in recent years, the Brooklands Museum Motorcycle Volunteer Team.

After National Service in the RAF, Dick started an aviation career with Hawker Aviation. His engineering connection with aircraft continued until his retirement as Hydraulics Supervisor for British Airways at Heathrow Airport.

Dick started motorcycle racing on a BSA Bantam on the UK mainland short circuits before graduating to the Isle of Man where he rode in both the TT and the Manx Grand Prix.  His first TT ride was on a bike with a BSA engine in a Norton frame. Later he moved up to a 7R AJS.  He won two bronze replicas and one silver in the Senior TT race that was dominated by Agostini and Hailwood, so Dick wasn’t exactly slow!

He was a skilled mechanic who played a large part in the engine re-build of the ex-Titch Allen Wicksteed Triumph following the total engine failure at Montlhery in 2011. He had gone to Montlhery with the Brooklands team and his navigation of La Periphique is still recalled with fond amusement. 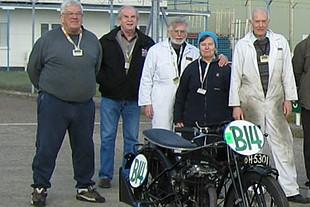 A member of the TT Riders Association, Dick was a loyal campaigner of BSA Gold Stars and his last track appearance was at Mallory Park on his own Gold Star as part of the Brooklands Parade in 2012 when he was part of the Museum’s contingent.

He was a staunch member of the VMCC and the Gold Star Owners Club. It was through his efforts that the Gold Star 75th Anniversary Meeting was held at Brooklands in 2012 when the record was set for the most Gold Stars in one place at one time.

In 2010, he made a 'once on a lifetime' trip to Pukekohe in New Zealand to race his 'Goldie' in the famous classic bike meeting, only to be brought off in the first corner of the first race by another rider. Dick put that down to experience!

Dick enjoyed spirited conversation and held trenchant views on just about every subject under the sun. As such an integral part of the Team, he will be missed and our thoughts go out to his son, Keith and the other members of his family.

Group photo (above) was taken at Dunsfold and shows Dick on the left.