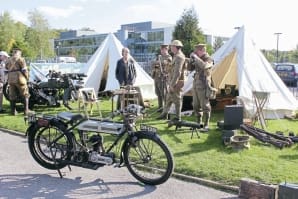 Great War 100 was billed as commemorating Brooklands’ role in the First World War.

In 1915, the Surrey aerodrome and racetrack had only been open a few years before Britain was at war and the location’s strategic importance meant it was soon under the control of the military.

Although Brooklands was technically off limits to almost everyone, Lieutenant Frank Houghton managed to convince the authorities to permit a motorcycle event for the many officers billeted in the area.

It took place on August 7, 1915, was supported by 172 entries and attracted a large crowd to see the first meeting open to the public for more than a year.