The majority of engineers followed one of three distinct paths: variable ratio pulleys, gearboxes and clutches, either singly or in combination.

Such development improved machine flexibility, but often adjustment was achieved with spanners while the engine was stationary. Alteration of the drive pulley working diameter had the side effect of slackening or tightening the drive belt. In extremes, rider shortened or lengthened belts at the side of the road to suit. Proprietary parts makers developed variations on the theme of altering drive pulley diameter while underway, some automatically with others controlled by the rider. 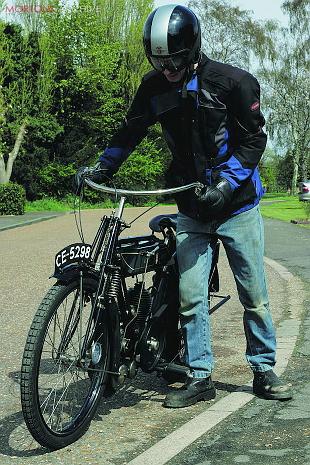 The Philipson automatic pulley replica is an example. As the engine speed slowed, torque dropped but force on the belt turning the slowing engine by rear wheel increased and the pulley opened, thus lowering the ratio. As speed increases, the reverse is true, allowing the pulley to close and raise drive ratio. The Philipson, like many, could be tricked into lowering ratio early by firmly tapping the brass cover with the rider’s boot. At engine idle speeds, if the belt was slack enough it slipped, lost drive and gave a basic form of free engine facility. Hardly a clutch as we know it, but a vast improvement on direct drive, giving the engine far more flexibility.

Other leading makers incorporated systems of varying the drive ratio while on the move. The best known in the UK were the Zenith Gradua and the Rudge Multi designs. Both concepts not only enabled riders to alter the drive ratios at will, but also compensated for belt tension variations, each with their patent systems. Zenith’s moved the rear wheel back and forth, Rudge’s by widening or narrowing the flanges of the rear belt rim to decrease or increase diameter to maintain belt tension.

While Rudge, Zenith and rivals worked on variable pulley options, others developed designs to alter gear ratios by means of gears. It’s dangerous to suggest who was first off the block with such designs, as many small enterprises were developing their concepts as well as the bigger players. Work initially followed two distinct themes – one, gears housed within rear wheel hubs and the other assemblies which fitted directly to the engine in place of the fixed drive pulley.

Engine-mounted designs
Among the first and most successful of engine-mounted designs was the NSU gear, while Sturmey-Archer and Armstrong were acknowledged leaders of hub gears. Later, makers developed frame-mounted gearboxes coupled to the engine by chain and to the rear wheel by either belt or chain. Just as there were many makers of variable pulley systems, so there were of gear change set-ups. And while some were bizarre, many offered acceptable methods of altering gear ratios.

During this period, selected proprietary parts and motorcycle makers were working on rider controlled – rather than automatic – free engine facilities; clutches to you and me. Concepts included cone, band, centrifugal, single-plate, multi-plate and more. Cone-clutches, which had been found much earlier in the car world, found favour with some, including Douglas. 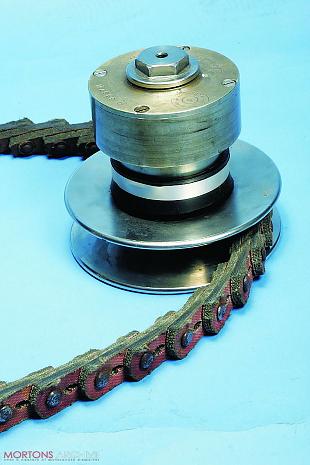 The Kingswood, Bristol maker introduced a cone-clutch on selected models for 1912. Coupled to their existing frame-mounted two-speed gearbox design, the fitting of the clutch was a real advance in engine control, allowing the engine to run even when the motorcycle was stationary and, although near switch-like in operation, it helped with stationary starts too. The 1912 design could be provoked to slip, which Douglas overcame with a larger cone-clutch for 1913.

Many other successful clutch designs took the form of many small metal discs, often no more than two-three inches (50-75mm) in diameter, compressed for drive by either spring action or mechanically with the facility to release pressure for the free-engine option. Some designs were steel-to-steel, others multi-layer sandwiches of steel and bronze, for example. These clutches were often incorporated within either rear wheel hubs or engine mounted gear systems.

Gear system makers weren’t alone in adopting clutches. Some proprietary parts makers offered free-engine-only devices without any choice of gear ratios, and variable pulley designs utilised clutches too. Rudge, for example, fitted a multi-plate clutch to the drive side of the engine’s crankshaft with many tiny (approximately two-inch) metal plates.

Subject to drag
While many concepts were subject to drag or were switch-like in operation, they were a real advance and riders were soon adept at their operation. Engineers realised hub or crankshaft mounted gears weren’t the best option, leading to an almost universal focus on separate frame mounted gearboxes.

Although many favoured belt final drive, chain gained popularity but it created another problem – snatch, an effect countered by a shock absorber system. These were often in the form of a spring controlled set-up on the drive side of the crankshaft, a clutch mounted rubber shock absorbers or a rear wheel hub shock absorber. 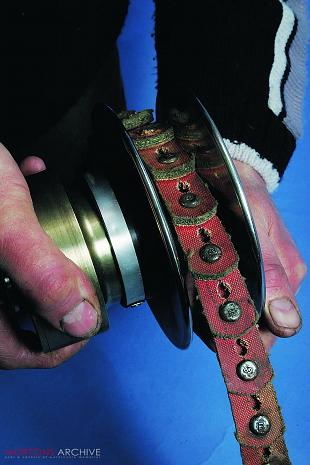 For some makers, early gearbox design was based on a hub gear system complete with multi-plate clutch mounted within the separate gearbox, but rapidly such design were pushed under by the countershaft design we’re all familiar with. If a clutch was offered – and many machines were still clutchless – the multi-plate friction clutch gained favour. However, not all makers were convinced gearboxes were the way forward; Scott and P&M for example relied on options of primary drive with rider controlled selective clutching between them.

From this deep sea of design though, the friction clutch was the winner for most motorcycle applications and has changed little in its basic concept since. Initially, clutches – often with cork inserts for the friction material – ran dry.

Makers of modern belt primary drive kits usually favour dry clutches, often through necessity as many belts don’t withstand oil. In turn, racers and those desiring performance favour dry clutches as drag and wasted power from running the drive through oil is eliminated.