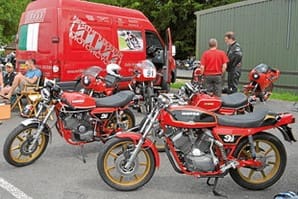 The local Velocette OC make something of an event of it too, with half a dozen ‘racing’ prewar Velos and a pair of New Imperials joining in the session with the 1970s Morini guys. It all works well!

• Grampian Convention
Vintage and classic motorcycles are among the many attractions at the Grampian Motorcycle Convention 2013, at Grampian Transport Museum, Alford, Aberdeenshire. It’s on September 8.

• Huddersfield rally and jumble
Happily coinciding with Huddersfield autojumble on October 27, there’s a transport rally close by too. Details from 01773 819154 or  www.phoenixfairs.jimdo.com

• Ace Classics
The south London company reports that it’s just brought a container load of spares back from the US, mainly for 1960s BSA and Triumph twins. It also reports it’s sold an additional two of the 1964 Steve McQueen ISDT Triumphs at £19,200 apiece. Call Ace Classics on 0208 698 4273. 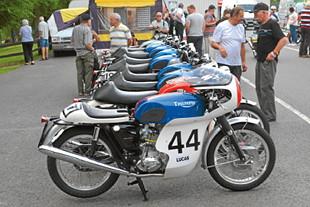 • Cadwell host Beezumph
Lincolnshire’s Cadwell Park welcomed back Beezumph, after it spent a few years away, on the other side of Great Britain at the Welsh circuit of Anglesey.
A fine selection of machines congregated for the event, on July 27, which is essentially a British and European only track day. Of course, Triumph and BSA triples were in the ascendancy, with several ex-race machines there, as well as rarities like Kevin Charles’ Difazio Hurricane triple.