But Hugh was “pleased to discuss” the all white police machine G12, and pose for a photograph, below.

The police issue G12 doesn’t appear to be too different to the standard model, though it has a couple of police-specific features, namely the half length seat and the rear carrier, which is presumably a radio platform. The all white finish is non-standard too, likewise the addition of crash bars, though the ‘new for 1962’ tank badges are in situ. 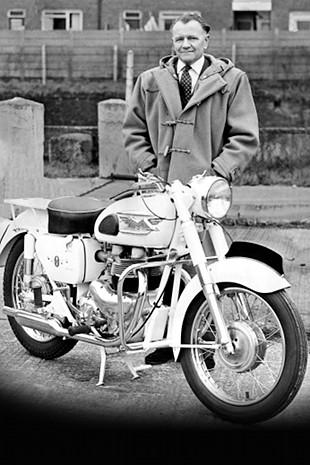 In 1962, the cooking road going model also gained the model name ‘Majestic’ with the sporty CSR version to be called the Monarch. Whether anyone save AMC sales staff ever used the new monikers is a moot point…

One interesting departure from the standard ‘Majestic’ specification is that in 1962 the G12 would have had Matchless’ megaphone-type exhausts, but this one has the AJS style silencers. One wonders why? Perhaps the police thought a ‘racy’ megaphone sent out the wrong message.

AMC had launched its 650cc twins in 1958, with the Matchless the G12, the AJS the Model 31. Based on the 600cc versions, themselves evolved from the 500cc models, the 650s were initially available in standard, de Luxe, CS and CSR ‘specs.’ A full cradle frame came in 1960. The last were made in 1966, by which time the frame and cycle parts had been hijacked and fitted with Norton Atlas engines, making the 33/G15.