Some fantastic displays and exhibitions marked the 34th Carole Nash Bristol Classic MotorCycle Show, and none were more impressive than the winner of the Best Club Stand prize – the Bristol section of the Norton Owners Club.

Inspired by their own first ever meeting back in 1963, club members built a 60s style shop window that showcased their stunning selection of machines.

Event manager Nick Mowbray said: “Despite some horrendous conditions in the southwest of England, the crowds arrived in their thousands for the show and it was truly fantastic to see.

“They were certainly treated to an excellent two days, with everyone commenting on how much of an effort clubs, traders and individuals had gone to in order to make this a show to remember.

“The Norton Owners Club members certainly earned their award for a particularly creative effort, but all of those who had displays deserve credit and we can’t wait to see what everyone comes up with next year.”

Another inventive exhibition included a stand laid out like a stables, with motorcycles taking the place of horses in stalls.

Bob Presley, designer of the winning stand, was rightly proud of his club’s hard work and was also quick to praise the competition: “We’re incredibly excited to have picked up the trophy for Best Club Stand, and it was certainly worth all of the hard work.

“Looking around the show it’s clear that the standard is as high as ever, and we will have to get our thinking caps on to come up with something even better next year.” 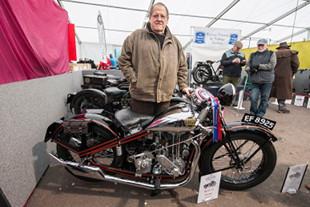 Elsewhere, it was a successful weekend for Gaby Hunt, who won the Best In Show prize for his 1929 Sans Soupape Emmags 50.

The rare machine was built in Paris, has a Swiss-built MAG engine and has a frame of unusual pressed-steel construction.

James Robinson, editor of The Classic MotorCycle magazine, talked about the winner and praised the high standard of display machines at the event: “There are some lovely machines, many of which are freshly restored.

“The Best In Show winner truly is a showstopper which, unbelievably, Gaby only finished on the Friday before the event.”