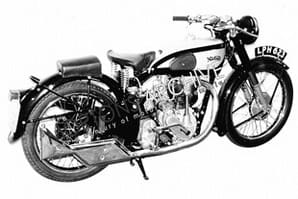 Race-winning pedigree doesn’t come any more comprehensive than that of the ohc Norton; TT wins, GP triumphs, world championships and of course national and club wins for decade after decade – and still ongoing. There were a host of models, but the pedigree is plain to see in them all.

1927 Norton CS1 'Cammy'
Norton’s first cammy. The Walter Moore designed CS1 enjoyed barnstorming early publicity, when Alec Bennett raced his to victory in the 1927 Senior TT. The so-called cricket bat engine proved tough and durable, while there was also a little seen and heard of 350cc version, the CJ.

1932 Norton International
This (illustrated) is what enthusiasts think of when a 1930s cammy is mentioned; Arthur Carroll designed engine, big petrol tank, left side oil filler, no lights or ‘unnecessaries’ and the ability to look fast even when standing still. Shown is a Model 40 (350cc).

1935 Norton CS1
Contrary to the belief of many, Norton continued to list the CS1 until 1939, by which time it of course used the Carroll-designed engine. Aimed at the ‘sporting tourist’ rather than the racer the well-equipped and classy roadster would have been a cut above in the 1930s.

1949 Norton International 'Garden Gate'
The first of the post Second World War Inters used the same frame/cycle parts as the ES2, with the addition of the big, iconic fuel tank. Still as handsome as ever, though the frame was getting to the end of its useful life. Roadholder forks were still the best, though.

1953 Norton featherbed
Last of the road-going Inters, the Featherbed-framed model was understated in its gunmetal grey finish, but still combined the world’s best frame with an engine of undoubted class and pedigree. It was the last of the road-going cammies; listed until 1958.

1954 Manx Norton
Is there a more famous racing motorcycle? Or a better looking one? Still winning races today (and surely the model possessed of most race wins ever), the double overhead camshaft Manx went out of Norton production in 1962 – but it’s still possible to buy a brand new example today.