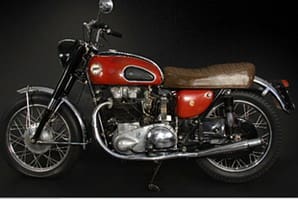 And amongst Waylon's personal possessions is one lot which must rank as one of the rarest motorcycle treasures of all time, as it is none other than Buddy Holly's 4,000-mile Ariel Cyclone.

Bought on May 13, 1958 by Buddy as he celebrated his hard work and success in the music industry. Buddy and other musicians J.P 'The Big Bopper' Richardson and Richie Valens were tragically killed the following year in a plane crash, dubbed by the press as 'the day the music died'.

The bike stayed with the Holly family until they sold it in 1970. In 1979 it was presented to Waylon Jennings, a close personal friend of Holly, as a birthday gift on his 42nd year.

Beautifully preserved and not ridden in over 20 years, some estimates placed on this lot alone are close to £1M!