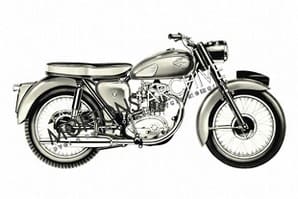 BSA’s unit singles were, for many years not in vogue, available for rock bottom prices which reflected their reputation. ‘Hand grenades’ and such terms were attached to them; full of energy, they were supposedly liable to explode…
Advert

Nowadays, though, that situation has changed with the bigger models in particular developing quite a following and being priced accordingly.

Announced to the 1959 season, the C15 Star was based – quite blatantly, which was a slight shock to the system as BSAs and Triumphs hadn’t, thus far, looked alike – on the Triumph Tiger Cub, itself a development of the Triumph Terrier. The C15 Star was not intended to be exciting or glamorous; it was a tool to do a job. That job? To get people to work, reliably, efficiently and comfortably.

Soon, the boys in BSAs comp shop were playing with the baby Beezer, it soon finding itself a niche in the off-road market. Though trials success came, it was the scrambles world where the unit Beesa most excelled, with Jeff Smith world champion in 1964 and 1965.

In a twist of irony, right at the end of the BSA/Triumph group’s days, some B50MXs were sold badged as Triumphs. It wasn’t the end for the unit BSA though, as CCM continued campaigning and developing them through the 1970s, with some remarkable results. Description and years of models follow…

1958 BSA C15 Star
Launched at the end of 1958, the new BSA borrowed much from the Triumph Terrier/Cub range, though the cylinder was vertical rather than inclined. It looked modern and was sensibly styled, aimed at the ‘ride to work’ market.

1970 B44 Victor Special
There was a host of B44 variants, with the Victor Special joining the B44 Victor Roadster, Victor Enduro, Victor GP and Shooting Star. All shared the same capacity of 441cc, achieved by stroking the B40 to 90mm, from 70mm.

1967 B25 Starfire
There were several C25/B25 variants (Barracuda, Starfire, Fleetstar, Victor Trail and even Gold Star) which shared the same basic 250cc engine, though in various states of tune. Reasons for the change from C25 (1967) to B25 (for 1968) remain unclear.

BSA B50MX
The last of the BSA-built range of singles, with the B40/44 stroke retained, but bored to 84mm, giving a touch under 499cc. There were the road going Victor and Gold Star, plus the one which outlasted them all – the B50MX, made until 1974.

Visit the Mortons Archive for more information and online search options concerning BSAs, or speak to our archivist Jane Skayman on 01507 529423 with your requirements. Email enquiries@mortonsarchive.com