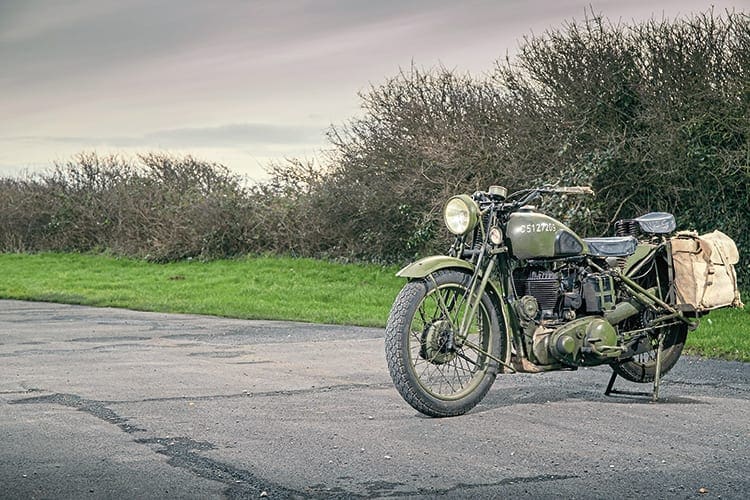 This wartime BSA WD M20 is not memorabilia but a working motorcycle, and one which its owner rides frequently, and alarmingly fast!\

Jonny the photographer and I let out the equivalent of “Cor!” simultaneously, as ahead of the car, Ken Powell treated us to a virtuoso display of fast, smooth motorcycling, up and down through the tree-lined, hilly, stone-walled lanes of the Isle of Wight.

The car was from 2016, its speedo was nudging 70, and I had to try hard to keep up with Ken on the wartime 13bhp WD M20 500cc side-valve single. It wasn’t just me; former Motor Cycling Weekly man Dave Richmond admitted that he’d once had to ask Ken to slow down, while following the M20 on his XS1100 outfit.

It was a combination of Ken’s deep knowledge of South Island’s roads, his uninhibited attitude, and his long involvement with BSA’s M-Series, which went back to the days when he’d had problems with the open bell-mouth of his M21’s angled carb sucking in his flares. He once filled the 600 with diesel by mistake, but simply retarded the ignition, rode it home, and next morning, “just to do it,” started it again.

He also has a firm grasp of the fact, as I finally learned on my own first M21, that once up to speed, the meagre power has to be husbanded carefully, via incremental throttle use and never backing off unless it’s absolutely unavoidable. Among his large collection of classics plus a few fast ‘moderns,’ the rugged side-valves have a special, permanent place in Ken’s head and heart.

Ken acquired his M20 from Chris Cobb, nephew of legendary Greeves senior partner Derry Preston-Cobb, in 2011. Chris had had it for 14 years before that, from an owner in Eastbourne who had lightly civilianised it “with Woolworths black.” Chris put it back to the regulation (and widely varying) khaki-green, known as “Number Three Gas-Proof Camouflage” – “restored it with a paintbrush,” laughed Ken. In his seven years of ownership, Ken claims that “all I’ve done is adjust the tappets and points, and change the oil,” though he did later mention having spent two days facing the cylinder head’s mating surfaces with an electric drill on glass. This M20 has not been neglected.

Both Chris and Ken, while not re-enactors, took the BSA to the D-Day commemorations several times, including the 70th when President Obama attended. Ken also has an elderly friend on the Island, Vera, who during the war had been a DR on a BSA C10, attached to the Campfield Road AA battery, one of the hottest spots. The Island suffered regular bombing as it was on the run to and from heavily blitzed Southampton, and also later from low level hit-and-run fighter-bomber attacks on its coastal towns.

BSA’s Small Heath works, where M20s were made, had also famously suffered. On November 19, 1940, the city endured its first major raid, and the BSA works, at the convergence of a canal and railway lines, was an easy target, took direct hits, and was set alight. There were 53 personnel killed and 89 seriously injured. As Steve Koerner discovered researching his book ‘The Strange Death of the British Motorcycle Industry,’ the raid mainly damaged the armaments section and did not affect the motorcycle assembly areas. But there was much bitterness among the workers at the absence of early warning, the deficient bomb shelters and management’s failure to remove excess flammable material in advance of the incendiaries falling. Confidential Home Office correspondence confirmed the management’s poor preparedness.

The shattering effect on morale, with further raids the following two nights and water to fight the fires running out, meant it was hard to convince some workers to attend night shifts, or attend at all. A report said the factory “was brought to a complete standstill”, and that workers coming to collect their wages “took over and controlled the entrance to the factory,” with management calling their attitude “both ugly and menacing”. Rifle production was halted for three weeks, and despite the heroic efforts of individuals, the antiquated Birmingham Fire Service was judged to have performed so badly that its chief officer resigned. For a long time, Birmingham people believed the actual casualty figures for November 19 were much worse than those officially recorded.

A better organised National Fire Service was formed early in 1941, armament production farmed out to satellite factories, and the raids on Birmingham, Britain’s second-largest city, slackened, with “only” seven major ones from then until 1944. Small Heath was again soon producing up to 1000 M20s a week, with one machine coming off the line every five minutes at peak periods. BSA’s final military production total, including several hundred C10s, was 126,344, a third more than their nearest rival, Norton.

Though the 500cc side-valve had been acknowledged even by BSA as heavy, slow, relatively ponderous and with poor (4.6 inch) ground clearance, after Dunkirk the War Office made standardisation, ruggedness and reliability their priorities. The M20’s reliability came from Val Page’s design and his 1939 modifications to it. These had included cams now running on fixed spindles so the timing cover could be removed without disturbing the valve timing; and an extra ball race main bearing on the timing side, which, with the drive side’s ball and roller bearings now able to be moved further apart, helped create an exceptionally strong bottom end. The single spring clutch had also been reintroduced for simplicity’s sake, though it would prove a mixed blessing, with lack of adjustability to prevent both slip and drag. Further ease of maintenance came from a top end which could be overhauled without removing the three gallon tank, and the magneto’s drive which could now be accessed via a cap on its side. 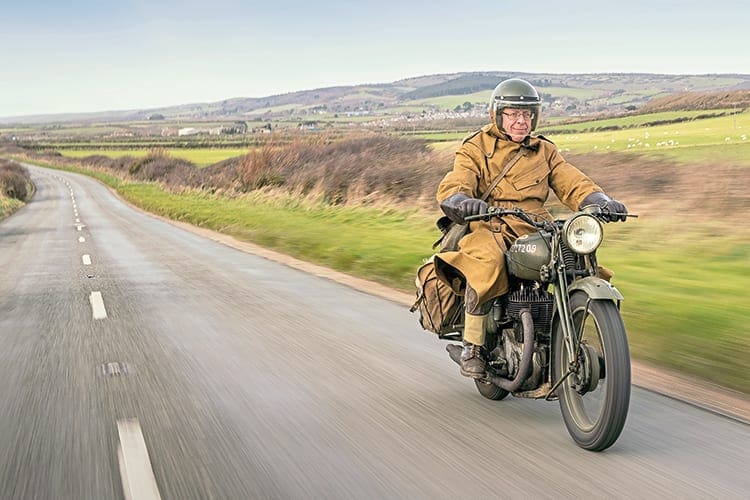