What has a new girlfriend, the Fire Service, marriage, WWII, Uncle Frank, the Civil Defence Corps, economies, a collapsed shed, the tome Speed From Your Motorcycle, The Blitz, Maurice Cann… and… got to do with this BSA M24? Well, in fact, everything.

In June 1951, young Roger Barlow proudly escorted his new girlfriend Mary to her front door. Suddenly the blossoming romance was briefly interrupted by the methodical thump of a lusty four-stroke single. Slowing, the cause of the attention pulled into Roger’s young lady’s gateway.

“Who’s that?” uttered Roger, making no effort to hide his enthusiasm. A reasonable enough reaction, as this wasn’t just any old British single but Small Heath’s first Gold Star.

The 90-plus-mph sporting single took Frank about his business up to WWII, then continued to serve its owner throughout the conflict. Uncle Frank was a member of the Fire Service and Civil Defence, qualifying him as an essential transport user. All appropriate licence discs survive from this time. 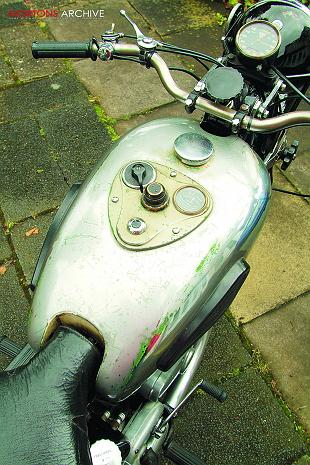 All went as well as a wartime life can, until summer 1941. During a bombing raid, Uncle Frank’s house was flattened and the garden shed housing his precious BSA M24 copped it too. The proud single remained upright, supporting what was left of the shed. Other than a dent to the fuel tank and another to the headlight rim, both of which it wears to this day, the Beezer was unbowed by enemy action.

This story may never have seen the light of day except that Roger Barlow, who later married Mary is a time-served motorcycle enthusiast and his career to this point proved the ideal grounding for what was to come in the decades ahead.

Before Roger was born, his father John began motorcycling with a lightweight side-valve JAP-engined Diamond, later swapped for a NUT V-twin combination. Naturally, Roger developed an enthusiasm for motorcycles, which was noticed. In 1948, the teenager was given a copy of Speed From Your Motorcycle. Captivated, his passion became stronger.

A discerning choice, the military Velocette was something of a rarity, which later took Roger in company with a Royal Enfield mounted friend for a two-week touring holiday of Brittany – the trip cost £25 all in. Although commonly known as the MDD, some prefer the term Velocette MAC (WD). Approximately 1200-1400 were supplied before the development of the 350cc ohv MAF. Not being a large volume maker Velocette struggled to build motorcycles quickly enough and they were more expensive than the ohv 350s from rival makers. The contract was cancelled after 947 machines had been supplied.

National Service with REME (Royal Electrical and Mechanical Engineers) followed with Roger serving two spells as a DR – firstly on a Matchless G3L and then a BSA M20. While stationed near Southampton, Roger called in at Lawton and Wilson’s shop to discover a 500cc HRD TT Replica. Enquiries revealed it was owned by one of the mechanics and a straight swap with a Velo soon happened. 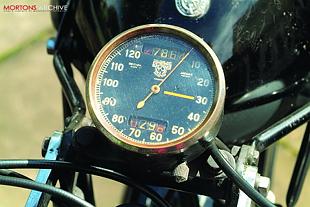 “The swap with the Velocette was a splendid move. The HRD was a genuine TT Replica, bronze head, rev counter, no lights, no kick-start, straight through exhaust. Noisy, fast… utterly delectable. Riding back to camp after weekend leave by the light of the moon and cycle lamps was magical. No traffic and now just a memory.”

While Mary and Roger embarked on married life, Uncle Frank’s M24 continued to serve him as his only means of transport in and around Birmingham until the mid-1960s. No one knows why the BSA was laid up, possibly the impending helmet law was a final straw. Anyway, laid up the Goldie was, well greased and stowed to the back of the garage, gradually disappearing under the flotsam of life.

Uncle Frank had perhaps hoped to ride his M24 again, but finally in 1988 he realised the reality of the situation and his sporting single passed to his nephew by marriage. Now you see why Roger had to get married! In Mr Barlow’s words, Frank Biddle was a man of frugal tastes and means. The Gold Star was always ridden with economy in mind and had never been taken above 50mph. Happily Mr Biddle’s approach meant he never altered the machine in any way. Other than its scars – some touched-up – and new perishables, the machine remains exactly as it left Small Heath 69 years ago.

In Roger’s care, gradually the Gold Star was fettled for the road again. With the help of Bob Currie, British Bike magazine and the Coventry Motor Museum, its original Birmingham registration marque EON 59 was saved – no mean feat in the late-1980s. 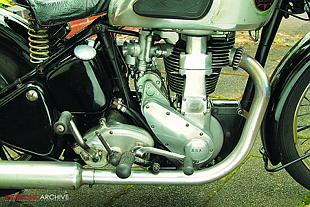 In June 2007, Mick Volante and Bill Shackleford enjoyed a canter on Uncle Frank’s M24 and almost certainly were the first to push the speedo needle over 50mph. After their thumbs up, a month later it was my turn. I make no excuses for my love of Goldies based on first hand experience of a later big finned model residing in our workshop courtesy of son Peter. However, I accept they’re not to everyone’s taste.

Rolling chassis
Out on the road the entire rolling chassis is comparable to any other top pedigree girder front fork 500. The low seat height and centre of gravity has always suited my style over high sprung frame 50s and 60s models. Pitch the M24 into a sharp bend or roundabout indecently quickly and it corners with perfect line. As you pick the machine up from the bend, wind open the throttle and enjoy the experience.

The rigid Goldie’s brakes are good for the period and fine in most up to 60mph situations, even emergencies, but sustained high speed riding and braking will result in fade. Period 1930s lights are adequate rather than brilliant – they’re fine for the 50/55mph jog home from the clubnight, or even for longer night time runs on light summer evenings.

By the late 1930s many makers were manufacturing decent gearboxes and BSA was no exception. Although not quite as a fast as a 1950s BSA box, it’s still nimble with totally vice-free changes in either direction. Credit for this goes to Uncle Frank who treated his machine with care and affection. 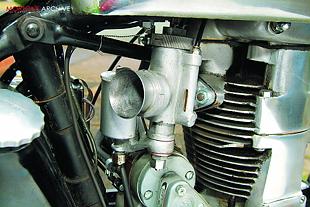 All of which brings us to the engine. The aluminium-barrelled unit that served the brief M24 production run is distinctive. In fact, it oozes class. Starting proved a one kick job hot or cold and the throttle, thanks to its Amal TT carburettor, needed no blipping to keep the plug dry – a habit I’m used to with the much later examples.

Instantly, I was struck by the M24’s flexibility – it revved keenly like a post-WWII shorter stroke 500cc Goldie, yet happily slogged down to 30mph in top. Then I had a big grin-inducing whistle along at… er… quite rapidly. As I’m sure Mr Barlow will read this copy, it’s perhaps best to simply admit to being the third rider to take her above 50mph. I’m just not saying by how much!

The last paragraph is left to two gentlemen now departed. Uncle Frank, whose quiet joy of ownership lasted half a century, and Gold Star expert John Gardner, who told me there was nothing like a good thrash on his M24. BSA claimed ‘The world’s finest standard sports 500’ – it wasn’t an idle boast.