The early years of the 1980s were a good time to hear about unmolested ‘barn find’ motorcycles, before prices went through the roof. The launch of The Classic MotorCycle during the summer of 1981 certainly did a lot to divert many important machines from the scrapheap into the hands of appreciative new owners.

I remember being offered a Manx Norton for sale cheaply, by a chap propping up the bar of The Mitre pub in Kirk Michael, during the 1982 TT Races. The bike turned out to be a 650SS, but this hardly diminished my excitement as I gingerly revealed a machine in original condition from beneath a layer of packing cases in a shed.

Others had similar good fortune. In the same year that I came into Norton ownership, Robert Flake heard about an old bike that formed part of an executor’s sale. “I knew straight away that this machine was something special when I learned that it had been stored indoors since the 1940s,” says Robert, “So I offered a hundred quid without seeing it.”

Robert’s excitement grew with first impressions of the bike, under what appeared to be a very heavy layer of dust. 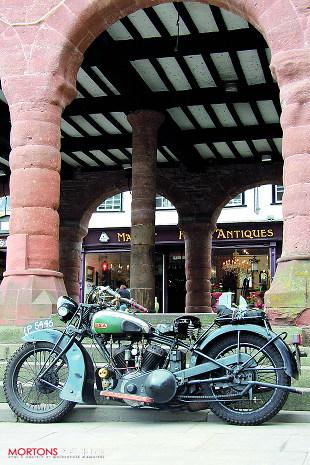 In fact, the ‘dust’ turned out to be semi-solidified concrete. The proprietor of a builder’s yard in mid Wales, having inherited the motorcycle from his father, had laid the machine up and forgotten about it for the next four decades.

Sunk up to its footboards in sand, the inert machine resembled a life-sized sculpture without any visible maker’s name. Rolling up his sleeves, Robert borrowed a shovel to exhume his purchase, which travelled home to Hereford strapped to the bare sidecar chassis of his 1955 BSA M21 combination.

Cleaned up, the mystery bike turned out to be a side-valve V-twin BSA, an A13 prefix to the engine and frame numbers identifying it as a G33-13 World Tour model from 1933. Spare parts for pre-war BSAs are notoriously scarce, so bringing the BSA back to life after four decades of Lazarean inactivity would call for both engineering skills and ingenuity.

The first task was to open up the engine. The pistons were in poor shape, so Robert had them alloy-welded up and then re-machined them himself during breaks as a CNC machine operator. He spent long evenings fabricating two sets of three compression rings on his model-maker’s lathe at home.

The original BSA valves were retained by pins through a drilled hole in the valve stem. However, these were made of cold-rolled steel in a process that tended to lead to stem breakage. Robert found that Series I Land-Rover valve guides had the same outer diameter as those in the BSA, so he shortened a set and opened up their internal diameters to accept new Rover 2000TC titanium valves.

The next step was to machine slots in the Rover valves to accept cotters and then modify the BSA’s cylinder heads to accommodate valve seats with a 30-degree angle, instead of the original 45-degree. It took three months of evening work to make tools to cut the valve seats, the conversion topped by replacement of the standard conical valve springs with inner springs from a BMC Mini.

The engine internals were starting to look good, but the rebuild stalled when attempts to weld cracks in the left-hand crankcase proved unsuccessful. Eventually, a set of 770cc Model E cases turned up; these required re-machining for larger pistons, which involved further evening work making yet more tools. For good measure, Robert modified the oil flow to feed the rear cylinder as well as the front and streamlined the internal crankcase webs to improve lubricant circulation. 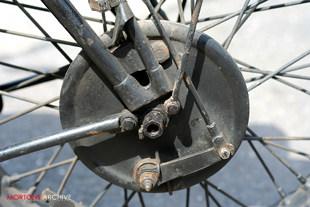 Both exhaust headers had rotted away, so Robert modified a set of later Model G14 downpipes to fit the original silencer box. The rear wheel had also rusted through, but a second-hand M21 rim of identical diameter laced successfully to the original hub.

The bike still has 6v electrics, although a modern solid-state J6 unit has replaced the erratic regulator control box and the magneto ignition now benefits from a Dave Lindsley (01706 365838) microchip conversion.

The only cosmetic renewal has been a layer of Crown Plus 2 household black gloss brushed onto the mudguards. “It takes all my time to keep the bike running,” chuckles Robert, and I believe him. Pragmatic modifications have restored mechanical reliability to a neglected 80-year-old design, but only sheer love and perseverance maintain it in daily use.

I’m honoured that Robert should offer me an outing on his Model G, aware that I’ll be only the second person to ride it in over 60 years.

First of all, there is a vital sequence of taps to concentrate on, since the saddle tank contains both fuel and oil. The right-hand rear tap opens the fuel flow while the left-hand forward tap feeds the double-sided Pilgrim oil pump. For reference, the left-hand rear tap operates reserve and, along with the blanked-off right-hand front tap, would originally have primed one cylinder with petrol.

The fuel tank still has its brass inspection light, located centrally in the instrument console but, unsurprisingly for a machine in everyday use, there is no Smiths eight-day clock. 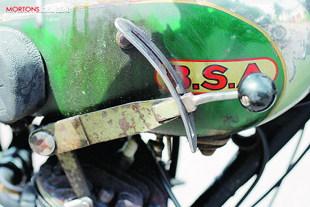 I retard the ignition by twisting the left handlebar grip towards me, like an Indian throttle. Robert cautions against applying too hard a pressure on the kick-starter, because the gears and linkages are prone to breakage. He has filled the gearbox with grease as a precaution, so that broken parts will sink to the bottom.

The low-compression motor turns over easily with assistance from the valve lifter and thereafter ticks over with a reassuring solidity. First gear selection is forward, after rocking the lever back a little to ease engagement. The clutch disengages smoothly, in spite of still being on its original set of plates, and the bike moves off at a sedate walking pace.

Pulling the hand-change lever back for second and then third gears, the bike glides up to traffic pace on the open road. The riding position is comfortably upright, with running boards set low and forward. However, potholes give a nasty jar to the limited-travel front forks and there is little cushioning, even at 18psi pressure, from the 3.75×19 speedway tyres.

Cornering a machine with a wheelbase longer even than my Harley calls for forward planning and precision. The relined front brake with angle-iron shoes incorporates a ratchet at the handlebar lever for parking with a sidecar, but is generally indifferent towards deceleration. Fortunately, the rear brake is good.

I reunite the Model G with its owner at Lucas Motor Cycles in Ross-on-Wye. Proprietor Gordon Lucas worked at BSA in the early 50s and is very interested to hear this bike’s story. He serenades us with the sound of a singing kettle as we discuss the machine’s merits. 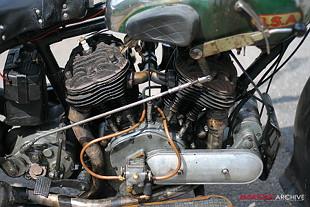 Robert informs us that he's covered more than 100,000 miles on his BSA in two decades of regular use. That’s equivalent to two full laps of the globe and validates the bike’s ‘World Tour’ designation. I point out that the cachet originated from the ultimate road test, concocted during the 20s between the maker and The Motor Cycle.

BSA’s first V-twin, listed as the Model A but subsequently known as the Model E, had arrived in 1920 and proved ideal for heavy utility work. It offered a 50-degree side-valve V-twin with single Amal carburettor and front-mounted Lucas magneto. An enclosed primary chain case drove a three-speed gearbox, all mounted in a rigid diamond frame with sprung front forks and seat. It set the template for a flagship design that would remain in production for two full decades.

A 996cc Model F variant followed in 1922, re-listed from 1924 onwards as the Model G. Several police forces employed it for patrols, appreciating the fact that its top speed could comfortably exceed that of most cars of the period. For the public, the machine offered reliability and value for money in line with BSA’s philosophy of producing bikes that ordinary people could ride to work.

High profile racing hopes
Model G variations included Standard, Deluxe and Colonial. But BSA, which had had its high-profile racing hopes dashed by mechanical failures at the 1921 Senior TT, was keen to add prestige to its top product through a sensational demonstration of its reliability.

The idea of taking two Model G outfits on a 45,000-mile world tour is said to have come from BSA’s chief salesman of the time, Joe Bryan. However, it was thanks to managing director Godfrey Herbert’s wide-ranging contacts that the trip took on an ambassadorial dimension. 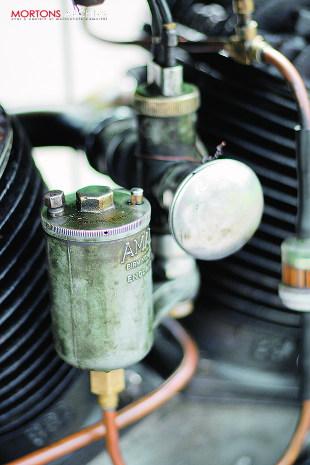 Herbert set up a joint venture with the Foreign Office and the British Trade Commission through which two world tour participants, senior BSA salesman BH Cathrick and The Motor Cycle staff reporter JP Castley, would open up new export markets by presenting a rolling showcase for the virtues of British motorcycles in the countries that they visited.

The pair set off on 30 August 1926 on two identical outfits. The Model G’s quickly detachable wheels proved to be a bonus over some truly appalling terrain, where punctures were commonplace. Yet, the 9.86hp V-twin motor shone through every climate and steep incline while hauling over nine cubic feet of luggage, faithfully photographed and described in John Castley’s regular despatches to readers of the Blue Un.

The trip took nearly two years to complete and its success led to BSA bestowing most of the globetrotting specification upon a World Tour replica that ran through to 1934. The Model G’s enhanced status as a strong, dependable mount allowed the company to offer it throughout the economic depressions of the 30s.

The late Len Vale-Onslow used to say that bikes like this were too solidly built for their own good. They tended to be conscripted for duty from 1940 onwards, which was the final year of Model G production, and some were even melted down to help the war effort.

Robert’s son Julian now stands to inherit the BSA, although what its recorded mileage will be by the time his name appears on the registration document is anyone’s guess. “I’ve warned him that if you ride daily on a machine of this age, you risk breaking down daily,” asserts dad. “However, taking things apart is how you learn and eventually you get it right, so we’ll have to see how he gets on. I’ve got a decent toolkit that he can have.”