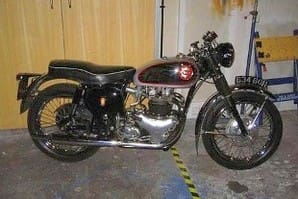 Though perhaps not as well known or as easily recognised as the iconic DBD series, the CB is still clearly and obviously closely related to its more famous sibling.

The Gold Star story is well known and has been well-documented, right from Wal Handley’s famous 1937 Brooklands triumph on the specially prepared Empire Star which led to the name, through to the model’s utter domination of the 1950s Clubman-class at the TT; domination so absolute that time was called on the class as it had become a Goldie benefit. Add to that victories in scrambling, grass-track, trials and any other discipline one can think of and it’s not difficult to see how the model attained the iconic status it enjoys today. 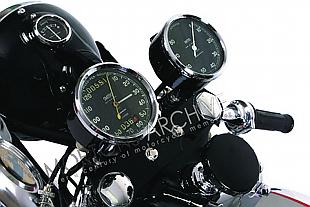 In the late 1950s and 60s, youngsters up and down the country dreamed of emulating the coffee-bar kings on their beautiful silver-and-chrome Goldies. Among them was Richard Clamp, now a 57-year-old maintenance engineer, then an aspiring Goldie owner. “I always wanted a Goldie,” he explains. Richard’s dream became reality in 1989, when he acquired this CB. Dating from 1954, it took Richard two years to restore and what he has ended up with is a stunning alternative to the more ‘common’ DBD34.

The CB bridges the gap between the earlier ZB/BB models and the later DB/DBD series, arguably being the first Goldie most of us would instantly recognise as such. Produced for one full season – 1954 – the CB features the deeper cylinder head and barrel finning that became synonymous with the Gold Star, while the engine is housed in BSA’s famous swinging-arm frame. It was a package which worked…there was victory in both 350 and 500 classes of the season’s Clubman’s TT, courtesy of Philip Palmer (350) and Alastair King (500), while there were countless other victories up and down the country every weekend in all manner of motorcycle sport.

Having been a Goldie owner for 18 years, Richard is in prime position to offer comment about ownership of the iconic singles and wholeheartedly recommends joining the enthusiastic owners club, as well as praising the help and supply from both C and D Autos and George Prew. The Gold Star has had specialists almost from the start, such is the love and devotion the model inspires – and there’s no sign of a let-up in that demand and desire for Gold Star ownership.