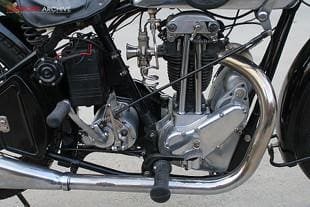 Living close to the North Devon Coast, Mike Dixon knows something about close-knit communities. The 53-year old looks after severely disabled young adults in a Leonard Cheshire care home, but he also mixes a love of surfing with an inherited preference for BSA motorcycles. “If somebody’s in trouble, you help out,” he says. “Everybody in my life looks after each other, though usually it's a bit more dramatic with surfing. Being chased by a 10-foot wave gives you quite a buzz when you're on a piece of plastic and I can tell you that I’ve hurt myself far more often on local rocks than I have on local roads!”

Motorcycling may be the ‘safe’ option for Mike, but his choice of mount is as deceptive as his laid-back demeanour. The machine is a rare, tuned example of the BSA B30-4, which was described to him as being similar to the machine campaigned in competitive trials by Marjorie Cottle during 1930. Its first owner, a Mr Beadle of Dartford in Kent, may well have been inspired to buy it by reports in The Motor Cycle about Cottle’s impressive rides in early-season events, such as the Cotswold Cup Trial. He seems to have paid extra money for a tuned engine, denoted by a small red star stamped onto the crankcase and two on the gearbox.

BSA offered a range of 18 model types for 1930, with a wide variety of enhancement and accessory options that could either be fitted at the factory or subsequently by dealers. The BSA catalogue for that year did not show a tuning kit specifically for the B30-4, although there was a choice of two different pistons. However, the 1931 catalogue listed an optional sports trim for the continuation model B31-3. Only one set of gearbox pinions appeared in the parts book for both years, though alternative ratios were listed for the larger models. A BSA Owners’ Club dating certificate confirms a despatch date of 2 July, very late in the 1930 season, and the club’s librarian Steve Foden thinks that the bike may have benefited from the early availability of some performance parts. A bag of original engine components is said to have accompanied the bike when it was sold to its second owner, so it is also possible that tuning work was carried out post-production.

The overhead valve B30-4 was a new design for 1930, built on traditional lines to be sturdy and reliable, and like all BSAs it boasted a first-class dealer and spares network. Its single-cylinder engine sat upright in the frame, a pair of fully-enclosed pushrods operating overhead valves with exposed rockers. In common with the B30-3 side-valver that shared its nominal power rating and cylinder capacity, the engine carried its oil in a sump cast into the front of the crankcase, with a chain-driven Lucas magneto and generator set directly above. An external pump bolted to the outside of the timing chest fed oil under pressure to the crankshaft bearings. 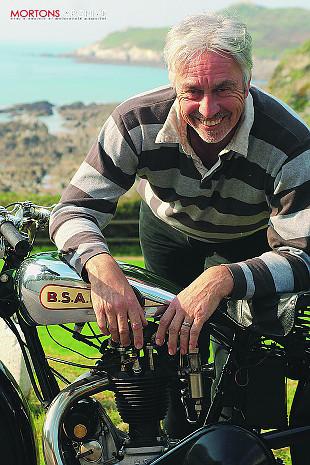 The chassis missed out on the forged steel backbone bestowed on BSA’s inclined-engine ‘sloper’ models for that year, but still featured a twin-downtube steel tubular frame. Chrome plating on the fuel tank came in the standard package, twin exhaust ports being an optional extra. For all that, it was built to a budget as a ride-to-work model, similar in style to middleweight variants of 350 and 500cc, but scaled down to qualify for the cheaper road tax rate of 30 shillings, for bikes weighing less than 224lb.

Despite modest dimensions, the B30-4’s performance was restricted on the open road by a capacity of just 249 cc and the lack of a fourth gear. Nevertheless, its motor was tough and offered considerable tuning potential for sporting use. This was proved when AE ‘Bert’ Perrigo set the fastest acceleration time during a special test in the 250cc class of the Cambrian Trial, winning a First Class Award for his overall performance. Meanwhile, Marjorie Cottle won a gold medal as part of a BSA ladies’ team in the International Six Days Trial and, though she fell during the British Experts’ Trial, rounded the year off with a special prize for the best performance by a lady rider in the Scott Trial.

'But then it started burning out spark plugs, one after another, so in exasperation I changed from an 18mm to a 14mm plug thread and tried a Champion N4, which has proved to be fine'

Mr Beadle eventually sold his tuned BSA to a fellow who restored it during the 1970s, for use in South West centre trials with great success. Although the bag of standard parts had disappeared, along with the original registration number, by the time that Mike took an interest two years ago, he simply thought that the bike looked fabulous and wasn’t particularly influenced by its state of tune or history. In fact, he was more concerned that the engine didn't want to start when he got it home. “The contact breaker points were loose, so I tightened them up and it did eventually start,” he recalls. “But then it started burning out spark plugs, one after another, so in exasperation I changed from an 18mm to a 14mm plug thread and tried a Champion N4, which has proved to be fine. I had the dynamo converted to a two-brush system by Stuart Towner, added a solid-state rectifier and rewired the rest of the bike myself, using a single length of three-core flex.” 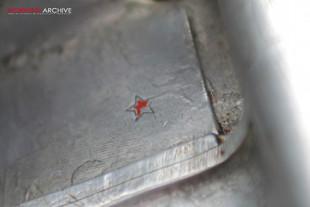 Pillion fitments are bolt-on additions to the standard rear rack. Front and rear wheels appear to have the original Jones rims, though these have been painted black. Although the fishtailed silencers are of high quality, they have the appearance of hand-made replicas. Both mudguards have been cut-down, possibly in keeping with the extra performance, and Mike sent these with the primary chaincase cover to be stove-enamelled locally. Otherwise, he has faced neither any major mechanical work, nor regular maintenance tasks beyond an annual check-over and oil change. “The motor was burning oil like crazy and so I've stripped the oil pump down, cleaned it thoroughly and reset it to suit the way the engine runs rather than the manual. It’s not completely cured, but with no direct lubrication to the top end I think I'll leave it to burn a bit of oil,” he adds.

The oil pump has a rear-facing indicator button that pops out to register a healthy oil pressure and I make a mental note to check for this after starting the engine. The owner’s manual recommends co-ordination of the valve lifter and ignition control levers as part of the starting procedure, but in practice the small cylinder capacity means that a healthy kickstarter swing is all that’s needed. Incidentally, the knurled dial with a little arrow on it, behind the cylinder barrel on the nearside, is an automatic primary chain lubricator. 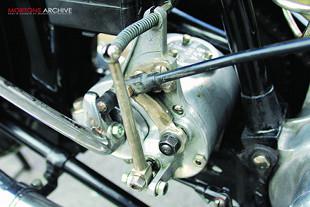 I set out to follow the scenic Devon coastal road north from Woolacombe Bay, within sight of which many ships have foundered on the Morte Point rocks. The BSA accelerates briskly through first and second gears, and is undaunted by the steep climb to Mortehoe village, where it chugs over the hill crest in top gear without fuss. The bike’s low weight and excellent brakes are advantageous in the narrow, twisting lanes that lead down to Lee Bay, and I’m constantly reining it in using the right-hand gearchange, which is slick and precise with a short lever travel. Engine braking amplifies the exhaust note to a pleasing depth and volume so that, bouncing on the sprung saddle whilst watching the well-greased girder forks absorb surface irregularities, I wear the grin of all classic riders who wouldn’t rather be on any other bike at that particular moment.

'That 2.49hp rating would seem misleading, although the digital speedometer that Mike has fitted records a top speed on level ground of just 65mph. This feels like a comfortable maximum, though undoubtedly the bike would go faster pulling the fourth gear that was fitted to some later models'

I was lucky enough to own one of these machines myself, when I lived on the Isle of Wight towards the end of the last century. Mine was the later B35-2 model, lacking the engine tuning and twin exhaust ports of this example, so I can appreciate the extra performance on offer here. That 2.49hp rating would seem misleading, although the digital speedometer that Mike has fitted records a top speed on level ground of just 65mph. This feels like a comfortable maximum, though undoubtedly the bike would go faster pulling the fourth gear that was fitted to some later models, particularly if a larger carburettor were also installed. However, even with three gears the B30-4 can keep pace with Mike’s 1954 BSA M21 outfit and acquits itself well as an everyday bike for light traffic conditions, with more than a dash of style. 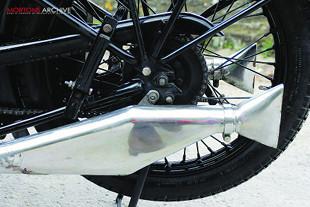 BSA produced the B30-4 for six years in various forms with minor variations, such as the handlebar-mounted instrument panel that topped the de luxe B31-3. The 2.49hp range followed an incremental series of model numbers for each production season, which ran from August to the following July, and this policy continued up to the B35-2 that preceded the B2 of 1936. New chief designer Val Page then re-engineered the motor as part of a consolidated B-group range for 1937, though its bore and stroke dimensions remained unaltered, and it endured as the B21 up to the outbreak of the Second World War.

Marjorie Cottle’s well-publicised victories would have been an effective endorsement at a time when The Motor Cycle was doing its bit to promote equality through Mabel Lockwood-Tatham’s series of articles entitled, ‘Through Feminine Goggles. In fact, compact and lightweight ‘two-fifties’ had been a cornerstone of BSA sales ever since the Model B ‘round-tank’ of 1924 did so much to broaden the popular appeal of motorcycling. However, gender discrimination extended to the highest levels of competition and manufacturing in Britain throughout the 1930s, so that the visibly growing female interest in motorcycling tended to be overlooked as a mere fad. 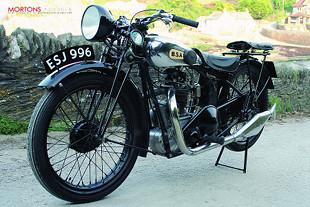 “If it’s anything like what Marjorie Cottle was using, no wonder she did so well!” says Mike. “I occasionally use mine for local shopping trips, just as she used to do, but I've also done a few runs over 100 miles and it can really motor along on the back roads. It is quite simply an amazing little bike for its time and gives me a pleasant surprise every time I ride it. In fact, it’s all the more surprising that BSA should follow it with the C11, which was an awful design with none of its character and robustness. I sometimes wonder what they were thinking of!”

As the sun sets over the Atlantic, Mike and I amuse ourselves by listing expressions that are common to both surfing and motorcycling, such as ‘tubes’, ‘barrels’ and ‘breakers’. He reflects on my suggestion that the similarity between the two groups goes deeper. “I think that’s true, at least for me,” he decides. “I do like hanging out with people who have something in common, especially those with a ‘don't care what the weather's like, just get out and do it’ attitude! I know that both surfers and bikers can sometimes go to extremes, just to escape the herd, but when I’m on my bike I tend to go riding around the moors and park where there’s a sea view and a pint. That’s the best combination of all.”