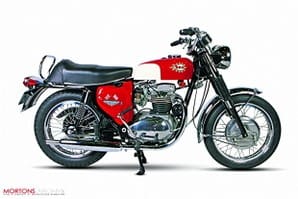 Though the Spitfire moniker doesn’t carry the same evocative connotations as say Bonneville or Black Shadow in motorcycling arenas, it is surely one of the great model names, whether it’s on a Rolls Royce-engined WWII fighter plane, a Triumph sports car or a rorty BSA twin.

BSA first used the Spitfire (‘A person given to outburst of spiteful temper, particularly female’) name in 1959, for the USA-market ‘Spitfire Scrambler.’ This was essentially a Gold Star scrambler, fitted with a tuned A10 engine. The Spitfire Scrambler listed until 1963, by which time the cleaned-lined unit-construction A65 was available.

So, the Spitfire name was destined to be switched on to one of the new models – and in 1964 the Spitfire Hornet, a model in much the same vein as the earlier Spitfire Scrambler, was launched. This was followed in 1966 by the first road going Spitfire, the Spitfire MkII Special, and was BSA’s new range leader.

The first year Spitfire roadster was visually striking and undeniably glamorous machine. With a bright red glass fibre four gallon petrol tank fitted for the UK market, or svelte red-and-white two gallon item for the US, the model also boasted the 190mm full-width front hub previously seen on the Gold Star, 10.5:1 compression ratio, racing cams, alloy rims and twin Amal Grand Prix carburettors. The model also heralded the first appearance of BSA’s ‘humped back’ dual seat, a saddle that was to be used throughout the range as the decade progressed. In the UK, retail price was £389.10s.0d.

For 1967, the Spitfire – now tagged MkIII – was somewhat ‘softened’ with the compression ratio lowered to 10:1 and Amal Concentrics replacing the GPs; changes that came about following some criticism of the earlier model. The following season, 1968 – as the model illustrated here – saw further changes for the MKIV, with the compression ratio down to 9:1 and the Triumph-designed twin leading shoe front brake replacing the 190mm Goldie item. It was to be the model’s swansong – it disappeared at the end of the year, with the new model range-topper the Rocket Three.

This US market Spitfire MkIV is another award-winning A65 from the collection of ace restorer, Essex-based show regular Derek Gothard.