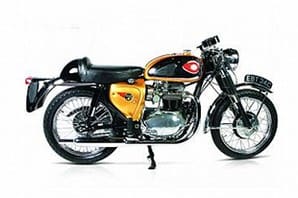 This A65 Lightning Clubman was not only the top of BSA’s range of unit twins in its day, it also topped the wish list of late BSA enthusiast and restorer Dave Smith. Dave died, age 58, at the end of 2007 of an unexpected illness. He had restored a whole collection of classics, with BSAs his favoured marque. Indeed, Dave had completed one fresh bike each year since 1995, attending both the April and October Stafford shows. The Lighting Clubman was the ‘2008 show model’. Dave managed to finish it and so his wife Jan, son Trevor and Dave’s brother Colin brought it along. Dave would’ve been gratified when it scooped – a deserved – best in class, in the Classic category, a fitting testament to his efforts.

Host of machines
Apparently, Dave had booked the Lightning Clubman in for this show and that’s why his family brought it along – they aren’t going to do any more shows. Dave had restored a whole host of machines over the years and the collection, which includes Spitfires MkII, II and IV, Super Rocket, Golden Flash, plus a couple of Triumphs, a Commando and a 1939 Coventry Eagle, will be sold off, but Trevor is going to keep hold of the Lightning Clubman. He explained: “My dad had one of these in 1965 and bought this one four years ago as a basket case. He’d always wanted another one and was able to finish its restoration.” Although Trevor doesn’t currently have a licence, the 30-year-old from Reading will hopefully one day take to the roads on the splendid BSA. 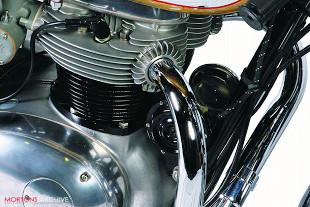 The A65 Lightning Clubman was unveiled in October 1964. Featuring a new, light alloy twin-carb head, sports camshaft and 9:1 compression ratio, the new model was clearly aimed at taking over the mantle of the Gold Star and Rocket Gold Star. This point was underlined by the fact all Lightning Clubman engines were individually bench tested – a process previously reserved for just the single cylinder Gold Stars.

The gearbox was fitted with a close ratio cluster with the camplate reversed to retain the normal pedal movement as the gear lever was fitted the other way round, to go with the rearset footrests. There were also clip-on handlebars as standard. All Lightning Clubmans were finished in metallic gold with chrome plated side panels and the BSA pear-shaped tank badges.

Based upon the A65 – which was launched early in 1962 – the Lightning Clubman provided the top of the range element and a sprinkling of glamour to the BSA unit twin range.  A first sop to the speedmen was announced in late 1963 in the form of the Rocket A65R, with a higher performance engine achieved by a high lift camshaft, special valve springs and the compression ratio upped compression ratio. The appearance was ‘racerised’ by the addition of chrome mudguards and a quickly detachable headlight, with finish to the tank and sidepanels flame red. An upgraded version of the Rocket formed the basis of the Lightning Clubman.