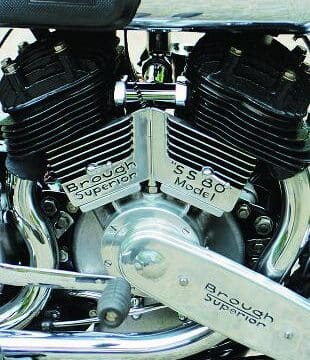 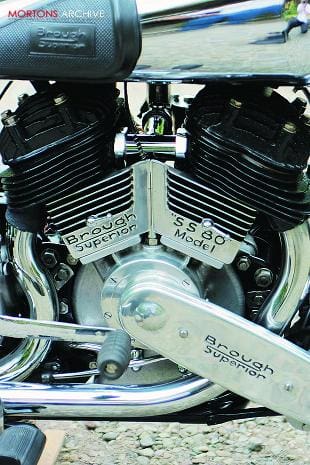 George Bernard Shaw contentiously wrote: “Titles distinguish the mediocre, embarrass the superior and are disgraced by the inferior.”

Yet, the title of ‘The Rolls-Royce of motorcycles’, suggested by HD Teague, writing in The Motor Cycle of 12 April, 1923 during a road test of the first production Brough Superior SS80, caused no embarrassment to George Brough.

The SS80 had, after all, been heralded in its maker’s own words as ‘the neatest-looking and most luxurious sporting machine offered to the public’.

Superlatives were the natural stock-in-trade of George Brough, who appeared quite unburdened by false modesty, and he promptly adopted this newly conferred accolade as the advertising slogan for his motorcycles.

The title has never been seriously refuted. Indeed, inspectors from the world’s most prestigious car maker could find no grounds for defamation when they visited the Haydn Road works in Nottingham where Brough Superiors were assembled. No doubt they were reassured by George Brough’s oft-repeated tenet that ‘no motorcycle, if it is to be good, can be cheap to buy’.

Brough Superiors have never been cheap and, even today, 66 years after manufacturing ceased, are among the most expensive of all motorcycles. Like their luxury car counterparts, they are known to be well engineered, beautifully finished, quiet and powerful, with a cachet of exclusivity.

Mike Starr admits that it was the mystique surrounding the marque that caused him to consider Brough Superior ownership, when an advertisement in Old Bike Mart for a 1935 SS80 Special caught his eye.

“I’d always wondered, could this machine possibly live up to its reputation?” says Mike, 62, who is a long-time member of the Vintage MCC. However, he was careful to check the machine’s provenance before agreeing to the purchase.

The vendor claimed the bike had undergone a nut-and-bolt restoration at the skilled hands of Dave Clark, technical historian for the Brough Superior Club, following an earlier tinware refurbishment by John Fisher. Mike spoke to both individuals, obtaining from the Brough Superior Club’s machine registrar a copy of the original works record card. This confirmed that everything matched its original specification at the time of registration on 1 October 1935.

A university professor in the field of pharmacology, Mike retired from academic life in 2001, shortly after buying his Brough Superior. With more time on his hands to enjoy riding, he was relieved to find that his new mount needed very little work to suit his tastes.

Mike added a period Lycett sprung saddle, unkindly known as a ‘flapper bracket’, for his wife’s pillion comfort. He considers a modern bolt-on rear view mirror to be a practical necessity in modern traffic. 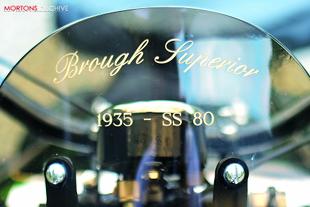 The bike’s engraved plastic flyscreen is rather special, however. Inspired by screens that he had seen fitted to other Brough Superiors, Mike cut out a profile in flat polycarbonate and simply heated it in an Aga cooker until it drooped into shape against a solid template.

“I added the bike’s details using a machine at the university that would normally engrave brass nameplates for lecturers’ study rooms,” admits Mike. “It saves me having to answer the most obvious questions each time I park it!”

By contrast, George Brough was always keen to answer queries, often publishing his replies, since they afforded an opportunity to promote his products.

George had learned the value of publicity while working for his father, WE Brough, who also conferred a working interest in the motorcycling field and the financial means to pursue it.

George was also a talented rider, winning more than 200 awards in sprints and hill climbs, speed trials and road races. However, his true genius showed in an ability to put his ideas into practice, thanks to unshakeable self-belief.

Diverging amicably from partnership with his father immediately after WWI, George erected his own premises in Haydn Road, Nottingham, where he commenced production of multi-cylinder motorcycles to meet his own superior standards. 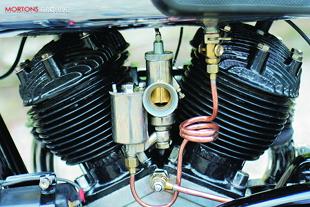 ge preferred to use bought-in engines and gearboxes, although these were re-engineered to his own specifications. Adept as both an instinctive stylist and an innovator, he was quite willing to modify his output to suit individual customers’ requirements.

HD Teague’s published accolade proved to be no mere sobriquet, since the Rolls-Royce comparison arose from more intrinsic qualities.

Brough’s bespoke engineering never failed to result in a dependable, well-built mount. This was because each machine was assembled twice: once to verify component fit to the satisfaction of works manager Ike Webb, and a second time with every part painted, plated or polished to a high standard of finish.

Only once the completed motorcycle had been road tested to its full potential would George Brough personally certify that this was, indeed, a Brough Superior product worthy of the name.

As a result, so few units were manufactured that owners enjoyed the additional kudos of exclusivity. George Brough reinforced this impression in the advertising copy that he wrote personally, while promising his customers an after-sales service to make them ‘the pampered darlings of motorcycledom’. 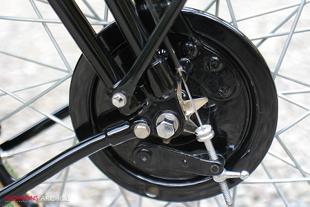 The SS80 model, introduced in 1923, derived from George Brough’s own 1000cc JAP-engined racing ‘specials’. The most famous of these, latterly nicknamed ‘Old Bill’, became in 1922 the first side-valve motorcycle to lap the Brooklands circuit at a calculated 100mph.

Each production example was sold with a guarantee that it had exceeded 80mph in fully equipped road-legal form and purchasers were invited to witness in person the bike being put through its paces.

It proved to be the firm’s sales mainstay throughout 18 years of production, during which it outsold the more glamorous overhead-valve SS100 by a factor of almost three to one.

The SS80 was subsequently offered in two forms: the 25bhp twin-cam Standard and the 30bhp four-cam De Luxe, both engines being specially made by JAP.

Following engine revisions in 1933, a new model, the SS80 Special, was launched two years later. This was aimed, in George Brough’s own parlance, ‘to make BS ownership possible for hundreds who formerly could only heave covetous sighs’.

Priced at two-thirds the cost of its ohv stablemate, the updated SS80 used a side-valve AMC V-twin engine, preferred for its reliability. The engine was basically a badge-engineered Model X Matchless unit, with cylinder barrels from an AJS Model 2 to redirect the exhaust port angles. The motor’s low-revving flexible power was equally suited to solo work or the attachment of a ‘petrol tube’ sidecar.

'The engine was basically a badge-engineered Model X Matchless unit, with cylinder barrels from an AJS Model 2 to redirect the exhaust port angles. The motor’s low-revving flexible power was equally suited to solo work or the attachment of a ‘petrol tube’ sidecar'

The 1935 model that Mike now owns was one of the first built with the new engine. He offers me a ride, but my first few moments pass in silent absorption of the whole machine. This is a Brough Superior, after all.

The bike approaches visual perfection by combining a minimal diamond frame with a visually enticing V-twin, the whole topped by that sublime, streamlined saddle tank made from hand-formed strips of metal, soldered together.

On close inspection, the control layout offers a combination of the traditional and innovative. Inverted chrome levers with hidden cables operate the front brake and the valve lifters respectively, the clutch control and a smaller air lever being separately bolted on. 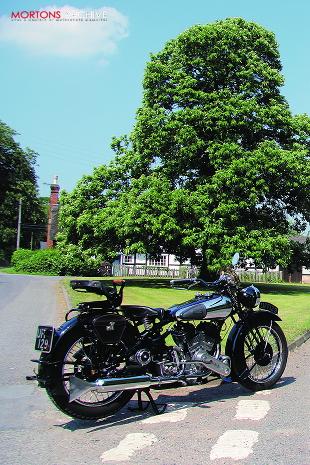 A left-hand twist-grip incorporates the ignition advance-retard, with a knurled ring beside it to switch between main and dipped headlight beams.

The single-compartment fuel tank’s twin CMC filler caps appear to have been specified for pure symmetry, so it’s a pity that they are prone to leakage. In common with many Superior owners, Mike never exceeds three-quarters full.

No prop stand is fitted, but the bike has a centre stand that is far more straightforward to use than individual lifting stands for each wheel.

I settle into the Lycett Aero saddle, grip the wide Amal Touring handlebars and sense considerable length in the front end. The impression is reinforced by girder forks, which offered a £15 saving over the Castle bottom link forks fitted to the De Luxe model. This machine has the latter type’s front mudguard with deep rear valances for improved weather protection.

The single-float Amal carburettor requires a touch of choke from cold, but the motor isn’t overly fussy about ignition retardation. An easy swing on the kick-starter fires the low-compression motor without drama.

First gear selection requires an up-shift of the foot lever, then down for the three subsequent ratios. The action makes use of thigh muscles more than those in the right foot, such is the extent of lever travel. An unhurried arc is necessary to pass cleanly through whatever notches and neutrals might lie in wait within the Sturmey Archer box.

I let the low-revving motor pull top gear around the minor roads that entwine Mike’s home in the Shropshire countryside. Slight inclines encourage ignition retardation, accomplished by rolling my left wrist forward, and the bike seems happy to drop down to near-walking pace without troubling the gearbox.

It is the lengthy gear lever action that provokes the first drama of my ride. Approaching a sharp left-hand bend with the clutch still in and my right foot off the foot-rest, while making the lengthy transition from third to second gear, the chassis lets me know that it isn’t happy by oscillating the handlebars as I lean into the turn. 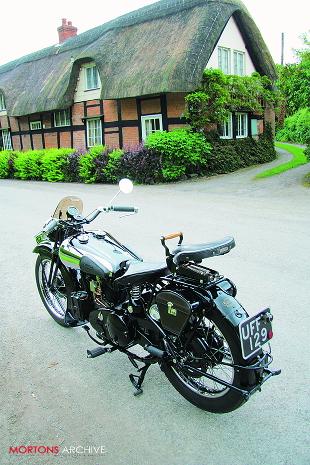 Lacking rear drive to steady the machine, I dab the spongy rear footbrake for stability. Obviously, I should have set up the corner far earlier than I’m used to on post-vintage machinery. Checking the steering damper and tyres after the event is no substitute for thinking ahead!

Remembering TE Lawrence’s words from The Road, “A skittish motor-bike with a touch of blood in it is better than all the riding animals on earth,” I set off again in search of a harmonious association with this quirky motorcycle.

Gradually, the Brough Superior reveals its virtues. Its riding position is upright sports-tourer, with a deceptively unhurried demeanour, while the two-into-one silencer is surprisingly quiet at all speeds, heightening the Rolls-Royce analogy. The whole machine succeeds by amounting to far more than the sum of its parts.

Yet it would appear that George Brough’s dependency on bought-in components contributed to the sudden demise of motorcycle manufacturing at Haydn Road. The military demands of WWII altered the infrastructure of component supply, so that outsourced parts for quality motorcycles were simply no longer available.

At the same time, the firm had done quite well out of wartime precision engineering contracts, earning a high reputation in new markets. Ultimately, Brough’s refusal to settle for second best is what sealed the motorcycle legend.

There will always be those who revere the mythology and Mike dresses the part to ride his Brough Superior. His genuine 1950s dispatch rider’s Armadrake Weathercoat was a present from a local farmer and perfectly complements a Davida Classic helmet and Halcyon goggles. 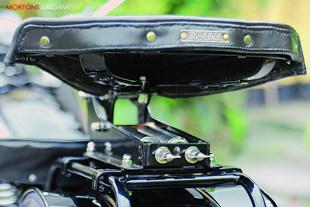 “So far, I’ve resisted giving my bike a name,” laughs Mike, well aware of a tradition that goes with Brough Superior ownership. Nevertheless, he has a distinction of his own to honour.

“I rode a Matchless G3 around Europe as a teenager and keep thinking that taking the Brough Superior over to France would be a fitting way to commemorate that trip, 50 years on,” he muses.

Shaw’s maxim that ‘he who can, does’ certainly applied to George Brough. However, its qualification of ‘he who cannot, teaches’ would risk a grave injustice to Prof Mike Starr, who is surely the type of enthusiast-owner Brough wished to see riding his superior machines.