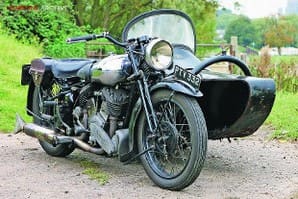 George Brough was no shrinking violet when it came to the publicity game and regularly reminded the world his motorcycles were built from parts made exclusively to his design and special requirements, ensuring his machines were capable of covering huge mileages at high speed, easy to maintain and durable.

Usually, our The Classic Motorcycle road test features are an appraisal rather than a road test. And rightly so, as each machine is the pride and joy of the owner who lovingly cares for it and has often lavished a huge number of hours and much money to return another piece of our history to the road. Each is a joy to experience but for me it’s an equal joy to hand them back in good working order. To this end we ‘classic testers’ usually don’t shoot off to cover hundreds of miles, ride endlessly through a more than adequate supply of English weather and add extensively to the subject’s wear. But thanks to Mike Smith, the owner of this 11.50 outfit, we did just that with his Brough. And it’s been a memorable experience. 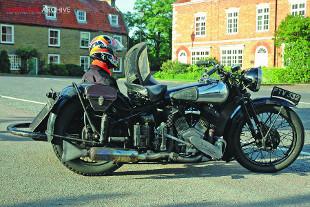 Enhancing the experience further is the fact the machine is presented with its battle-scarred original enamel and Mike knows its history stretching over the past 60 years. After all, it was his grandad Cyril Leppard’s machine many years ago. A founding member of the BS Club, Mr Leppard bought the 11.50 in the early 1950s and in his hands it attended the first Brough Superior annual rally 50 years ago. Cyril rode the Brough regularly until he emigrated to Australia in 1968, taking it with him.

Tragically, Cyril Leppard died in a motorcycle accident within a year of arriving down under and much later the 11.50 was sold out of the family to an Australian collector. After extended negotiations and a number of visits to Oz, Mike secured the purchase of his grandad’s motorcycle and brought it home to the UK five years ago. Mr Smith’s kindly offered to loan me a Brough for the BS Club’s golden jubilee celebrations in summer 2008, an offer which led to a lot of hard work for Mike and his friends as they mechanically stripped and rebuilt the big outfit.

Work completed only days before the club’s big event, FTV 332 had covered under 300 miles when I collected it from the Smith family home. Once transported to Cambridgeshire, I followed Mike’s instructions, giving it the once over with a set of ring spanners and changing the engine oil. And other than changing the oil again, that was the last time a spanner was laid on it during the extended test. 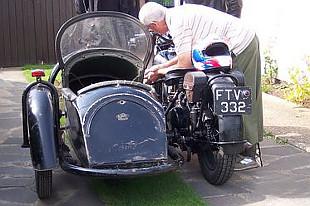 The plan, formulated over a brew, was to ride the 11.50 to Brooklands, a round trip of 250 miles, to see off the BS club touring rally which would take in TE Lawrence’s cottage and later Pendine sands before arriving at a site near Nottingham for the main 50th rally the following weekend, before the hardy touring group set off for Derbyshire. A week later Rosenthal would ride to the Nottingham rally site. Further mileage was planned locally in East Anglia with a view to clocking at least 500 miles.

Discussed within the warm confines of the local pub in front of a roaring fire early in the year, it all seemed a steaming good idea. And, overall, it was. But concerns regarding the reliability or the sense of cruising round London’s North Circular on a 70-year-old motorcycle were to pale as we sloshed along mile after mile in a more than adequate supply of typical English summer weather.

At each set of lights, cars, lorries and vans would pull alongside expecting to be first away – with just two exceptions all were wrong! Most memorable were the pile of lads in a builder’s truck on their way to work, 'Flipping heck (well, words to that effect…). What’s that?’'

At 6am on Saturday 9 August 2008 the 11.50, its tank brimmed with over four gallons of juice, was aimed at Cambridge. After a quick stop along the College Backs for photos it was onwards down the A10 to London, with the Brough lazily burbling along at 60mph. Finally, London’s infamous car park, the M25, was crossed, then into Enfield and later onto the North Circular, heading west. Having made light work of the A10, the 11.50 was even more confident on the North Circular. At each set of lights, cars, lorries and vans would pull alongside expecting to be first away – with just two exceptions all were wrong! Most memorable were the pile of lads in a builder’s truck on their way to work, ‘Flipping heck (well, words to that effect…). What’s that?’ was their abiding question for the next half dozen sets of traffic lights. ‘A Brough what? Never heard of it… goes, dunnit?’ 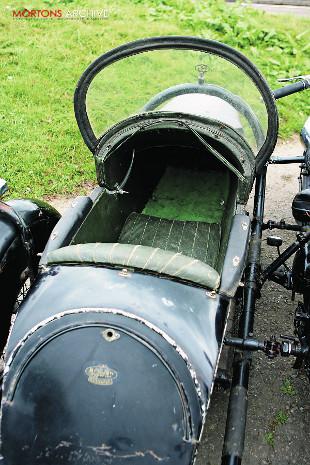 After a tedious crawl past a road traffic accident, which certainly warmed the Brough’s clutch, equipe Rosenthal (Peter, 11.50 and myself) finally cruised over Kew Bridge and the River Thames. Onwards through Kew, Richmond, Kingston, Thames Ditton and finally dropping down into Weybridge, then Brooklands and our only navigational error of the day. Our mistake? We followed the tourist signs, ending in a car park separated from Brooklands Museum by a wide but flimsy looking pedestrian bridge. The gateman was letting solo riders push across, but took one look at our rig… ‘No way…’ and eventually after a further three miles we entered through Campbell’s Gate. An approach so steeped in history it’s easily worth a three mile detour.

After a super Brooklands day of motorcycles, nostalgia and enthralling conversation we headed onto the A3 and London, in steady drizzle. Within two miles splutter, splutter, cough, cough, then silence as we rolled onto the hard shoulder. In 128 miles the 11.50 had drunk over four gallons of fuel. Luckily a gallon can was stowed in the sidecar boot but when we reached Thames Ditton and a petrol station, there was precious little wetting the tank bottom.

By the time we re-crossed Kew Bridge drizzle had given way to heavy rain and visors down we gunned the outfit onto the A406 – North Circular to you and me – and homewards. A posse of flower sellers near Chiswick ran into the road greeting us with a Tiller Girls like routine, lightening our spirits as the rain became even worse. Finally the A10 hove into sight and soon London was behind us. Stopping in a lay-by for more photos, we realised not only how heavy the rain was but also how hazardous the spray from even small cars let alone huge lorries made conditions. 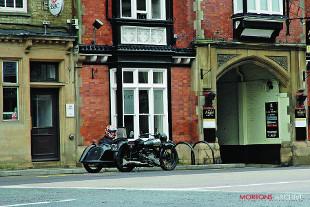 With most traffic pegging speed to around 45mph we followed suit and finally pulled up on our drive 123 miles and 3½ hours after leaving Brooklands. Hardly a record but the big JAP hadn’t missed a beat, the Lucas lights worked well enough to mark our position and despite Mike’s claims of poor braking, they too worked sufficiently well in the wet. On the pleasure front it hadn’t been a great ride but the satisfaction of reaching home safely and reliably was immense. Immediately pushed into the garage, a check later in the evening confirmed the heat from the cooling engine had dried the Brough and other than a little travel staining, she was ready for more of the same.

Following heavy overnight rain (yes, more rain) the 11.50 headed north on Sunday 17 August 2008 for the Brough Superior Club’s 50th Anniversary Rally at Holme Pierrepont, Nottingham. Deliberately avoiding the A1, equipe Rosenthal trundled across Fenland to Peterborough then motored up the A15 through Bourne and almost to Sleaford, before heading west on the A52 for Grantham and then Nottingham. Exactly 80 miles ‘door-to-door’ were covered in 1¾ hours riding time and for the last 30 miles, not a drop of rain in sight.

After a brilliant day fielding many Brough questions we’d not a clue how to answer and with warm sun on our backs, we headed home late afternoon. And for the first time we could appreciate the 11.50 rather than grit our teeth as we rode into more horizontal rain. Over the next few weeks with Mike Smith’s simple instruction ‘keep it for a while and ride it’ ringing in my ears, I did, visiting friends, taking daughter Lucy out for a spin and just for the hell of it. At times it’s hard work scribing for TCM, but, well, someone has to make the sacrifice! 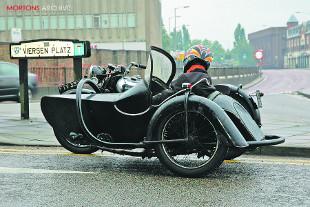 Despite this 11.50’s solo gearing, the lusty JAP makes light work of propelling over half a ton of outfit and passengers along the Queen’s highways. From a standing start 70mph is reached quickly and with disdain but in deference to its age and that the 11.50 is another’s treasure, we settled for a 60mph cruising speed. Its exhaust burbling, the V-twin simply gobbled up the miles as its maker intended. Mike had warned the brakes weren’t up to much and with no sidecar wheel stopper I was initially concerned but a pre Brooklands trip tryout confirmed it stops in 40ft from 30mph (speedo reading), far better than my beloved early vintage jobs, so braking wasn’t an issue even in the heavy, erratic traffic of London’s North Circular.

Except at low speed the outfit proved light and easy to steer and even 200-plus miles didn’t tire the driver. However, once familiarity crept in the sidecar wheel seemed keen to lift off the road on left-handers, even with a passenger who rather cruelly and very firmly declared; “Well, what else do you expect cornering at that sort of speed?” Who, me? At speed it holds a straight line or scribes a fast curve well but in common with many plots, is affected by strong side wind. It’s not a case of hanging on for dear life, but a firm hold of the bars is needed, whereas without heavy wind a relaxed style of driving suits.

Controls and foot lever positions suited a 6ft frame and size 10 feet well, but this is a large motorcycle and I guess my feet are no larger than those of the police who potentially may have ridden it during the day. Pursuit on an 11.50 Brough Superior… now, there’s a thought. 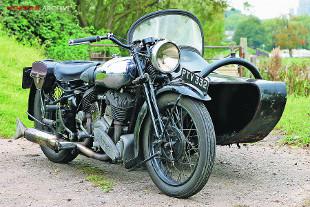 Worries? Well there was one, which happily had nothing to do with its insured value. As with my own machines, I’ve always taken the view that regardless of their value they’re motorcycles, not gods. As such they were built to be ridden and regardless of their agreed value ride them I will, and enthusiastically. After all, if it’s to be wrapped in cotton wool or displayed as a lifeless exhibit, or even worse hidden, what’s the point of their existence? However, back to the worry, which for me is the gearbox. Knowing what’s inside, I fretted and fretted. How would, or even could, it deal with over half a ton of all up weight which could be hustled along indecently quickly by a torquey 50bhp motor? Well other than a minor whine in third gear, which may be due to wear rather than design, it behaved superbly. But I’d still worry.

Within the limits of a 70-year-old motorcycle the 11.50 proved comfortable, even after a day in the saddle and, with my friend Alan Underwood piloting, the sidecar proved so too. Which leaves just one point of discussion – fuel consumption. The Brough certainly isn’t frugal, but it was damn good fun doing a tiny bit of harm to the ozone layer rather than adopting the far more responsible limp wrist approach. And surely everyone is allowed to be occasionally reckless.

Due to its size and perceived value the Brough Superior 11.50 isn’t everyone’s cup of tea, but if you like the idea of one, you won’t be disappointed.