Top performer among the competition machines on offer, the c.1966 Norton 350cc Manx prepared by legendary tuner Francis Beart and raced by Joe Dunphy and Keith Heckles found a new home for £61,980, more than doubling the top estimate and setting a new world record for a Manx sold at auction.

Hot on its heels came the modern Molnar Norton Manx, prepared and entered by Fred Walmsley for the late World Champion Barry Sheene, which sold for £55,200.

But it was a technological marvel from an earlier era that produced the sale’s best result when the 250cc Moto Morini Grand Prix racer from the 1960s fetched £83,260. 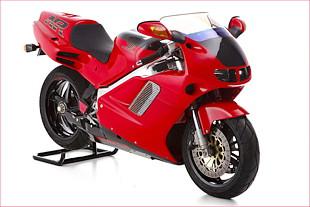 The Michael Buttinger collection of Japanese motorcycles provided one of the star lots of Bonhams’ autumn Stafford sale when the limited edition c.1992 Honda NR750 superbike – an oval piston, 32-valve, V4-engined technological tour de force, the like of which has not been seen since – sold for £57,500.

Ben Walker, head of Bonhams Motorcycle Department, comments: “In strictly performance terms the Honda NR750 wasn’t any faster than many of its more mundane contemporaries. What really blew everybody away was the bike’s sex appeal when it came to style: never before had a production motorcycle looked more like a two-wheeled Ferrari.”

Two of Britain’s premier marques – Brough Superior and Vincent – again put in their customary strong showing, the 1950 Vincent 998cc Black Shadow Series C selling for £57,500 while the 1940 Brough Superior 990cc SS80 – the last to leave the factory with a Works Record Card – made £54,050. ‘Barn find’ examples from both marques again demonstrated the healthy demand for such projects, the 1938 Vincent-HRD 500cc Meteor, owned by the same enthusiast for 60 years, selling for £25,300 while the seriously distressed and incomplete 1939 Brough Superior SS80 made an above-estimate £19,550.