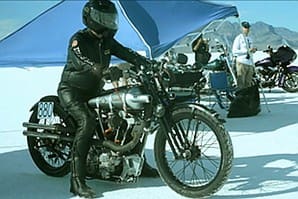 With 102 lots of iconic bikes available, the forthcoming Bonhams sale will have something for everyone.

Legendary superbike of motorcycling’s between-the-wars 'Golden Age', the Brough Superior was synonymous with high performance, engineering excellence and quality of finish. In the early 1920s, the name 'Brough Superior' quickly established itself as synonymous with excellence, often referred to as the 'Rolls-Royce of Motorcycles' – a phrase that was first coined in 1921 when the marque was barely two years old, and has followed it ever since.

Elsewhere in the sale, four Vincent motorcycles with a combined estimate of almost £100,000 will be going under the hammer.

Bringing a royal air to the sale, lot number 63 is formerly the property of His Majesty King Onyeama of Eke, Nigeria.

With an estimate of £2,200 – £3,200, the 1921 Rudge 499cc Multi’s original owner, King Onyeama, received it as a gift from His Majesty King George V, an enthusiast who favoured Rudge's products and had bestowed his Royal Warrant on the Coventry firm.

Ben Walker, Bonhams Director for Motorcycles, said, “We’ve got an incredibly diverse array of exciting motorcycles at the upcoming Banbury Run Sale. The breadth and overall quality of entries is probably the highest since we introduced the sale”.