“Buy your MPH from Ariel – it costs less” was the sales boast in Ariel’s 1932 catalogue of this model, the VH32 Red Hunter. Testing one in Motor Cycling, 20 January 1932, the scribe noted: “It seemed hardly likely that the rumoured 85mph would be obtained. A 90-guinea TT replica might be expected to give this performance when fitted with a Magdyno, an electric horn, and so on… but… a £55-15s machine?” However, the four-valve single’s performance didn’t disappoint. “For 1932 we must completely revise our previous views on the performance on the less expensive super-sports machines.”

Though the praise was glowing and the price remarkably cheap, the model was only to last for one season and Bob Oakes, owner of this stunning example, reckons that there’s only about a dozen extant worldwide. “I really didn’t expect to find one,” explains experienced Ariel restorer Bob, “as Ariel went bust in 1932 and went back to the cheaper-to-make two-valve models.”

Bob explained how he came to acquire the rare VH32; “I discovered it via a work colleague. He knew an old chap who had an Ariel and then when the elderly gent died, about 10 years after I’d first heard about the Ariel, I went to have a look. I couldn’t believe it was a four-valve.” 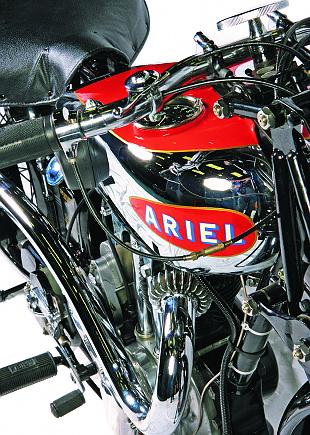 Eye-catching glory
That was 2005 and Bob has wasted little time in returning it to its eye-catching glory, the black, chrome and red beauty wowing the crowds at Stafford in April on is debut. Bob explained that the restoration had been relatively straightforward, owing to the fact that most of the Ariel was there, though any bits he did need he was able to source either through fellow owners’ club members or Ariel specialists Draganfly.

Bob, based in north-east London, passed his motorcycle test at the age of 16 in 1964 and when asked if there are any tips for would be restorers of this model, replied: “Well, try and find one first.” From Motor Cycling’s glowing report of 1932 though, one would have imagined that the model would have flown out of the showrooms. But one has to remember the times – the world’s finances were in a perilous state, following the 1929 Wall Street crash. Ariel, bravely, had attempted to buck the trend of trying to survive with cheap ride-to-work models and catalogued a whole host of glamorous machines, including the OHC Square Fours, sloper singles – with two and four-valve heads – and of course for 1932, the VH32 Red Hunter. Alas the plan proved futile and in late 1932 Ariel was placed in the hands of the official receiver; Jack Sangster came to the rescue, a new company came into being and a ‘rationalised’ range was introduced.

Unfortunately, one of the casualties was the four-valve Red Hunter – indeed, there had been a few problems with cylinder heads cracking between the valve seats. So for 1933 a two-valve replacement came into being, still tagged the Red Hunter. Updated, the model remained until 1959.