Chaps who were in the trade in the 50s have told me with authority that different batches of new bikes – and even different parts of the same bike – might well be finished in slightly different colours. This was understandable with the incoming metallic finishes, but it also happened with apparently more commonplace colours such as Ariel’s claret. As a result everybody has their own idea of what is right, and displays of restored Ariels often feature everything from bright red through to dark maroon.

You could take all this as a challenge, and struggle to find a match for some hypothetical standard, or you could follow the pragmatic example of Arthur Hodgkins, who decided to finish his 1955 Red Hunter KH twin in a shade that avoided the expense and effort of undoing another restorer’s work.

“When I bought the KH in 2001 it was fairly tidy, so I initially decided to use it as it was,” says Arthur, “and I wasn’t too worried that the various parts had obviously been re-painted at various times and were all different variations on the claret theme.” But then, on the eve of leaving for the Ariel Owner’s Club’s aptly named Long Run, the engine decided to misbehave, and that was the moment when Arthur decided that he wouldn’t be happy with the KH unless it was totally restored.

Newly rebuilt wheels
A previous restorer’s efforts had included newly rebuilt wheels embellished with really smart maroon and gold lining, and Arthur decided they were too good to strip down for refinishing. As a consequence he had the rest of the bike painted by the AOMCC’s Roy Liney to match the colour of the hubs, and while it’s possibly slightly more brownish than the mythically ‘correct’ claret, you’d have to be extremely pedantic, or wealthy, to have followed a different course.

Whatever, this is indisputably a smart motorcycle. Arthur always does an immaculate job with his renovations, and that’s not surprising as he freely admits that he prefers the restoration stage to the actual riding. Like many of us intend to – but seldom achieve – he keeps comprehensive photographs and written records of what he’s done and when.

Me, I like riding just as much, and I can’t wait to get going on this well turned-out bike, because I’ve never sampled this particular model before. Perhaps I’d better mention its background first, though, as – while most folk know that Ariel’s 650cc Huntmaster owed much to the BSA A10 – the 500cc KH is possibly the least well-known of all the British 500cc twins. 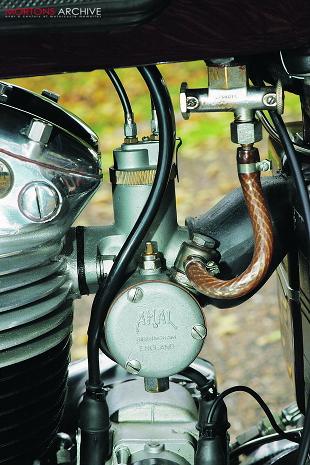 That’s strange, because it was one of the earliest and best of the breed. Triumph’s pre-WWII Speed Twin set the trend, of course, and BSA’s A7 was first out of the blocks after war, but the KH Red Hunter wasn’t far behind. It was announced in November 1947, and became available – along with a slightly less sporting KG variant – during 1948.

Val Page – one of the major figures in British motorcycle development from the 20s to the 50s – was largely responsible for these twins, so the competence of their design comes as no surprise. He had started work on an Ariel twin during WWII, and a prototype was running even before peace was declared. The three-year delay between that stage and availability was due to the difficulties of gearing up for civilian production (with demand for the singles still strong) rather than because of any developmental problems.

In fact, the twin proved to be pretty successful straight out of the box. Like the Triumph it used a plain bush as a timing-side bearing, but this did not appear to be a weakness on the KG/KH. Perhaps this was because its designers felt that the pulsating oil flow from the reciprocating pump used on Triumphs and previous Ariels wouldn’t do plain bearings any favours, and so they switched to a gear-type pump as used on BSAs.

The rest of the design pretty much followed contemporary best practice, with a one-piece crankshaft carrying a central flywheel ring, and valve gear operated by two cams with widely spaced lobes. This put the cams’ stress points close to the end-bearings, which reduced any tendency to flex, and also meant that that the tappets and push rods were well-enough separated not to interfere with cylinder block cooling.

One interesting aspect of the early models was the use of cam followers made in two pieces held fractionally apart by internal springs. That took care of residual valve clearances, but many owners failed to appreciate the need to hold the followers’ parts together while setting the valves, so the result was more clatter rather than less, and Ariel gave up on this neat feature after a couple of years. Now there’s a point to ponder the next time we accuse British manufacturers of being reluctant to innovate.

Few radical changes were ever found necessary with the 500cc twin engine, and the most noticeable up-date was in 1954 when it was given the alloy cylinder head previously used on the extra-sporty, but short-lived, all-alloy KHA model.

Conventional swinging arm
The cycle parts were more noticeably changed at the same time, as a conventional swinging arm replaced the clever-but-complex Anstey-link rear suspension. The new duplex frame was very effective – not surprisingly as it was designed to be adequate for the 650cc Huntmaster – and many considered it superior to the BSA chassis, although relatively few put their money where their mouths were.

History briefly covered, I can get back to riding the KH, and it doesn’t disappoint. A first kick start is followed by a steady and comparatively quiet tickover. The clutch lever is light to pull in, and first gear engages silently – which is a pleasant surprise – but a bigger surprise is that nothing seems to happen when I release the clutch. 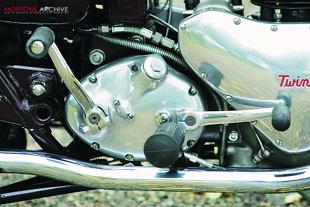 Actually, the drive takes up rather suddenly on just the last fraction of release, and Arthur later asks me if I think he’s got the clearances right. I guess so, because there’s still a bit of slack in the cable, and there is neither slip nor drag. I can only assume that skill or happenstance has resulted in a clutch with absolutely flat plates that lift perfectly cleanly, so there’s only a miniscule difference between full drive and total disengagement.

The effect is more noticeable than would otherwise be the case because an unusually large hand span is required to reach the handlebar levers. Arthur has re-used those that came on the Ariel, reasoning that they may have been the originals, but if so, I suspect that they’ve been modified, and new reproduction controls might have been preferable. Their purchase would certainly have been considerably more economic than re-plating the old ones!

Less flickable
Still, that’s a minor irritation once I am on the move, because the frame lives up to its reputation. It is perhaps less flickable than the duplex job used on its BSA stablemate, but none the worse for that. This is, after all, not the sort of motorcycle you’d buy if your intention was ear’oling (younger readers should translate that as ‘getting your knee down’) round tight bends.

Arthur rebuilt the engine with assistance from his Ariel OC friends – in particular Tony Peglar – and its characteristics also suit refined touring. In fact, they enforce it as – unless you are in a tearing hurry or mechanically insensitive – unpleasant vibration sets in at about 4000rpm and that discourages use of the potentially sporting performance. The top cruising speed is, therefore, effectively limited to around 60mph, but so what? If you wanted to go faster you’d have probably bought a 650cc BSA or Triumph anyway. Arthur is happy sticking to legal speeds, and as the engine provides more torque than many 500cc twins, there’s no reason to rev its socks off. 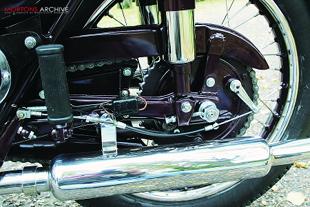 The brakes are the last of the single-sided line before Ariel adopted elegant full-width alloy hubs, and the front one works better than the rear. That’s interesting, because they are essentially identical, including the operation of the rear one by cable (a rod was used on the otherwise similar 650cc Ariel), and Arthur has even had them both relined by the same company.

The major high spot of the KH is perhaps its appearance, because I reckon this is one of the best-looking British twins. Some of that is due to the colour scheme – more interesting than the common funereal black, yet free of any undignified gaudiness – but more importantly the whole design sits together well.

By that I mean that while I’d expect the exposed battery and air cleaner to detract from the appearance, they somehow seem right when allied to the traditionally separate headlamp. If you look at a KH made the following year – when Ariel adopted a vaguely modernistic headlamp cowl – the separate components amidships suddenly look rather old-fashioned. 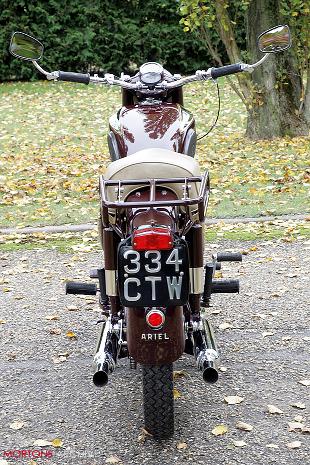 The light covering on the dual seat (recovered by RK Leighton) offsets any tendency to dullness, and it complements a petrol tank that is a minor work of art. Agreed, the chromed flutes are pointless and were obviously expensive to produce, but as a trademark styling cue they must have been invaluable. And while I normally have reservations about the attractiveness of the chromium plating on Ariels’ clutch dome – because the sheen is so different from that of the surrounding alloy – Arthur has achieved such a polish on the other engine components that it doesn’t look out of place here.

Such polishing is, of course, a departure from standard, and Arthur has made a couple of other subtle improvements. One of them deals with my pet hate about untidy universal clamps on luggage grids  – they almost fit everything, but are never exactly right for anything. So I especially applaud the barely-visible hooked brackets coming from under the dual seat to support the Craven grid’s horizontal mounting bars.

Arthur is a modest man who actually asked me to ride his Ariel – not in order for it to be featured in TCM – but simply so that I could comment on it. And he would cringe at exaggerated praise of either his workmanship or his motorcycle, so I’ll leave the last word to the judges at the 2005 Stafford Classic MotorCycle Show. Among the glittering array of machines there, the KH earned a Highly Commended award, and if you want a smart and capable tourer, I can think of few motorcycles that I’d commend more highly.