A prototype was out and about on the roads as early as autumn 1946 (appearing, in a spectating capacity, at a Brands Hatch grasstrack meeting) though it was not until late 1947 it was officially launched.

When it came, there was nothing particularly revolutionary about it – the man responsible was Val Page, an industry veteran who’d had spells with Triumph, BSA and earlier a 250cc twin project at Ariel, among others. It was just a good, strong, common sense design, with more clear thinking employed in deciding to make the engine unit suitable to slot straight into the chassis and running gear of the well proven singles.

During the 1950s, the 500cc twin was updated along the way, having been joined by a 650cc version – which wasn’t simply an enlarged half-litre job, but indeed owed much (nearly everything, in fact) to the ‘parent company’ BSA’s A10.

The 500cc model (by now the Fieldmaster) continued until 1957 while the 650 (Huntmaster) lasted until 1959. By then, Ariel viewed its future as an exclusive maker of two-strokes, so all four-stroke production ended in the summer of the last year of the 1950s. 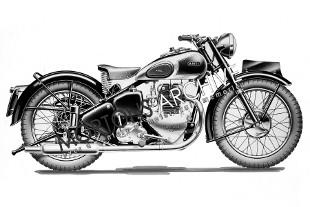 1949 KG De Luxe
Alongside the KH from launch, was the KG De Luxe, which had a lower compression ratio (6.8:1 compared to 7.5:1). Both the KH and KG were available with the Anstey-link sprung frame as an option, though it didn’t come cheap, adding £20 to the price.

1953 KHA
Code KHA (A for aluminium) the new version featured a light alloy cylinder barrel and head, fixed on the ‘old’ iron bottom end. Biggest visual difference was the attractive all over sky-blue finish – something of a departure for Ariel.

1954 KH500 Fieldmaster
The new frame, with swinging arm suspension, was adopted across the range (Square Four excepted) as was a new, all over-maroon finish and deep, tan dual seat. The engine boasted an iron barrel coupled with an alloy cylinder head.

1956 FH650 Huntmaster
Introduced at the end of 1953, the Huntmaster featured the swinging arm frame from the word go. Its engine was heavily based on a BSA A10 (though it wasn’t publicly admitted) and its launch led to decrease in demand for the 500. Nacelle and full width hubs came in 1956.

1957 Cyclone
Almost a ‘mythical’ motorcycle, owing to the Buddy Holly connection (he owned one) and the scarcity of the model, with just 240 built (depending on how you read the figures). Really, though, just a high compression ‘parts bin’ special.