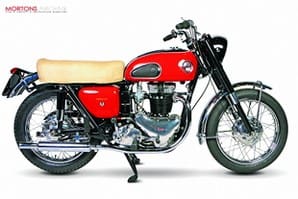 The Ariel Cyclone is not a particularly well-known model – but if there is one thing an enthusiast will know about the model, it’s that rock and roll god Buddy Holly had one. While the rest of the Crickets went for Triumphs, Buddy plumped for the rather rarer glamour red Ariel.

The model is especially unusual in the UK, simply because none were ever sold on the home market. It was a US-only machine, though the variation from the widely available Huntmaster wasn’t massive and in reality, it wouldn’t have been so much effort to have offered the Cyclone alongside the Huntmaster on all markets. Basic differences are the replacement of the valanced mudguards of the cooking model with blade-type items, US style handlebars and, er, that’s about it so far as re-styling was concerned. Internally more was done, notably the fitting of higher compression pistons, either of 8.2, 8.3 or 8.5:1. This example and Buddy Holly’s one both came with the 8.5 compression pistons. The change was marked externally by the stamping of ‘HC8’ on the engine, beneath the engine number, and represents the easiest-to-see evidence of it being a real Cyclone.

This example (which was made within three weeks of Buddy’s one and to exactly the same spec’) is owned by arch Ariel enthusiasts Bob Oakes, who restored it over an 11-month period. Bob bought it from America via eBay, then gradually pieced it all together. As the Cyclone shares most of its components with many of the others in the Ariel four-stroke range, parts weren’t the huge problem that might be imagined, with Draganfly Motorcycles and the Ariel OC supplied whatever was necessary. Even the front mudguard was plucked from the Selly Oak parts bin, being the same one as fitted to the company’s HS scrambler. Because the HS had a 21 inch front wheel and the Cyclone has a 19 inch item, that accounts for the gap between mudguard and wheel, creating the Cyclone ‘silhouette.’

The number plate on Bob’s Cyclone is for display purposes only and recognises the fact that it’s 50 years this year since ‘…the day the music died’, as Don McClean put it in American Pie, when 22-year-old Buddy Holly lost his life in a plane crash in Iowa. Buddy’s Cyclone is still extant, having been gifted to country music star Waylon Jennings, an old friend of Buddy’s and, following Waylon’s 2002 death, it remains in the possession of the Jennings estate.