From the point of view of the family man who may be in a position, finan­cially, to buy the cheapest of current new cars simply as passenger-carrying transport, yet who seeks, nevertheless, to stay a motor­cyclist, the combination represented by the 997cc Ariel 4G model and Watsonian 'Warwick' 6-6 full two-seater sidecar is a most attractive proposition. For one thing the owner of such an outfit at once possesses a vehicle capable of outstripping in per­formance most three- and four-wheelers. Moreover, the fuel consumption figures of the Ariel, even when the performance potential is employed to the full, and there­fore, the running costs, represent quite a lair comparison with thine of the type of car which the family man of limited means might contemplate owning.

That was the impression gained during the course of a recent Motor Cycling test of the biggest and most powerful Selly Oak machine in harness with the largest pro­duction 'chair' in Britain—probably the largest in the world!

The test was conducted throughout with attention focused on the passenger-carrying factor. On all long runs the sidecar was well laden; always there was at least one, often two, and occasionally three, the extra " body " being carried on the pillion—plus considerable luggage and, for the speed test, the sidecar was occupied so that the figures graphed should have significance to the sidecar-owning fraternity.

During that phase the Ariel engine, for which some 42 bhp at 5,800 rpm is claimed, was driving along a machine which weighs 435 lb. and pulling the sidecar and chassis (293 lb.), plus approximately 400 lb., the latter representing the weight of rider, passenger, kit, etc. The total tots up to more than 1,000 lb.—roughly half a ton, in fact. The Tester's Road Report panel indi­cates that the Ariel power unit dealt very efficiently with this load, particularly when taking into consideration also that the big sidecar area was inevitably affected by side, and three-quarter-front airflow to a greater extent than would have been the case with a smaller 'chair.'

Noticeable steering bias which, at theoutset, was the cause of slight driving fatigue, was eliminated completely by increasing the lean-out angle of the machine to nearly 2 in. at the head and also the toe-in (approximately 1} in.). Set up to these dimensions the outfit handled excel­lently at all speeds, provided that use was made of the steering damper. Fairly sharp throttle-opening action in bottom and second gears resulted in a surge of power which, despite the load, tended to lift the outfit frontally. In fact, care had to be observed in wet weather to avoid pronounced front-wheel drift on fast right-handers. In dry conditions a touch on the lever of the powerful front brake served to pull the machine around effortlessly. When turning to the left, the sidecar brake which, though coupled to the rear brake pedal, could be operated independently, was invaluable.

Stopping power received considerable attention, unexpectedly, during a long descent from Ilkley Moor summit down into Ilkley town. This short cut was undertaken in the mistaken belief that the northern escarp­ment would be as equally well engineered and surfaced as the. southern ascent. But it was a good test and, had the outfit been below par in this important respect, rider and passenger would assuredly have arrived at speed in Ilkley High Street 'baht brakes.'

Considerable mileage
Following treatment of this kind over a considerable mileage, both sets of shoes were adjusted by the Ariel fulcrum device. Naturally, with a sidecar of 'Warwick' dimensions, the side-pull rather affected specific front and rear braking distances recorded, but with the three brakes applied, the half-ton moving mass was brought to rest from 30 mph in 33 ft.

The best give-and-take running time for a mountain, moor and main-road journey was that recorded in the course of an 85-mile trip from Holmfirth, in Yorkshire, near the new television station, to North Birmingham, a point adjacent, in fact, to the Sutton Cold-field T.V. mast. The run was completed, pole-to-pole, as it were, in 120 minutes. Conditions ranged from a second-gear climb 499 up the steep northern bank of Rolm Moss, to 70-75-mph cruising along the rine Buxton-Ashbourne road.

Throughout the test the outfit could be cruised at its near-maximum speed for so long as circumstances permitted. Yet the power unit was sufficiently flexible to allow a top gear (4.7 : 1) gait as low as 15 mph, and only on gradients such as that of Holm Moss or the steep, walled by-ways of York.; shire, was it necessary to employ second gear Under these conditions of mixed going, an average mpg figure of 43-45 was noted. 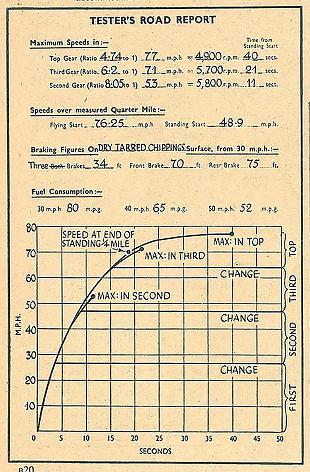 On such journeys, comfort for two occupants of the 'Warwick' is beyond criticism. Seat and squab springing is excellent; there is ample head and leg room, for the 'War­wick' 6-6 was designed by six-foot Ron Watson for folk of similar stature. Either, or both, passengers can 'sunshine roof' amenities, or saloon-car comfort; there are two Perspex side-panels in the windows which can be opened for ventilation when the canvas hood is fastened down.

The VG 21 chassis, on which the 'Warwick' was mounted, employs quarter-elliptic leaf springs at the rear, and these suspension arrangements are perfectly adequate. The Watsonian pivoted wheel and 'Silentbloc' mounting dealt very well with sunken drains and pot-holes and none of the passengers voiced complaint on that score —which, of course, is the main factor.

The 4G is coil-ignition equipped and the whole of the Lucas set, including the high-output dynamo and 20-amp.-hour battery, did its job faultlessly. 'Heavy rain once 'dissed' the contact-breaker, a snag applicable to any ignition system, but one which, on the Ariel, is easily rectified due to the ready accessibility of the contact-breaker unit. Note was made, incidentally, of the first-class headlamp beam.

Without doubt, the only regrettable aspect of the test is that Ariel's general sales manager, Bert Perrigo, has promised his two children a really long ride in the outfit when Motor Cycling have finished with it. Unhappily, by now, school holidays are well advanced, and Youth, which so the proverb tell us, Will Be Served, is probably already clamouring…