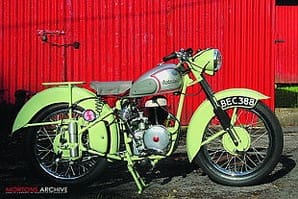 Billed as the ‘aristocrat of lightweights’, the Ambassador Supreme brought a touch of class to popular motorcycling on several continents. Its top-of-the-range Supreme model of 1951 boasted features such as balanced Road-Flow suspension and Super Glide transmission, despite its motive power being no more than a ubiquitous Villiers two-stroke single in standard roadster form.

A road test in Motor Cycling on 4 June 1953 endorsed the appellation thus, “If good manners, an ability for hard work and an impeccable appearance are essential prerequisites for a successful ambassador, then the ‘Supreme’ model manufactured by Ambassador Motor Cycles Ltd… is aptly named.” It went on to say that, “Such a combination of virtues can hardly fail to attract motorcyclists in any country.”

It was a bold gamble 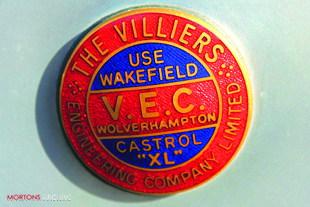 to pitch a new brand right at the top of the market, but such was the mentality of Ambassador’s proprietor, Kaye Don. Kaye Ernest Donsky, to give him his full name, was a Dublin-born motorcycle racer of Polish ancestry who quickly found top-level competition success when he switched to cars. His consistent style of smooth but extremely fast driving brought a clutch of lap and class records at Brooklands, and he won the inaugural Ulster Tourist Trophy race in 1928, at the age of 37. Taking to the water in similar fashion the following year, he piloted a speedboat from Dover to Calais and back in record time. Following an unsuccessful attempt at the World Unlimited Land Speed Record, in a Sunbeam streamliner at Daytona Beach, Florida in March 1930, he gained a World Water Speed Record in 1931 by coaxing a speedboat called Miss England II to speeds over 100mph on the Detroit River.

Brutally curtailed
Internationally famous following these heroic exploits, Kaye Don’s competition career was brutally curtailed in May 1934 by a practice crash on the Isle of Man’s TT circuit, in which his young mechanic Francis Taylor was killed. Charged with the criminal offence of manslaughter, he admitted racing on the public highway with no licence, defective steering and no headlamps in failing light. A Manx jury found him guilty and he was sentenced to four month’s imprisonment on the island.

Having originally acquired premises at the Pontiac Works in Ascot, Berkshire for the importation of American cars, Kaye Don returned to his passion for two wheels by establishing Ambassador Motor Cycles at the end of WWII. An early prototype, assembled under his personal supervision during 1946, combined a 494cc JAP side-valve parallel twin with a sturdy if somewhat dated set of cycle parts, although no more was to become of this solitary heavyweight design. 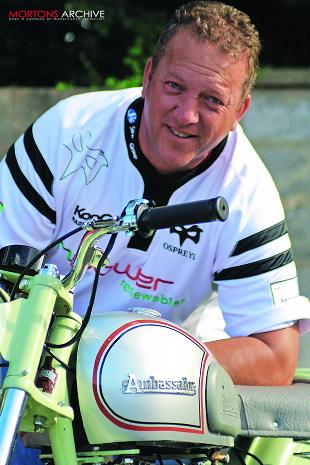 The first model to reach production was the Series 1 of 1947. Its Villiers two-stroke engine was a well-developed evolution of the popular ‘E’ series of 197cc units that had appeared in 1928, and which would form the basis of Ambassador products for the next decade. The Villiers 5E motor was superseded by the 6E in the Series III of 1949, after which the company began to expand its range. Although new models varied in specification, Ambassador always paid particular attention to the quality of cycle parts and finish on all its products. Telescopic front forks, partly developed in-house, replaced Webb girders on the Series V of 1950 and a year later the Supreme became the firm’s first fully-sprung offering, with plunger rear suspension. Its cheaper stablemates were the rigid-framed Embassy and the girder-forked Popular. The entire range upgraded to the latest Villiers 8E engine during 1953, while the Supreme gained larger tyres and 6-inch brakes, a new headlamp mounting, chromed nameplates, rubber fork gaiters and a valanced front mudguard. An electric-start version of the Supreme and an Embassy coupled to a sports sidecar were also listed for that year, completing a choice of equipment options that was the envy of many larger manufacturers.

Ian Baxter originates from Gloucestershire and has owned numerous Japanese motorcycles, though he had never considered anything British until a conversation with his father, shortly after his own 50th birthday, revealed a family connection with Ambassador. Ian’s grandfather had bought a Supreme, brand new, during 1953 from H&L Motors in Stroud, keeping it until he died. Ian, who is 53 now, recalls what happened next, “Dad said that we had lost contact with the branch of the family where the bike might have gone, so I went onto an online auction site and searched specifically for a 1953 Ambassador Supreme, just out of interest. This original-looking but tatty bike came up and although it wasn’t granddad’s, it fitted the bill exactly, so I put in a realistic bid and won the auction.” 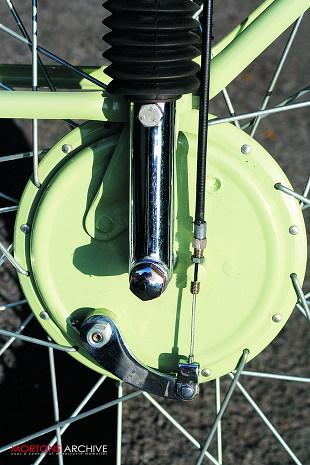 The machine was located in Cumbria, some 250 miles from Ian’s home in West Wales. Ian, who works as an independent financial advisor, sent a cheque to the seller straight away and then sat down for a hard think about what to do next. “I figured that if I brought it back home, there would be a fair chance that it would either sit in the garage untouched, or else I would strip it and simply leave it in bits, because I haven't got the skills or the time to restore it,” he admits. “In the end, I rang a professional restorer, ex-TT racer Steve Tonkin who lives up that way, asked him to pick the bike up and have a good look at it. His opinion was that it was not bad for its age but needed a fair bit of work, which he agreed to do for me.”

Steve Tonkin sent regular reports as the restoration progressed, and these revealed that the fuel tank had rotted and needed plates welding to its underside, while both mudguards had to be beaten free of dents. He despatched the Type S.24 carburettor for refurbishment by Villiers Services (01384 265797), located in the Black Country. New parts sourced over several months included a solo saddle, silencer and electric horn. Fresh paint was mixed to match, samples taken from inside the headlamp and fuel tank. Period photographs suggested that the handlebar, footrest and kneepad rubbers would have been coloured silver-grey; however, only the latter had survived and so these were reinstalled due to their rarity, once they had been thoroughly cleaned up. 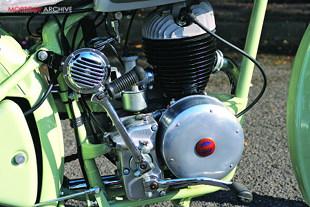 Consequently, the first time Ian saw his Ambassador other than in photographs was a year later, when he went to pick it up from Steve’s premises in Carnforth, Lancashire. “I just looked in awe and thought what a fabulous job he had done,” he remembers. After bringing it home to Carmarthen, Ian gave his bike its first outing to the Bristol Show in February of this year and since then he has ridden it to several local events, where it never fails to attract attention. He admits to feeling a little self-conscious, though;“Because I’m a big bloke I do wonder if I look a bit silly on it, as it feels so small compared to the modern touring motorcycles that I’m used to. It really is a strange experience for me every time I ride it.”

The motor is mounted high, increasing the bike’s appearance of compactness. I manage to install myself comfortably, although my knees protrude forward of the tank-mounted kneepads, and take to the Carmarthenshire roads with the Ambassador’s exhaust smoking heavily from cold. The blue haze clears soon after I slide back the choke vent in the air filter cover. By using modern lubricants, Ian has slightly reduced the 20:1 petroil mix specified for the Villiers engine, but there’s still a need to shake the fuel tank after the bike has been standing for a while. 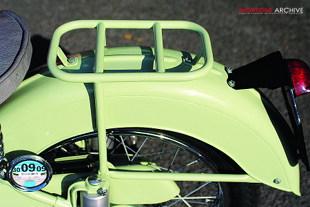 The one-up-and-two-down gearchange has a wide jump between ratios that encourages revs during acceleration, though the gear pedal is set rather too close to the offside footrest for a slick action. A weighty flywheel on the engine’s offside assists torque at low revs. Performance is decidedly not in the league to which Kaye Don was accustomed, but the bike exudes enough style for me to imagine the great record-breaker himself astride one, wearing spotlessly clean white racing overalls as was his custom. It is well suited for its intended role, however, and the smooth ride on this fully-restored example, with effective suspension at both ends, is unmatched in my experience of comparable British lightweights. Cush-drive rubbers in the rear wheel hub aid smoothness at low speeds and both brakes are progressive and powerful. A Lycett solo saddle with an extra layer of rubber cushioning was part of the standard Supreme specification, along with fully adjustable footrests, variable rear brake pedal height and a patented front mudguard positioner, the ends of which would have been felt-lined to slide easily between the front fork tubes. There is an air of quality to the engineering and overall, the machine has a presence far beyond its modest horsepower and capacity.

In keeping with its range-topping status, the Supreme received the four-speed 224cc Villiers 1H unit in a new swinging arm chassis for 1954. This became the 246cc 2H engine the following year and was supplemented by a Supreme Twin variant for 1957, powered by the 249cc Villiers 2T motor. Both the single- and twin-cylinder Supremes were dropped from the line-up at the end of 1958, being replaced by the twin-cylinder Super S with part-enclosed rear subframe. 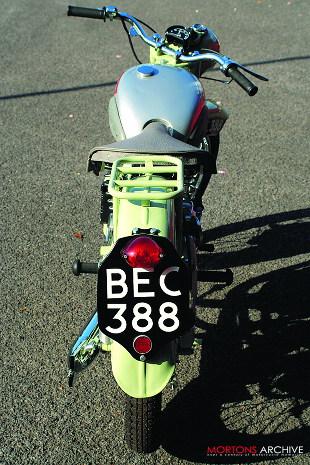 Ambassador’s combination of keen pricing, stylish lines and high quality of finish attracted buyers from as far afield as Australia and New Zealand, while West Coast distributor Hap Jones laid foundations for a network of North American dealers. However, the firm’s output shrank as the domestic lightweight market began to contract at the beginning of the decade, and Kaye Don sold the manufacturing rights to rival DMW in October 1962 before taking retirement at the age of 71. From July 1963 until September 1965, the final Ambassadors were built alongside DMW machines at the latter’s Valley Road Works in Sedgley, Wolverhampton, not far from the grammar school where Kaye Don had been educated.

Kaye Don lived to be 90 and though he never wrote memoirs of his fascinating life, is commemorated by Kaye Don Way, a street adjacent to the Brooklands circuit in Surrey. The Pontiac Works in Fernbank Road, Ascot is no more, having been demolished to make way for a cul-de-sac of new houses in St Christophers Gardens. Meanwhile, the memory of Ian Baxter’s grandfather is evoked by the 1953 Ambassador Supreme that he keeps as an authentic link to his past. “I’ve got two lads who both like bikes, so it might pass to one of them eventually, but my attitude is that I’ve brought a piece of family history back to life.”