Frequently, he bitterly criticized contemporaries who, lacking his own crystal-clear vision, offended against those views. But, though he was ever prepared to speak his mind — and what Yorkshireman is not? — Scott was no unproductive agitator, unable or unwilling to make his own contribution to the furtherance of science. Indeed, many of his ideas, and ideals, are as current now as they were in the days, nearly 50 years ago, when they were first enunciated.

Changing fashions, commercial crises, the inexorable passage of years — all these have tended to dim the glory that was Scott's. Now, 30 years after his passing, it is perhaps appropriate to reflect upon the contribution Scott made to the industry and to speculate upon the greater contribution which would have resulted had he been spared. What was Scott's achievement?

Most riders know that his basic design, patented in 1908, continued in production, developed, but with its unmistakable origin clearly visible until a couple of years ago, and that the latest version still adheres to the Scott engine design. 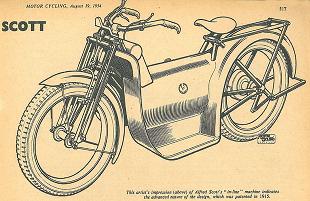 But how many appreciate the fact that Scott was the first manufacturer ever to build motorcycles designed entirely on first principles? The two-speed Scott appeared in 1908. It must have been designed at least a year, possibly two years, earlier. Up to that time, 'orthodox' motorcycle manufacturers had been little more than motorized cycle manufacturers, plodding steadily onward from the diamond frame; adding an engine to supplement pedals (except for such visionaries as Phelon and Moore, who had in some respects managed to break away from purely cycle frame design).

There was nothing in earlier, or even in contemporary, motorcycle design to guide the young Alfred Scott — still in his middle twenties — to produce the remarkable Scott motorcycle. It was his own achievement, from stem to stern. To an age accustomed to high saddled, sideslipping, vibrating, single-geared 'singles,' Scott brought a vision of what a motorcycle could be if its designer cared to make it so safe, smooth, quiet, clean and comfortable.

Scott's original engine design dated from the closing years of the 19th century, though not patented until 1902. But when the rather crude, belt-driven, deflector-plate unit of those days became the sleek, chain-drive unit announced in 1908, nobody knows — or will ever know. Suffice to say that, in his busy development work, Scott notched another 'first'. He was, so far as contemporary records can show, the inventor of the shaped deflector piston.

In the years that followed the Scott's entry on to the motor­cycling stage, the designer was constantly busy, redesigning and improving as experience demanded. He turned his attention to the TT Races. Better breathing, he decided, was needed if his machines were to be successful. Rotary transfer valves appeared to offer the greatest possibilities, and Scott channelled his energies in this direction, producing a number of designs, some gear-driven, some chain-operated. Result? In the 1911 Senior Race a Scott made the fastest lap… In 1912 a Scott won and in 1913, Scott made it a double. Then, in 1914 a burned-out magneto robbed him of his hat trick after Tim Wood had put up the fastest lap.

The 1914 TT machine was of great technical interest. Unlike previous Scotts, unlike any which were to follow, it had unit construction. The two speed gear was eccentrically mounted on plates which could be revolved within the engine/gear-house casting to alter the chain tension. Both cylinder heads were detachable (that feature did not appear on production models for a further 20 years); each cylinder had twin sparking plugs, supplied with current from a Bosch 'eight-spark' magneto. 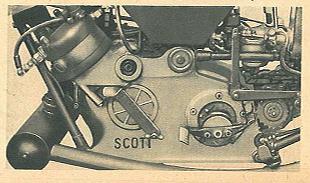 The induction system was through crankcase passages, to a reciprocating valve. This closely resembled a built-in rotary valve, but instead of the valve sleeve revolving it flicked backwards and forwards. It was driven by a short link attached to the connecting rod and, by suitable arrangement of the linkage, a definite 'dwell' was introduced just where it was needed for maximum efficiency. Why this simple design of valve was never further developed is a mystery.

In this machine, Scott anticipated today's racing practice by having pannier fuel tanks, from which the petrol was fed by pressure to the carburetter. Yes, in 1914! Each tank was mounted low down on the chain stays. Air pressure was built up above the fuel by a pump connected to the saddle springing — each time the rider bounced over a bump more pressure was generated in the tanks to keep the fuel flowing. Genius consists of the ability to be clever simply!

For the actual race, this fuel system was abandoned in favour of a conventional tank located above the engine. The reason? Just that the machines cornered too well, and the pannier tanks were forever being scraped along the road!

A couple of months later, war broke out. Scott concentrated his energy on the development of military vehicles; became enamoured with his unconventional three-wheeler and forsook his interest in the motorcycle. When the war ended, he severed his connection with the motorcycle works at Shipley and formed the Scott Autocar Co., at Bradford, with the object of manufacturing the Scott 'Sociable.' Thus, his last words on motorcycle design were in 1914 and 1915 in the unit-built 'racer' and in a remarkable machine which he patented in the following year. It is significant that, in both these models, Scott was turning away from his original conception, and moving to an ideal even more advanced. Had World War I not intervened, it is likely that the Scott motorcycle would have undergone drastic alteration. Those Scott fans who have resisted change in the layout of the famous two-stroke on the grounds that it is as Scott would have had it are, I am afraid, quite wrong.

Compare this specification of the machine Scott patented in November, 1915 — his final word on the subject. The thin two-stroke engine was retained, but mounted in line to enable shaft drive to be used. It was to be completely enclosed beneath a bonnet. The frame had been re-designed throughout. 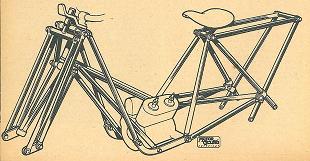 Scott was aiming at standardization, such as he later achieved with the 'Sociable' — a frame (and forks) in which all members would be of identical design. This frame met the requirement. Moreover, it was—so far as I can trace—the first time that any manufacturer of note had proposed a duplex frame with cross-over tubes supporting the steering head, as in the 'Featherbed' Norton. In a modified form, Scott anticipated that layout in his 1915 design.

Built-in legshields and footboards were other features. The radiator was mounted high up, atop the 'bonnet'; the petrol tank was fully enclosed. Undoubtedly, a three-speed gearbox, such as the 'Sociable' had later, would have been used.

Besides wishing to produce a frame in which all members were of the same pattern, thereby simplifying manufacture and radically altering the spares situation, Scott had a sound engineering reason for his change of plan. Good though his existing frame was, it did not offer complete freedom from bending and torsion strains. Witiv-shaft drive the last-named become even more acute, and Scott was determined to evolve a frame which would be free from such stresses. He did it in his characteristic way—within the rules of good engineering. No bent tubes for Alfred Scott! Built into triangulated structures, and pin-jointed, the straight tube frame can be free from all but tension and compression loads. In the 1915 layout, Scott employed that principle. The massive engine casting was the nucleus. All the frame joints were through-bolted, to quote Scott's own words in the patent application, "by being provided with the equivalent of a ball and socket joint which will restrain endways move­ment of the members but not a certain amount of angular movement about their point or points of fixing."

To achieve this, Scott proposed that each frame member should terminate in an eyelet, slightly larger than the securing bolt. The portion around each eyelet aperture was to be spherically domed, and suitably recessed washers placed on each side, so that the securing bolt could be tightened with the frame member in any atigular position, within limits imposed by the difference in diameter between the eyelet and the bolt. 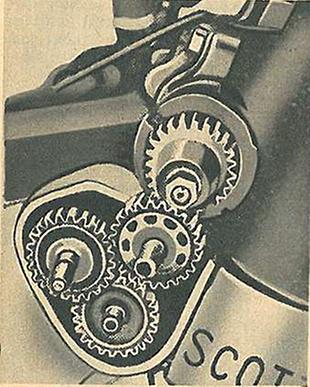 Such a frame, Scott argued, would be rigid both laterally and vertically, but each member would be relieved of all bending and torsional loads. In short, that it was the ideal motorcycle frame. He designed different versions to accom­modate engines of diverse types, and even patented a pedal cycle derivant. Anticipating his post-war " Sociable," he like­wise planned a light car (four-wheeled type), utilizing the same design philosophy, but equipped with link-type suspension.

At the same time, he turned his attention to motorcycle front forks, again aiming at the use of a standard member. This would mean the abandonment of the famous Scott telescopic fork, which the designer proposed to replace with one of swinging bottom link design.

There remains, now, a tantalizing question. Was Scott's 'last word' ever built, or did it remain just a brilliant idea on a war-time drawing board, to be discarded in favour of the three-wheeler when the days of peace returned? Whatever the truth may be, there is no doubt that it was a brilliantly fitting finale to the work of a great, an irreplaceable, designer and visionary.