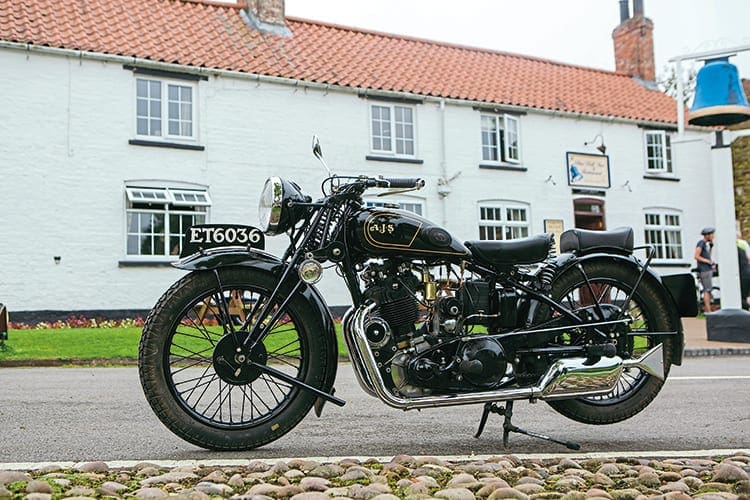 Drawing on track experience and research, AJS offered a much improved range for 1930. It was just a shame it came too late for the firm.

If ever a case needed to be made for ‘racing improving the breed’ then the AJS range for 1930 could be offered up as proof. The company had been seen to take almost 100 records in competitions at the tail end of the 1920s and the lessons learned from the stresses and strains on machines being put to hard use were to benefit the range, even if the intended market didn’t give a jot about racing or competition. Armed with information on wear and tear and its effects on components, the design team could make improvements to models, which AJS did. With eye-catching details such as inclined cylinders, twin port heads on ohv models and a subtle black with gold lining finish, the new motorcycles certainly stood out. But beauty is only a surface veneer and the automotive world has seen any number of pretty things with no substance. Thankfully, AJS not only made good looking machines but the designers had taken note of the engineers’ findings and these new models were robust and faster too.

If the backbone of the engine is the crankshaft, then the tougher it is the better. AJS stiffened the assembly considerably and added ball races to both sides of the shafts, two on the drive side for its extra strain. For the big-end, a double row of roller bearings sat in a Duralumin cage which kept the rollers in the correct position but kept the edges of the cage clear of the flywheels, so there was little chance of jamming. Cylinder heads were beefed up, alloy pistons relieved so expansion could take place and tubular pushrods operated Duralumin rocker arms splined to steel spindles.

As oil is the life-blood of an engine, the pump can be classed as the ‘heart’ – at least for our purposes here. Though the dry sump lubrication was largely unchanged – it having proved to work well – and lubed the crank, cylinder walls and timing chest, its external plumbing had been changed to tidy up the outside of the engine. An addition to the oil return was the provision for a drip feed to the primary chain, considered an important development at the time.

Housing these developments was a new style frame, considerably stiffer than those of before with larger diameter tubes and additional torque tubes bolted under the engine too. Some attention had been paid to the engine plates which now almost encircled the crankcases and did the stiffness of the whole chassis no harm at all.

Though the rear end was still rigid – the rider being protected from road bumps by a sprung Lycett saddle – the front suspension received slightly altered links to the girders, which meant the action was now parallel, plus there was a longer spring for more comfort.

In addition to these changes, there was a better shock absorber fitted and a friction type steering damper to tame the effects of 1930s roads. So, all in all, the 500cc AJS R8 package produced for sale looked tempting. And the cost of such attention to detail? Yours for £59-10s, sir. Shall we add on the latest electric lighting too, at only £5-10s…?

Sadly for AJS, world events were to have a hand in its future and with Wall Street stock market in America beginning its calamitous collapse on October 24, 1929, the same day The Motor Cycle published the details of AJS’s 1930 range and the actual collapse on October 29, suddenly the world was a very different place.

But what of this particular R8? It arrived in the Lingard stable after a long and protracted period of negotiation and was effectively a failed restoration. Some work had been done but thanks to the age of the bike and scarcity of parts, it had stuttered to a halt and been if not abandoned, certainly left alone for a good while.

“Some work had been done on it,” says Bryan, “the frame and forks had been painted, the forks had been rebushed too and the engine had been fitted back in the frame, though it wasn’t complete. I wasn’t too bothered by the work that hadn’t been done and was intending to check over what was completed as it’d been standing for a long time.”

What Bryan found when he put the bike up on his bench was the piston stuck in the bore which he dealt with by emptying a can of Plus-Gas into the cylinder and leaving it alone for a week. “Thankfully, it mustn’t have been too bad,” he says, “it freed off okay.”

On this model there’s no oil feed above the crankcase mouth and lubing for the top end involves a squirt with a grease gun on the rocker spindles and for Bryan, a dab of STP on the valve stems. Before that though there was a pushrod tube to make which he did out of some stainless steel tube. “It’s a telescopic item and it screws into the rocker box,” he tells me. 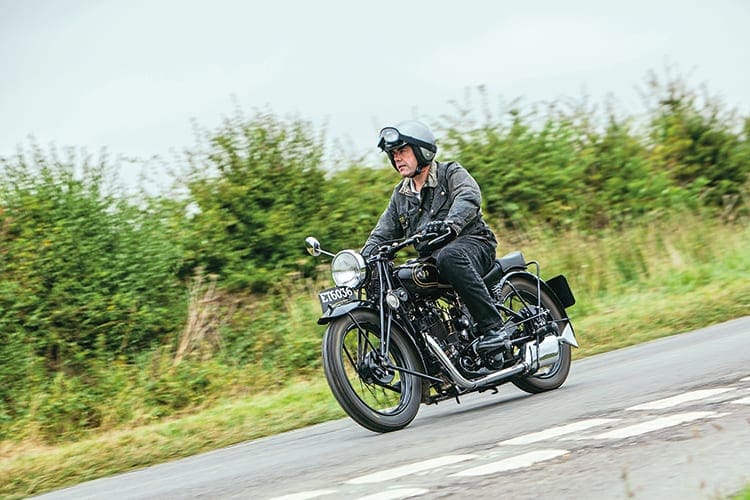