In this business, being involved with classic magazines, we do get a wide variety of telephone calls. Most, obviously, are from normal and sane folk, though there is the occasional fantasist who has stumbled across our magazine, found a telephone number and decided to ring up with either bizarre requests or strange offers.

Over the years, there have been a few who have been left deflated that the mid-70s Eastern Bloc two-stroke that has been sitting in their garden since 1987 is probably best left where it is, and won’t bring them untold riches, or that – because they’ve seen a Gold Star advertised for £10,000 ‘in the book’ as they flicked through it on the shelves in WHSmith’s – their great uncle Reg’s Bantam is worth putting on eBay with a fantastically high reserve while they peruse the holiday brochures for Caribbean cruises… 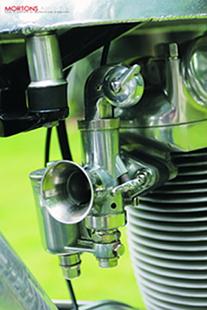 Others over-exaggerate what they have done in the course of the restoration of a machine, including one memorable story which pre-dates my time, regarding a chap in the Leeds area who spent an afternoon relating a tale to one of my predecessors about the painstaking resurrection of the Dominator ‘he’d’ restored. The story was duly published, as had been told, only for a somewhat perplexed gentleman to write in a few weeks later, enclosing pictorial evidence, explaining how he’d rebuilt the subject machine about a year before and sold it, exactly as it now stood, to the gentleman who was now claiming responsibility for its new lease of life…

Obviously, like I said, most callers are genuine enthusiasts with real machines and passion and commitment. But occasionally, I confess, experience teaches one to be a bit sceptical. And so when a chap called Graham Prior telephoned and said, “Would you be interested in doing a story on the AJS my father-in-law has built?” I wondered what he meant.

“You mean rebuilt?” I asked.

“Well, yes and no – he’s made most it himself you see” said Graham.

As the story emerged, and it evidently became clear this was the ‘real deal.’ Graham explained about his father-in-law’s engineering prowess and enthusiasm, finishing up with, “The Ajay really is something special – and I’m sure he’d let you have a ride on it.”

The wheels were set in motion, and I found myself journeying down to the south coast to meet up with the said father-in-law, Mike Lymm. Rather than returning the AJS to standard specification – as he had with the pre-WWII Ariel – Mike decided that he’d use the AJS as a basis for his own, bespoke trials-style machine suitable for a bit of cross country riding; a ‘green laner’ as we call them in England. 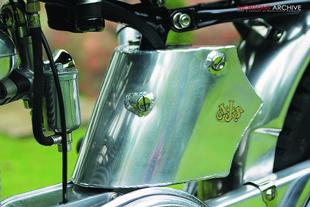 Mike’s initial idea was to build a machine on which to ride the famous Ridgeway trail, and that’s something he’s hoping to get done over the course of this year. But rather than just simply slightly modify what he was presented with, he went one step further. And then another step, and then another…basically, he’s ended up with what is a very personal machine, inadvertently showcasing his own considerable engineering skills. Much of the Ajay has been re-manufactured, in a style which doesn’t look out of place in any way, so that it takes some studying to realise that the shiny machine isn’t quite as it seems.

“It started off as a bit of fun!” says Mike, who is a man of many talents (he built his own house, and he restores guns and oil paintings, which are just a few examples of his talents) and a man who enjoys a challenge. “I used to ride trials a bit in the late 50s and now that I’m retired decided to build a bike which is from that era.”

But he didn’t just decide upon a rebuild of the AJS.

“I bought the machine locally in late 1999,” Mike says. “When I acquired it, it had a Norton swinging-arm fitted, plus a Norton fuel tank, while the exhaust on it was, I think, originally fitted to a car. My one regret is that I didn’t take a photograph of it as purchased.”

South coast home
The AJS had been raced around the fields near Mike’s south coast home, and had passed through the hands of Terry Whitlock, whose brother Michael was the man responsible for Whitehawk frames. Most of the Ajay’s history is a mystery, though Mike found out the Whitlock connection by chance when it was recognised by a friend, who had seen the machine in photographs years before, and duly dug out an aged copy of the Waterlooville Motorcycle Club’s Gazette, with the AJS in an earlier – albeit very non-standard – incarnation featured on the cover.

It’s no more standard now – practically all that remains as it left the factory in 1954 is the frame, the crankcases and the cylinder head. 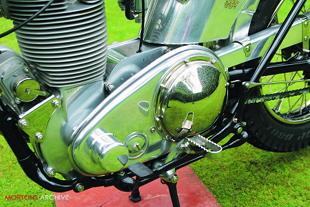 “I decided to make an alloy cylinder barrel, from solid, myself,” he says with the understated calm of a man who doesn’t believe in the notion of the word ‘can’t.’ Mike started with an eight inch diameter block of solid alloy, which was rough-turned on his lathe. Next, the ‘barrel’ went onto the milling machine, before it was finished off with a circular saw blade by hand. In total, the barrel alone took three months of graft, with the most time-consuming the ‘hand-work’ between the fins. After he’d made the barrel, he shrunk in a cast-iron liner. To go with his freshly made barrel, Mike bead-blasted the cylinder head and the crankcases, before dressing them by hand to a mirror finish. He also made the pushrod tubes and moved the holes for securing the barrel down in the crankcases too, for which he made bespoke draw bolts. “There’s a lot which went into that which is never seen,” says Mike.

Looking over the machine, Mike points out more and more of the bits he made himself in his home-workshop.

Front piece
The first thing Mike made was the chaincase, with the front piece machined from solid, while he then made the rest of it, to see if he could form alloy. With that a success he moved on. “I decided to have a go at making the fuel tank, too, so I made up a wooden mould around which to form it. I made two halves and then had then welded up by a friend – I can’t weld aluminium – before making the base and having that fitted too. It actually is made up of a total of six pieces.” The oil tank was constructed by a similar method, while the silencer was also made from bits and pieces, and formed by Mike. He also bent the stainless steel exhaust pipe himself too.

“I lost a few pounds bending that!” he laughs. “I built a furnace in a wheelbarrow in my back garden, with a vacuum cleaner underneath it. I heated up the pipe and then bent it around home-made formers – it was hard work!”
As well as all the other parts, Mike also hand-made all the nuts and bolts on the machine too. 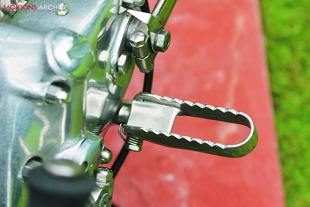 The suspension was another area in which he made his own improvements. At the front, the forks were remanufactured to be one-and-a-half inches longer, while the rear was raised too with home-built spacer attached to the suspension units.
“It’s to give more ground clearance,” Mike explained, “But also, because I’m quite tall, it gives me more room on the bike.”

Mike also remade the engine plates himself too, while the magneto platform was made from stainless. He made the mudguard brackets, with special concave washers, as well as making the aluminium brake back plates – and the wheel hubs! Neat touches abound, such as quick release tommy bars to enable the speedy removal of the wheels. Mike did buy the stainless spokes, though he managed to salvage the Dunlop rims which came with the project; he wanted to keep them as they’d clearly been with the machine a long time.

The carburettor was something upon which he lavished plenty of time and attention, making all the internals himself, including the slide. Mike also designed and made his own choke, which sits atop the carb and is operated directly there, rather than by a separate handlebar-mounted lever. Talking of levers, incidentally he made all those too – both those for the handlebars, and the foot operated ones as well.

So, on a gloomy day on the south coast, Mike wheeled the Ajay out of his garage into the drizzle and pressed it into my care. “I’m not too worried about it getting wet and dirty,” he says, “As I intend to use it off-road, so it’ll need to get used to it! Mind you, this’ll be the first time it’s got wet.” 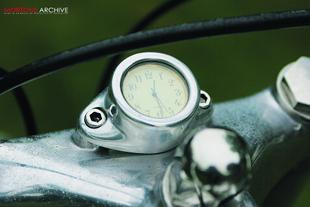 I settled into the saddle, noticing I was quite a long way off the ground. Not being anywhere near as tall as Mike, the ergonomics of the machine certainly felt as if it was tailored for someone else. The span on the handlebar levers also demanded my short pinkies be fully extended, while the foot levers – especially the gear-change pedal – felt a bit far away and a little out of comfortable reach for my size nines too. But, as this is Mike’s machine, these aren’t complaints, merely observations, and if we’re honest, wouldn’t everyone rather have a machine which suits them and them alone, and to hell with the rest! This personalising of the bike makes it, well, more personal, and that’s something which was playing on my mind as we set off, with me on the Ajay following Mike on his Ariel plus Mike’s son-in-law, Graham, on his modern ‘trailee.’

The Ajay runs as well as it looks, and quite soon we were buzzing along happily, despite the greasy, mud covered roads we were traversing. I must confess to a slight feeling of guilt – when we’d stood looking over the Ajay in Mike’s workshop, it was so pristine. Now, it was mud-splattered and soaked…

From the saddle, one does feel rather perched upon the machine, and it also feels somewhat strange riding on the road upon a machine with such Spartan equipment. The handlebar area – looking down from the riding position – has none of the clutter many machines do, as the speedo is mounted down by the rider’s foot plus the lack of a headlight means the rider looks directly onto the front wheel and the road. 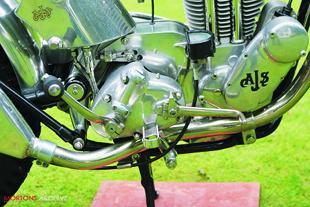 Braking is as would be expected – very good, no doubt helped by the machine’s low weight. It’s a solid, well-planted machine, which I’m sure will feel just as at home off-road. In fact, Mike did offer me the opportunity of taking it down a few of the – increasingly muddy and puddle-strewn – tracks in his locality, but I politely declined, as the rain got heavier, and it wasn’t only the bike’s which were getting a proper soaking…

Instead, we headed back to Mike’s home, for a welcome coffee and the chance to look over the now filthy machine for a bit longer.

As we stood looking over the Ajay, Mike commented, “I’ve tried to keep it in the 50s image, which I think I’ve succeeded in doing, but I also wanted to personalise it too.” And one can only stand back and applaud his endeavours – the highest compliment one can pay a special is it looks as it was made by the factory, and this one looks like it was made by a factory staffed entirely by precision-jewellers, such is the polished gem which has resulted.