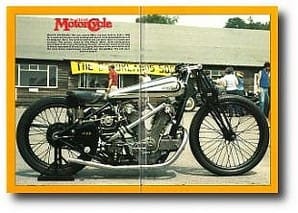 The massive 996cc supercharged AJS twin was certainly handsome, but it was a thorough-going pig to ride. So declares George Rowley, for­mer works racer and trials man for the company. "We were down at Brooklands, passing-out R7 racers, when Bert Collier came over and said: 'You are our Number One, you ought to take the blown twin round for a lap or two', but I wasn't having any. I'd seen Reg Barber on it, and I knew what would happen.

"If you ask me," I told Mr. Collier, "I'll say no. If you demand that I ride it I will, but only if you take the respon­sibility.

"Well, a fortnight later they brought the twin–along to the track. Jock West was there, trying out some Triumphs, and Jock would have a go at anything. He got it round at 90-odd, all right, but it was handling like a camel. Then Reg Barber got on it. Out from the Mem­bers Banking he came and, just where the wind always caught you, over the top he went. Wallop… Reg had a broken leg!" 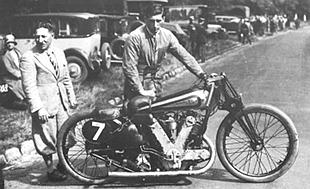 That, though, was in 1932, a year after the AJS name had been acquired by Woolwich-based Collier's, the Mat­chless folk. For the start of the story we must go back to Wolverhampton some time in 1929, and to the original A. J. Stevens concern.

"It was Nigel Spring's idea that AJS should build a record-attempt model," recalled George Rowley. "He had been involved in a record attempt at Ar­pajon in 1929, and he told Jack Stevens `You'll get the record easily!' So they started with the big twin, which was really a pair of 498cc chain-driven-ohc R10 singles on a common crankcase."

A. J. (Jack) Stevens himself had overall charge of preparations, but the work was largely the responsibility of Ike Hatch, with Bob Shakespeare as development engineer on the project. As initially built, it was not super­charged and ran at 11.5 to 1 com­pression ratio. Especially ingenious was the massive crankshaft assembly, which had (and indeed, still has) forged steel webs of oval shape. Big-ends are duralumin-caged double-row rollers, the crankpin is 1 7/16-in diameter, and the shaft assembly weighs an impressive 42 lb.

Transmission is through a four-plate clutch to a specially-designed Sturmey­Archer gearbox, and on a top gear of 3.2 to 1 it was estimated that the bike would have a maximum speed of 150 mph.

Bert Denly was Nigel Spring's usual rider, but because AJS were being backed by one oil company and Denly was under contract to a rival concern it was agreed that Oliver Baldwin should do the record runs. In any case, Bald­win was used to handling big twins at high speed, whereas Bert Denly was only a little chap. However, the first outing for the big twin under power was on the main Wolverhampton to Bridgnorth road, with George Rowley in the saddle.

"Without a blower, it was quite manageable," says George. "And it would trickle along at tickover speed. I took it on a 12-mile run. We were run­ning on PMS2 dope – yes, on the open road – and the idea was really just to test the brakes, and so on. Even at that early stage, though, I clocked 130 mph on it; not properly timed of course, but it certainly felt like 130 mph!" 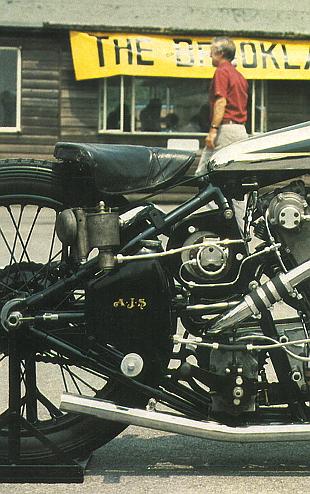 The plot was to try to recapture the World's Fastest title from the Germans and, as Motor Cycling commented in their issue for July 23rd, 1930: "If ap­pearances go for anything, the new AJS has got the record in its petrol tank!". The annual record-attempt festival was due to take place at Ar­pajon, France, in August, but before then Oliver Baldwin had planned to run-in the machine at Brooklands – at somewhere between 90 to 100 mph.

The record at that time stood at 134 mph, and after Baldwin had taken it over a measured quarter-mile at Brooklands at 130 mph, the AJS team's hopes stood high as they set out for Arpajon, with Rowley to look after the mechanical side of things. Alas, came disappointment because the FIM official timekeepers the twin got up to 132 mph but no more. "It was a clear waste of time," comments George, "so we took it straight back to Wolverhampton."

There, it was thought that the extra few mph necessary to take the record would not be too difficult to find – but before anything could be done about it, Ernst Henne put the cat among the pigeons by taking his supercharged 750cc BMW to a startling 151 mph.

Obviously, the AJS twin could never top that in normally-aspirated form, and it would have to be a case of 'If you can't beat 'em, join 'em'. Unluckily, at right about this time the worsening trade depression struck AJS, and the company were forced into liquidation.

"Perhaps, if we had been successful at Arpajon," reflects George, "AJS might never have gone to the wall – but there, we can't rewrite history."

In 1931, the manufacturing rights to AJS motor cycles were acquired by Collier Brothers, the Matchless people from Plumstead, in south-east Lon­don. And because George was the marque's star rider, in addition to being a valuable member of the development department, he too was taken under the Plumstead banner.

The big AJS twin was not forgotten, and now a syndicate headed by well?known motoring journalist Laurie Cade raised a heartening £5,000 for a further attempt to be made at the world record.

"At Wolverhampton the twin had produced 68 to 70 bhp on the brake in unblown state," says George. "The Plumstead people designed new cylin­der heads, incorporated a No. 8 Powerplus blower low down in front of the crankcase, and brought in Percy Brewster to do the development, with the help of Reg Barber. Barber had already won a Brooklands Gold Star on a Matchless, which is why he came into the picture. 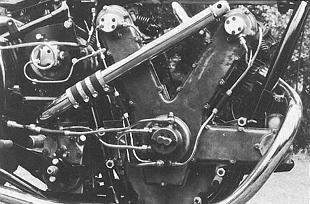 "Well, they dithered around for two years, then they gave Brewster the sack. I never did hear what the final bhp was."

By this time it was May, 1933, and now the great record-breaker Joe Wright was engaged, to give the bike an official run on Southport Sands. Local clubs from Cheshire and Lan­cashire provided enough marshals to line the course at ten-yard intervals, and the FIM were to provide a German timekeeping team.

The morning was bright enough, a crowd estimated at 20,000 turned up to watch the attempt – but there was no sign of the timekeepers. Joe was persuaded to run the AJS up and down the beach a few times to keep the crowd happy and to give the cameramen something to aim at. At long last, a message arrived from the Station­master at Wigan; two Germans had arrived there by train penniless, he reported, and would the ACU please pay their fares? Seemingly the customs officials at Harwich had refused to let their timekeeping apparatus into the country until a whacking amount of duty had been paid, and this cleaned the pair out of cash.

By the time the clocks had been set up it was 4 pm, the weather had deteriorated, and on the waterlogged sand a record run was out of the question. Special permission was sought to try again next day, but after a number of fruitless runs with long in­tervals between, the ACU told the team: "It has gone 4 pm. You can have one last attempt, but that will be the finish." This time the maximum reached was 136 mph, and the attempt was abandoned.

Back at the factory, it was found that the poor performance was due to a valve which had bent during the crowd-amusing runs while awaiting the timekeepers.

September saw the blown twin heading towards the famous Tat Straight in Hungary, with Joe Wright this time assisted by Reg Barber. The twin edged up to 145 mph – respec­table, but still well short of Henne's figure.

That, really, was it, and the following year the AJS was bought from Plumstead for just £85, by Chas Mortimer, senior. In turn Chas sold it to Eric Fernihough in 1935. Some time before then the front-mounted blower was discarded, and the frame was modified very neatly to rehouse the supercharger above the gearbox – a move which improved the handling but did little in the cause of improving the top speed.

After Fernihough's death, the AJS was sold overseas, and in October, 1939 it was acquired by E. & W. H. Jowitt, the AJS agents in Launceston, Tasmania. A year later it passed to Reg Munro, also from Launceston, and during 1940 he made several runs with it in Tasmania, eventually setting a national record of 119.91 mph (which, it is believed, still stands today).

For the next forty years the AJS slumbered undisturbed, still in Reg Munro's possession, but in February, 1981, a small advertisement appeared in British motor cycle papers, inviting bids for the machine in a kind of postal auction. The ad had been inserted by Revell Munro, Reg's son.

Among those who spotted the ad­vertisement and sent off a bid was Gloucestershire enthusiast, Geoff St. John, but he was unlucky and although the AJS did come to a British home, the successful bidder was Gerald Batt, from Guildford. By this time the twin looked rather sorry for itself, and was minus its supercharger; apparently the blower had been transferred to a speed­way midget racing car in Australia, many years before, and it was believed that the car had blown up in a big way.

Gerald Batt decided, on inspecting his purchase that it was not for him and knowing of Geoff St. John's interest in the model, he offered it for sale. This time Geoff was successful.

"Basically, it was in extremely good order internally," he says, "but one of Brewster's original Martlett pistons had seized, and so a replacement had to be made to the same dimensions. The original cams designed to be used with a blower came with the machine, and although we were unable to locate a Powerplus supercharger of the right type, we did find a suitable Shorrock blower, and that is now installed. Lewis and Templeton, of Coventry, restored the tank to its original con­dition, and I made a number of missing parts—such as the contracting-band­type friction damper on the right of the front fork, and the distribution pipework from the blower—myself. One very big difficulty concerns the front tyre, which should be a ribbed 3.00 x 23 in. Nowhere in the world can you get Anything like that, but it so happens that one year Honda made a trials machine which had a 3.00 x 23 in knobbly tyre on the front wheel. That's the tyre which is now on the rim, with the knobbles shaved off, and some grooves added.

"In its final state the model was equipped with twin magnetos, but these had vanished, and so we have converted it back to a single ML magneto."

By no means destined to be a lifeless exhibit in a museum, the blown AJS will be giving demonstration runs from time to time.