After WWII Ultima focused on 125 to 200cc two-stroke lightweights using own-made engines. Models included an attractive 125cc twin port model with outside flywheel and another with a horizontal engine and, in prototype form, a twin cylinder dohc 500cc racer that was never used in anger.

Unibus 1920-22 UK
Against a background of the good, the bad and many many ugly models built by rivals, the Unibus from the Gloucestershire Aircraft Company of Cheltenham was a breath of fresh air. As the first fully enclosed scooter it wouldn’t have looked out of place during the post WWII scooter boom.

It offered full suspension to both wheels and was often powered by Union, Precision or 269cc Villiers two-stroke engines and boasted crank handle starting. With drive via a single plate clutch, two-speed gearbox and shaft final drive it was decades ahead of its time. Unfortunately, thanks to a perceived dodgy reputation, earned by less worthy rivals, and an incredibly high price tag, the Unibus sold in small numbers during an all too short production run. However there are a small number of survivors with either Villiers or Union engines. 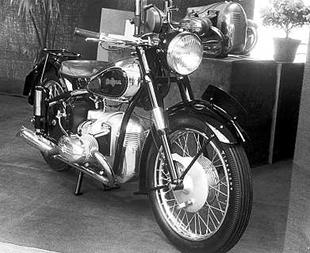 Universal 1928-64 Switzerland
Universal AG production began with 170cc PT powered lightweights marketed under the Helvetia brand after which all models bore the Universal logo. The leading Swiss factory built an expansive range of models from under 250cc singles to 1000cc V-twins using a variety of proprietary engines including Anzani, Ilo, JAP and Rudge Python. Although many models were aimed at the touring rider they built some hot racers, again in the 250cc-1000cc range, for both sidecar and solo riders including Bianchi, Franconi and H. Taveri.

During the mid to late Thirties, Universal designed its own 676cc and 990cc side-valve V-twin engines which were developed with appropriate rolling chassis into the A-680 and A-1000 military models for the Swiss army.

Soon a side-valve model was added to the range, then later 580cc versions and in 1956 a 250cc single with upright engine, by when models had swinging arm rear suspension. Although all models were offered on the civilian market, many shaft drive Universals went to service customers such as the police and military.

Alongside the shaft drive range, Universal offered 150/250cc two-stroke singles and twins with Sachs or Ilo engines during the Fifties. 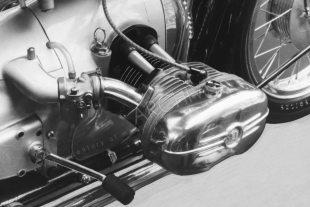 URMW 1958-? Romania
A home market product introduced late in 1957 for the following season, the URMW 150cc scooter was based on the Polish Osa built by WFM (Warszawska Fabrica Motocyklowa).

UT 1922-59 Germany
Although small, the factory of Fildern vor den Toren Stuttgarts played a significant role in the history of German motorcycle manufacture for over three decades. Low level manufacture began with a 246cc lightweight powered by the firm’s own horizontal two-stroke engine. To increase market share and profile, UT enlarged its range using Bekamo, Blackburne and JAP engines. Many motorcycles were built along British lines and included fast ohv models, some of which were prepared for racing.

Like many European makers UT was badly hit by the depression and introduced Bark- and Kuchen-powered lightweights to its range in a successful bid for survival. Motorcycle manufacture ended with the outbreak of WWII and restarted in modest volume for the 1951 season with Ilo powered 123cc and 174cc singles, coded the KTN 125 and KTN 175. Two years later UT began progressively introducing plunger rear suspension, starting with the KTN175. Sales grew, encouraging the launch of the single cylinder two-stroke KTV200.

Further development led to three new swinging arm models – the single cylinder TS200 and TS250 and twin cylinder TS252. More models, including the TS175F and TS175J (Sachs power) joined the range, soon followed by the Sachs powered VS252 twin, VS100 ultra lightweight single and a moped, also with a Sachs engine. Sales slowed during late 1956 and 1957 and motorcycle manufacture ended, though it took two years to clear unsold stock.

Valenti 1978-circa mid-1980s Italy
Another Milan based maker who specialised in lightweights, often with Honda power.

Vallee (Paul Vallee) 1949-54 France
Occasionally fact is stranger than fiction. Paul Vallee’s first two scooters were in rolling chassis and bodywork design near exact copies of the Lambretta A or B and then in 1952 the Lambretta LC, albeit finished in different colour shades.

Despite the use of Ydral 125cc engines one can only speculate why Innocenti didn’t call for the company solicitor as M Vallee of rue Sadi Carnot, Aubervilliers entered no contract with the Italian originator and certainly paid no dues as this would have hit his profit margins. Perhaps Innocenti weren’t bothered so long as no Paul Vallee scooters were sold in Italy or possibly they were flattered to be so openly copied.

Vampire 1950-c1952 France
Clip-on 49cc two-stroke cycle attachment, which mounted under the pedal crank with drive to the rear wheel via a roller, driven by chain from the engine mainshaft. 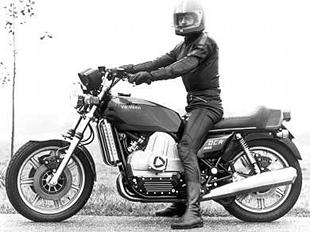 During the Seventies Henk began developing his own concept of the ultimate superbike, which was later hand-built in small numbers in a specially established factory in Germany. The 100bhp machine coded the OCR1000 was powered by a 996cc double rotor rotary (Wankel) engine developed jointly by Van Veen, Audi and NSU, driving through a Porsche designed four-speed gearbox. With Koni suspension and Brembo brakes the Van Veen was not only built to the highest standards but was very expensive.

VAP 1949-c1972 France
Maker from Belin which began production with 98cc two-stroke autocycle type machines and soon added a very neat 48cc cycle clip-on attachment. Weighing just 20lb (9kg) the VAP clip-on mounted to a screw-on extension fitted, to the left side of the cycle’s rear wheel spindle. Drive was via helical pinions from crankshaft to cone clutch to effect a reduction and finally by chain to a large diameter sprocket clipped to the spokes of the cycle’s rear wheel.

VAP, a relatively large volume maker, dropped the 98cc models in favour of an all 50cc range of single and dual seat mopeds. Among the leading machines of the Sixties was the ‘Special Monneret’ named in honour of the renowned French record breaker and Montlhery legend Georges Monneret. It featured a fan cooled Sachs three-speed two-stroke unit mounted in a stylish double cradle frame with racing dual seat, full width drum brakes and fly screen.

Some years before the take over in December 1925 by the American automotive giant General Motors, Vauxhall considered building a motorcycle. The project was rather more ambitious than the usual immediate post-WWI singles and V-twins. The model was penned by consultant engineering designer Major Frank Halford (a friend of Harry Ricardo whose four-valve Triumphs Halford raced with success at Brooklands) and comprised an in line ohv four-cylinder engine driving through a car type three-speed gearbox with shaft final drive to the rear wheel.

Vauxhall tooled up for a pilot batch of six 944cc (originally claimed 930cc) machines but as few as two were built – probably having costed the exercise, Vauxhall deemed it a non-starter. One machine survives in a museum on the IoM and there have been more recent claims that parts of a second exist.

Velamos 1927-30 Czechoslovakia
Two-stroke motorcycles with 250-500cc engines of own manufacture built by Gustav Heinz, who also built the Villiers-powered Sirocco motorcycles. It’s doubtful there are many – if any – surviving Velamos motorcycles. Some of the sturdier model Velamos cycles were employed by the makers of motorised clip-on cyclemotor attachments or suppliers when they wanted to build complete machines.