Triumph (TWN, Orial) 1903-57 Germany
Within a year of starting motorcycle production, Triumph of Coventry opened a satellite factory at Nurnberg, Germany. Although the satellite products were sold as Triumph – especially in Germany – the Nurnberg factory often sold motorcycles in export markets as TWN (Triumph Werke Nurnberg). Confusingly, the brand Orial was sometimes employed and on occasions TWN branded models were marketed in Germany. To avoid confusion in Germany between British and German made Triumphs the Coventry built machines were often known as TEC (Triumph Engineering Co Ltd, unfortunately adding to the confusion some sources state TEC is an acronym for Triumph Engineering, Coventry).

From 1903 the German factory built Triumph motorcycles using predominantly Coventry made parts, which were assembled into complete motorcycles at the Nurnberg factory. This situation continued until 1929, although the German factory became less and less reliant on Coventry made parts. In 1929 the factories split. Once on their own the German factory’s range focused predominantly on two-stroke 198/294cc single cylinder lightweights with in-house engines and a range of Swiss MAG engined models, initially of up to 750cc. Soon Triumph secured the licence to build MAG engines in Germany. 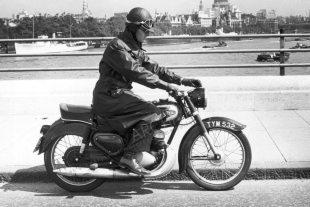 As WWII approached more and more of Triumphs output was focused on the German military effort. Against this background, the Triumph development team headed by Otto Reitz, designed and put into production Triumph’s first split single two-stroke, the 248cc (2x 45 x 78mm) BD250. Modified to military specification the model, coded the four-speed BD250W (Wehrmacht), remained in production throughout WWII serving in dispatch and liaison roles. During the war Triumph developed a 125cc parachute scooter and a tracked personnel carrier in conjunction with NSU using their own (TWN) engine.

After WWII Triumph rapidly returned to peacetime production with the two-stroke 123cc BDG125 and then the split single two-stroke 248cc BDG250, both derived from pre-war models. In 1949 telescopic front forks were adopted and the following year the split single two-stroke 123cc BDG125H was launched, Triumph’s first model with plunger rear suspension. The Nurnberg factory became involved in competition again, especially ISDT and redesigned their 250 with revised split single engine and rear suspension to give the BDG250H, launched in 1951.

Keen to expand its market share, Triumph unveiled the all new 344cc two-stroke Boss aimed at touring motorcyclists and sidecarists. The smaller models were again updated and the Knirps cyclemotor with options of chain or belt drive went onto the market. Planning celebrations for its golden jubilee in 1953 encouraged Triumph to launch the quick, smart 197cc Cornet. The quick fire development policy continued with a concept 500cc model, in effect an enlarged Boss, at the October 1953 Frankfurt Show and developed a 250cc double split single. Neither went into quantity production.

Rather than introduce more models Triumph instead offered a choice of specifications for 1954. But it wasn’t long before the firm entered the scooter market with the 197cc Contessa, its engine borrowed from the successful Cornet. While the scooter was developed Triumph began exporting machines, branded TWN, to the UK. 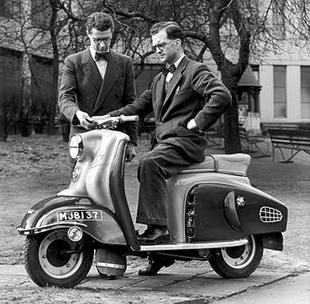 Finally the Contessa was officially unveiled at the 1955 Brussels Show and a year later they too were exported to the UK. Next came the classy Fips moped with 47cc two-stoke Sachs engine and the short-lived 125cc Tessy scooter.

Unfortunately, German home market motorcycle sales were slipping and production was far out-stripping demand – despite a tripartite agreement with rivals Adler and Hercules to peg production Triumph were in trouble. Large batches of machine were unloaded at knock down prices in some export markets including the UK.

Motorcycle manufacture ended at the Triumph Nurnberg factory mid-1957 as the firm cut back to limit manufacture to office furniture and typewriters.

A year later the electrical conglomerate Grundig took over Triumph/TWN and Adler and that appeared the end, except Hercules acquired manufacturing rights for the Fips moped and Contessa scooter in which they installed a Sachs engine in place of the Triumph split single unit.

Trotwood c1937-c1942 USA
Built by Trotwood Trailers Inc of Trotwood, Ohio the Trotwood scooter was bizarre in the extreme. In effect it was a small engine carried on the front fork driving the front wheel. The entire front of the scooter including the engine was covered in a curved metal sheet, which the makers imaginatively described as a ‘streamlined trunk.’

With its rider sitting on top of a tin luggage compartment, his or her feet protected by further curved metal sheets and in place of a single rear wheel a pair of wheels, both of which were braked, the Trotwood was without doubt different. 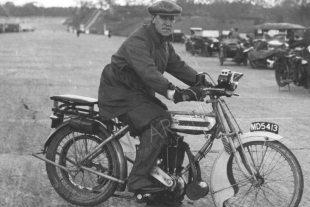 Motors Ltd was based for many years at Foxlake Works, Byfleet but at various times traded from Liphook and Birmingham. For much of the production period the range focused around JAP power using side-valve and ohv single and V-twin units including the famous ohv 90 bore JAP V-twin unit used pre-WWI. In addition, Trump built a few lightweights postWWI with Peco and other proprietary two-stroke engines. From the outset McNab and Maitland excelled at speed events and by 1909 were accomplished Brooklands regulars. Maitland left the business in 1911.

After active Navy service during WWI the burly six-footer Frank A McNab returned to civilian life a Lieut. Commander and restarted Trump motorcycle production, aided by Colonel RN (Bob) Stewart – who also gained fame at Brooklands – and his wife who later became renowned Morgan exponent Gwenda. Although Trump included economy lightweights in its range, McNab and the Stewarts were more interested in fast single cylinder and V-twin models, which they all (including Gwenda) raced to success in many speed events, including at Brooklands.

Among the famous customers was HRH The Duke of York, later King George VI, who sponsored his chauffeur SE Wood on a 988 V-twin Trump Anzani as well as a Douglas. Trump production ended c1923. However, some sources state the Trump brand changed ownership with production transferred to and continuing in Birmingham until 1926. 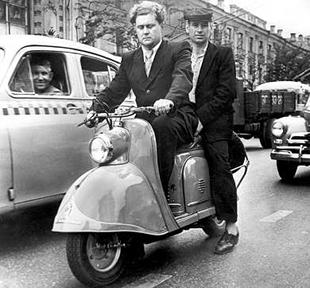 The state sponsored Tula T200 (200) scooter was launched in August 1957, near the same time as the similarly supported Vjatka scooter. Clearly, small wheels were suddenly in with Russian state official thinking. Although claimed in the Russian press as of all new design it was heavily based on a German Hans Glas GMBH built Goggo-Isaria 197cc Motoroller (scooter).

The T200 with bulbous bodywork powered by a 55mph 197cc two-stroke engine with electric starter was built in some quantity until at least 1973 when replaced by the Tula Tourist with the same power unit as the T200 but with restyled bodywork, not unlike a late Fifties Lambretta. Although marketed for the home market a number of Tula Tourists were exported in the middle/late Seventies to the European market.

Typhoon 1955-c1963 Holland
Became for a few years a respected maker of 50cc mopeds and mofas, predominantly for the home markets using proprietary engines from a range of makers.