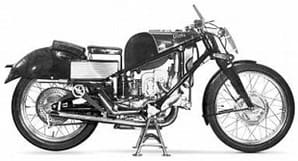 Romeo 1969-75 Italy
Maker of 50cc Minarelli-engined ultralightweights. Odd examples of the motorcycle and moped like machines find their way out of Italy.

Rondine (Dates as detailed) Italy
Four concerns are briefly mentioned here as one led to the post WWII world championship winning Gilera fours. Each concern appears to have been independent of influence of other makers of same name. Some have intimated links between the Rondine marques, all included here to distance them from each other.

Produced by the Campagnia Nazionale Aeronautica (Rome) with financial backing from Count Bonmartini the Rondine developed by OPRA designers Gianini and Remor was an ohc water-cooled transverse four. Raced by Amilcare Rosetti and Piero Taruffi, the Rondine was bought by Gilera who further developed the concept, often racing it under the Rondine logo.

They continued briefly in this vein after WWII, further developing the design once they’d begun to recover from the war leading to the famous Gilera fours raced so well by Masetti, Duke, Liberati, McIntyre et al. It’s claimed MV took a long look at the Rondine design before developing their own transverse fours employing selected engineers who’d experience of Rondine/Gilera models.

Roussey and PP Roussey 1931-56 France
Brothers Paul and Pierre Roussey established their motorcycle business at Meudon. Assembly began with a range of 100 to 500cc motorcycles with proprietary engines. After WWII the brothers restarted production with two-stroke lightweight motorcycles and a neat 48cc cycle clip-on with the engine mounted outboard of the cycle’s left rear fork leg. As well as loose clip-ons the Roussey brothers built complete cyclemotor machines including stylish tandems with dropped rear frame.

In 1952 Paul and Pierre unveiled a stylish sleek scooter, looking some claim like an imaginary period two-wheeled Citroen. Offered with either 125 or 175cc water-cooled engines it was updated in both mechanical and styling aspects in 1953 and 1955. The brothers often used proprietary engines including Staub, Chaise and Aubier-Dunne. 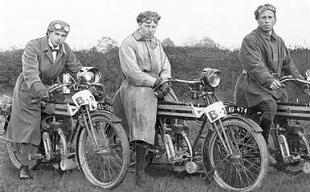 And while the Rover car brand now seems gone forever – unless it’s to rise in China or elsewhere – the name Rover continues in the Land Rover built vehicles launched for 1948 and continuing in rather more sophisticated forms today.

Under Starley’s guidance, the fledgling Rover cycle concern was established at The Meteor Works, West Orchard, Coventry. After Mr Starley’s death in 1901, Harry Smith took over as managing director, and following board meetings the company began to develop two and three-wheel motorised prototypes including clip-on engines on cycles and a tiller steering three-wheeled forecar.

Although the Rover was an outstanding machine for its day, the company board was less than happy building top class motorcycles, which they were forced to market alongside those from rival makers they considered less than worthy. 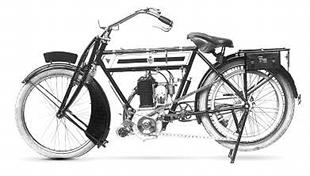 After an impressive – for the period – production run of 1250 machines, Rover ended motorcycle manufacture in 1905. By 1908 the company was under the control of JK Starley’s son – confusingly also named JK Starley – and the company modestly returned to motorcycle production with Motosacoche clip-ons fitted to their sturdy cycles.

During 1910 mutterings emanated from the Rover works implying updated 500cc motorcycle development was under way. However, this was shelved in favour of an all new 499cc side-valve model designed by John Greenwood, which took just six weeks from drawing board to its launch at the 1910 Olympia Show. Although boasting no staggering major cutting edge designs, it was a quality made 500 with a distinctive oil pump blister on the side of the tank. With updates this engine remained in production until 1923.

Initially pedal start direct drive models were on offer but soon options of hub gears/clutches (Armstrong) became available, while some owners opted for proprietary clutched or variable gear pulleys. Rover motorcycles performed well at hill climbs, trials and also gained a number of places at Brooklands. Their TT results were less impressive, although they gained the manufacturer’s award in 1913. With justification, Rover included a direct drive run-and-jump TT model in their pre-WWI range.

Over 4500 motorcycles had been built by the outbreak of WWI during which Rover supplied an initial order of 350 models to Russian allies, with a further 3103 machines supplied to the Allied Forces before the war’s end. Despite the war, British makers were allowed to build motorcycles for the civilian market – in most cases – until 1916 and Rover modernised their range for the 1915 season. Gone was the pedalling gear and in came three speed counter shaft gearboxes with kick-starter made by another major motorcycle maker for Rover. A 5-6hp V-twin with JAP side-valve engine was also unveiled, replacing an earlier briefly built MAG engined model.

Returning to peacetime, the Coventry maker continued with more of the same – 499cc singles or JAP engined V-twins with counter shaft gearboxes. Even the direct drive TT model was still on offer. To an extent it was an old fashioned range, but the undoubted build quality shone through.

Although Rover had steadily adopted all chain drive for some models since the war, belt drive wasn’t finally dropped for all versions until 1922. But for the rest it seemed a case of yet more of the same, although there were rumours of top secret, cutting edge development work at Coventry.

Launched at the 1922 Olympia Show for the 1923 season was an all new unit construction three-speed ohv 250cc (63 x 80mm) single with ML Maglita for ignition and electric lights. Unfortunately, it wasn’t quite ready and early production models suffered problems with engine expansion and too flimsy front forks. Quick modifications made it a much better machine but perhaps its reputation was already harmed. That reputation was further dented by a less-than-average performance in the 1923 ACU Six Days Trail, with two retirements and only Rover stalwart Dudley Noble securing a Gold. 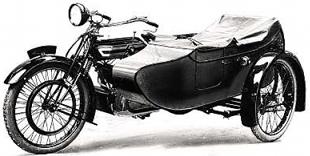 For the 1924 season all models except the unit 250 were dropped, the only new addition a 350cc unit model. The 350cc model was a similar machine to the 250 but with an enlarged bore (74 x 80mm). The 350 was good for 60mph with the standard iron piston and more with optional higher compression silicone alloy piston. The last Rover motorcycles were built in 1925 and any remaining stocks were cleared by the factory during 1926 – how long the last few hung around in dealer’s shops is unclear. Destined to become quality car makers, Rover never built motorcycles again.

A clever engineer and able racing car driver, M Rovin bought the San-Sou-Pap (without any valves) motorcycle factory at Colombes in 1929. Rovin built tiny 260cc single cylinder plus 425cc and later 462cc flat-twin engined cars. In the cyclecar style many were neat, nippy, sporting little jobs. His postWWII model were popular in Paris during the 1950s.