Piatti 1952-58 Belgium and UK
A truly European venture, designed by a London-based Italian Vicenzo Piatti who also boasted a Milan home, they were initially put into production by the famed Brussels coachbuilders Les Anciens Etablissements D’leteren and then later by Cyclemaster of Byfleet, Surrey. Prototypes appeared at the 1952 Brussels Salon and although designed in both 98 and 125cc form, the Belgian firm began production in 1954 of predominately the larger model. Planning an initial run of 5000, only 805 slow selling quirky scooters were built.

As many as 15,000 were built in Byfleet where Piatti production ran 1956-57. Apart from its tiny wheels, ultra short wheelbase, dubious near upright steering head angle and interesting engine servicing access – tip the scooter on its side sir! – Vicenzo’s baby had many good points. Multiposition dual seat and handlebar height adjustment, punchy economical engine, excellent weather protection with detachable windscreen and canvas panel to protect your hands on a winter’s day and even adjustable rear shock absorbers. Unfortunately the plot could have done with much more development. 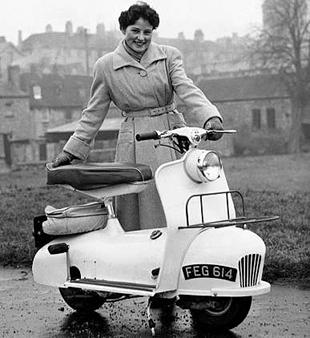 In the non-PC times of the Fifties’ marketing drive was aimed at the housewife. Often described as a cigar tube on wheels, the 45-50mph scooter boasting 7in wheels with the wheelbase of a child’s scooter was for many a case of no thanks. Cyclemaster ironed some faults on for the stillborn MkII version and closed down in 1958.

Aiming at quality rather than keen price, Pierce began marketing their distinctive motorcycle in 1909. The main frame built from three 3.5in (90mm) diameter tubes which doubled as oil/fuel tanks. Front suspension was by leading link fork and the FN-like in-line four-cylinder engine direct drive was by shaft and rear wheel hub-sited bevel box. In 1910, a direct belt drive single joined the range and the four gained a multiplate clutch and two-speed gear.

The fast four was smooth, exclusive, and expensive. Only for the wealthy, sales were modest leading the company to throw the towel in 1913 and stick to cars until closure in 1938. A moderate number of Pierce-Arrows, so named by the shape of the tank logo, survive including here in the UK and Europe. The four remains smooth, exclusive, and expensive.

Pirol (Miranda and Schweppe) 1949-54 Germany
Range of unconventional scooters with their headlights housed within the front mudguard, built by Pirol-Fahrzeugfabrik GmbH (formally Firma Schweppe) of Dortmund. A large crucifix mounted on the front legshield carried the marque logo.

Originally marketed as the Schweppe, then, when Pirol-Fahrzeugfabrik GmbH was established, as the Miranda, before becoming the Pirol. All two-strokes, the best known models were the Ilo-engined Pirol 145, Kuchen-powered Pirol 200 and Miranda 200 with a Sachs unit. Considered by scooter stylists as an ugly duckling, they are becoming sought after by collectors and at least spares are still available for Ilo and Sachs engines. 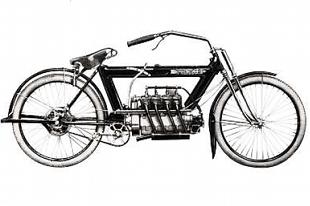 PMZ 1931-1939 Russia
The Podolsky Motorcycle Works of Podolsky began with cyclemotor clip-ons, progressed to BMW-like flat-twins and then to Harley-Davidson style 1000cc V-twins. The Russian military used adapted civilian models for dispatch duties, and sidecars for gunship and reconnaissance roles. Their favourite was the 746cc side-valve V-twin that was replaced by the M72 (BMW M71 copy).

Pointer 1946-62 Japan
One-time big player of the Japanese motorcycle industry, who began with lightweight commuter-type machines, progressing to a range of sound up-to-250cc models, predominantly with their own two-stroke engines. Now, they are sought after by collectors and enthusiasts.

Polenghi 1950-55 Italy
Maker of mopeds and mofas type machines aimed at local commuters and youngsters. Occasionally turn up in northern Europe, thanks to Italian specialists.

Pony-Monark 1951-c1962 Japan
Like Pointer, another forgotten Japanese marque that built lightweights of up to 250cc. Used their own ohv and two-stroke engines. They were built in some quantity so examples must surface. 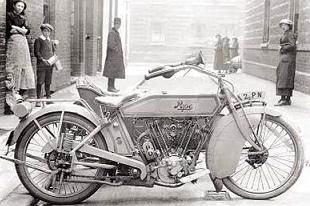 Marketed through cycle agents in the USA, the Pope was confusingly sold under many other brands including Tribune, Cresent, Imperial and Rambler – a name also used by Ashford, Kent-based Norman for lightweights sold in Australia after WWII. Even more confusingly, two other very small volume American marques used the Pope brand.

Seldom offered for sale in Europe and very expensive when sold at auction in the USA.

Powell c1939-54 and 1967-72 USA
Los Angeles based brothers Channing and Hayward Powell had been in business since 1927. Just before WWII they unveiled their take on the American style hot-rod scooter. The single speed Streamliner 40 and later 41J models were powered by 2.3hp four-stroke Lauson stationary engines, driving through basic single speed transmission systems with automatic centrifugal clutches. 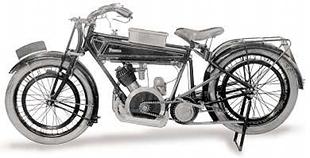 In 1940 the A-V-8 or Aviate was launched. Powered by their own 5hp engine, built using selected Ford V8 parts installed in Powell's own castings, many of iron. The half scooter, half motorcycle machine was typically American in style with ideas culled from Indian and Harley-Davidson. Specification included variable speed transmission but with the option of manual four-speed with overdrive on fifth override. Options included either kick or electric start. Others tried to cash in on the Powell Aviate concept including Frank Cooper with the Cooper Aviate for which he was hopeful of military contracts, Clark Engineering, who sold them as the Clark Victory Clipper in the middle WWII years and the Clark Cyclone briefly after WWII, and L Ronney and Sons who sold theirs as the Ronard Jeepette.

For much of the war the Powell brothers' business was occupied making large item ammunition, including shells. After the war they returned to scooter production with the 6hp Wisconsin AKN powered Lynx and in 1947 unveiled the C-47 with their own engine. A strange looking tough machine, from which came the 7hp P-48 and later P-49. In 1949 Powell unveiled the P-81, which in concept owed much to the A-V-8 being half scooter, half motorcycle.

With the Korean War under way, Powell gained many military contracts leading them to cease scooter manufacture. However, in 1967 they returned using off the shelf Briggs & Stratton power for the 3½hp Model M and 5hp Model L Challenger scooters plus 7hp Model J and JL Phantom mini-motorcycles. Options included Tecumseh power. For collectors of American scooters any of the Powell brothers’ models are rare, sought after and often expensive finds for the serious enthusiast. 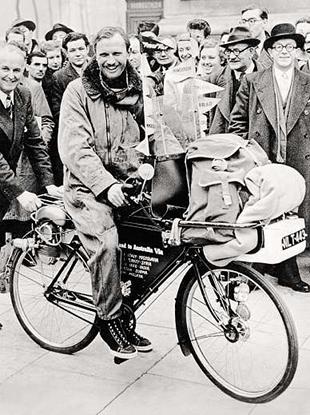 Power Pak 1951-56 UK
Built in large numbers by Sinclair-Goddard and Co Ltd, the 49cc two-stroke clip-on mounted over the rear wheel of a bicycle, with drive by friction roller. Offered in two forms, Standard or Synchromatic Drive, later examples prefixed ‘New.’ A lifting handle enabled the distinctive unit, with its upside-down engine, to be lifted free of the wheel, enabling the cycle to be pushed or pedalled conventionally. Plenty of examples survive, though as fuel tanks, mountings and lifting handles are scarce, only consider complete examples with sound friction drive roller.

P&P 1921-26 UK
Designed by Messrs Packman and Erling Poppe son of the owner of White and Poppe engine makers, Erling was later responsible for much of the design of the Sunbeam S7. P&P motorcycles of Coventry were for the most part made by Montgomery.

Although they offered a range of 248cc to 996cc motorcycles, many with sporting pretensions, they were perhaps best known for their Silent Three. The well silenced machine with Barr and Stroud sleeve valve engine was among the quietest on the market, while ample enclosures helped keep the rider cleaner.

In 1925 the Montgomery factory was ravaged by fire, ending P&P production too. With much enterprise P&P manufacture restarted later in the year with models displayed at the Olympia, London Show, but sales were slow, in part due to the hard economic times. Manufacture of these attractive sporting motorcycles ended for good.

A modest number survive including some Barr and Stroud Silent Threes and a few rorty 350cc ohv Blackburneengined models.

Continuing manufacture, the machine was at first still marketed as the BD but later renamed the Praga. A 350cc version appeared, which from 1932 was offered with a pressed steel chassis and shaft final drive too.

Praga motorcycle manufacture ended in 1935 while car production continued until 1947.

Precision 1910 (1912)-19 UK
Born in Dorset, Frank Baker was apprenticed to cycle maker Lovelace of Hensbridge in the 1890s, then the Nimrod Cycle Works of Bristol. A career as a journalist and editor of the Cycle Referee followed, then an extended trip to the USA to study production engineering. Back in the UK, Frank joined the Eadie Manufacturing Company and was involved in work on early Royal Enfields before becoming manager of the Premier Cycle Company.

With a workforce of 20, Baker achieved his ambition to run his own company, FE Baker Ltd, who manufactured cycle fittings marketed under the Precision Brand.

In June 1910 Frank Baker unveiled Precision’s first engine, a 499cc side-valve with square style barrel finning designed by his chief draughtsmen SJH Wilkes. Baker’s next ambition was to become the world’s leading motorcycle engine maker, one assumes by intending to knock JAP into touch en route! By autumn 1911 Baker offered a range of 293-599cc singles and a 760cc V-twin with legitimate claims that many makers fitted his engines. 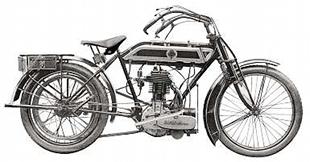 The engines proved sound and Precision power soon became well known in the motorcycle and later cyclecar world. From the outset Baker wisely vowed not to build complete motorcycles that would be in direct competition with those of his customers. But he then broke the rules, albeit only for export to Australia, South Africa and New Zealand and possibly other distant countries. Sound, typical motorcycles of the period, Frank Baker’s Precision motorcycles were almost certainly built by another works on his behalf, probably nearby Sun Cycles and Fittings.

In mid-1919, Precision unveiled details of their all-new two-stroke engine unit. During 1913 FE Baker Ltd moved to larger premises at Kings Norton, Birmingham, then through WWI was successfully given over to munitions work, their workforce growing to a claimed 800. Possibly with development work during the war years, Precision unveiled in 1919 an all new 350cc two-stroke engine in unit with a two-speed gear system which relied on selective drum clutches engaging two different primary drive ratios. Next came a complete advanced motorcycle with rear suspension, external expanding brakes to both wheels and linked rods instead of control cables. Few of the new machines were made before a huge cash injection from locomotive, aircraft and ship engineers/makers William Beardmore and Co Ltd. From then on the motorcycles were sold under the brand Beardmore Precision. Although few if any pre-WWI Precisions survive in the UK, they are found in the countries to which they were exported in the period.