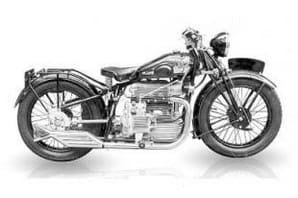 Morbidelli (MBA) 1969 – Italy
Although captivated by road racing as a teenager during the Fifties, Giancarlo Morbidelli started a woodwork manufacturing and machinery business in his home town of Pesaro, only a stone’s throw from the Benelli works. As his business thrived, Morbidelli entered the road race scene as a sponsor, claiming the publicity would enhance his woodworking business.

Luciano Mele won the 1968 Italian Junior title on a Benelli 60 and a Motobi entered by Morbidelli, who the following year built his first racer, a water cooled, disc valve six speed two-stroke single, with much engineering help from Franco Ringhini. Soon came a 125cc racer which Gilberto Parlotti took to second place in Morbidelli’s first assault on the 125cc GP scene. Parlotti – a motorcycle dealer from Trieste – was to enjoy more places and four wins before losing his life at the Verandah in the 1972 IoM TT races.

Devastated by Parlotti’s death, Morbidelli, who had been testing a 350cc four, almost withdrew from racing, but bounced back a couple of years later, knocking established factories sideways by winning a string of constructors’ titles as well as 125cc championships for Paolo Pileri, Pierpaolo Bianchi (three) and Eugenio Lazzarini as well as the 1977 250cc title for Mario Lega. 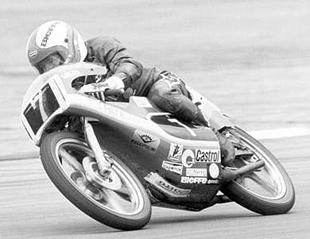 Not only did the works teams excel but Morbidelli – who later became MBA (Morbidelli-Benelli-Armi) in a business merger – built super, over the counter replicas of their works models, which, although down on power by 5bhp compared to the works racers, were national winners straight from the crate. And, with tuning, occupied many GP places for more than a decade. In the Eighties, MBA continued with the lightweight works race programme but again built 350/500cc prototypes.

MBA 125cc twin cylinder racer production continued until the late Eighties, when the class was restricted to singles by the FIM. The name Morbidelli reappeared in 1994 on an expensive, complicated V-eight touring roadster with styling by Pininfarina. Further Morbidelli production is on hold but odd models still appear on the company’s stand at woodworking shows. Serious production levels ensure a good survival rate of 125cc MBAs which attract much enthusiasm.

Morris 1913-22 UK
Nothing to do with William Morris of car fame who briefly made motorcycles (1902-05) but a firm from Knowle, Birmingham who built complete machines using their own 247cc two-stroke engine, which were also sold as proprietary units to others including Hobart.

Morris 1902-05 UK
Oxford cycle and motor agent William Morris (later Lord Nuffield) built a small number of MMC and De Dion powered motorcycles 1902-05. In 1913 he began production of Morris cars in 1913. In 1952 Morris merged with Austin to form BMC (British Motor Corporation) which was swallowed up by Leyland Motors to form British Leyland in 1968.

Moskva 1941-c1977 Russia
The Iskra Zaved Plant, Moscow, began production with a 750cc BMW R71-like side-valve horizontal twin designated the M-72 for military use. At lengthy intervals, the model was improved and re-coded. Its final form the K-750M was replaced by the Dneiper MT-12 in 1977. After WWII, Moskva made 123cc and later also 173cc two-stroke singles based on DKW design, which eventually became the Voskhod.

Also built shaft drive 346cc ohv single and 592cc ohv twins in the style of BMW – like the military models these also became the Dneiper. Rugged motorcycles with little or no spares back-up. But the military models especially are a ‘must have’ for some collectors. 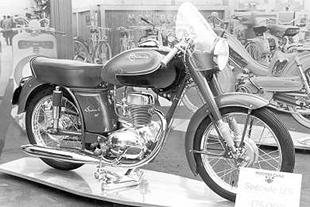 Motobecane 1923-1982 France
Few motorcycle founders started production with the expressed aim alone of making lots of money. Most have ideals of the perfect machine, sales of which they hope will take off, but Motobecane founders Charles Benoit and Abel Bardin believed their way to a fortune as motorcycle manufacturers was to keep it simple, mass produce, maintain a reputation for reliability and sell in volume, needing only a small profit margin on each unit.

Starting the business in a redundant Saint Quentin electric motor factory, the founders were so successful that by 1928 they’d sold over 150,000 of their simple base model 175cc two-stroke belt driver. Cheap and basic the launch machine may have been, but it earned an enviable reputation for rugged reliability, leading other makers to make use of Motobecane’s spare production facility in the Twenties, on the principle of what was built at Saint Quentin was sure to be sound. Motobecane benefited as the production lines were kept working at full capacity and each machine built, regardless for whom, represented a few more Francs profit in the firm’s coffers. Development, expansion and takeover was in the air.

In 1928 Motobecane established an engine building plant, Polymecanique, initially making 100cc two-stroke clip-on units for mounting on Motobecane cycles. Within a year the off-shoot plant was in full production. Then in 1930 the Saint Quentin firm took over rivals Motoconfort (est 1925). The name was used on selected Motobecane products before and after WWII, including mopeds and scooters as well as motorcycles.

By the early Thirties, Motobecane had launched a range of up to 750cc machines ranging from humble two-stroke workhorses to shaft drive ohc in-line four tourers. Motobecane continued their policy of offering easily maintained reliable fuss free models which represented excellent value for money. The new larger models became top sellers, but manufacture of utility lightweights continued, marketed with their now familiar stack it high and sell it cheap policy. Each sale was regarded as important and a means to keep the production lines at full capacity, while hitting rivals in the pocket as each Motobecane sale was another their competitors missed.

Charles Benoit designed and launched the Type Z range in 1937, first with a 100cc four-stroke engine, upped to 125cc and later 175cc. Production of this family of models continued until 1963. 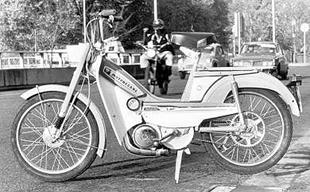 During WWII, Motobecane supplied a three-speed 99.8cc single cylinder two-stroke motorcycle to the French military built by their Motoconfort division based at the Pantin, Seine engine building plant. After the war they launched the Pony 50 49-60cc mopeds series based on a pre-WWII prototype, the Pony 60. With hindsight, we can see this model range as the forerunner of the famous Mobylette which started to roll off the Motobecane assembly lines on 30 November 1949.

Probably few models have made more impact than the Mobylette moped. Adhering to the principles of founders Benoit and Bardin, the Mobylette was simple to ride with most (but not all) having Mobymatic automatic gearing, simple to maintain and of sturdy build. Over the years, models from economy rigid mopeds with cycle type front brake, to luxurious fully sprung examples with dual seat and two-tone finish and even fold-up models were offered. Specific models were marketed under the Motoconfort label and other manufacturers, including Raleigh Industries in the UK, assembled Mobylette mopeds for sale under their own brand.

Spotting a potential market for the new scooter craze sweeping Europe, Geo Ham designed the first Motobecane (SCC)/Motoconfort (STC) scooter which was unveiled at the Salon de Paris in 1951. Powered by a three-speed 125cc four-stroke engine the new models, affectionately known as Mobyscoots, were exquisite devices with sporting aluminium rear bodywork with integral fuel tank, torquey engine, full suspension and enclosed chain drive. Unfortunately too expensive to sell in the numbers expected or demanded by Motobecane, it was replaced by the SB (Motobecane) and SV (Motoconfort) scooters in 1954, in effect French versions of the naked Lambretta design. Dressed versions SBH/SVH appeared in 1956 and the de-luxe models a year later. Although successful, Motobecane scooters never became world beating top sellers like the Mobylette range.

While the moped market remained strong, Motobecane detected, during the early Sixties, a rising French interest in motorcycles once again, leading to the launch of the 50cc five speed D52 in 1965 followed by a 75cc model, the C52 in 1968. In 1972 came an attractive 125cc electronic ignition two-stroke twin, with a 350cc two-stroke triple hot on its heels.

The 125cc twin concept was developed into a successful racer which was first ridden internationally by Thierry Espie who scored Motobecane’s first World Championship points at Imatra, Finland in 1977 and a fourth in the 1979 rider’s table. Fellow Frenchman Guy Bertin took over during the 1979 season scoring wins at Brno, Czechoslovakia and Le Mans. In 1980, Bertin gave Motobecane their best championship hope with wins in Yugoslavia, Czechoslovakia and Germany to finish runner-up to Pierpaolo Bianchi’s MBA.

Moped manufacture continued into the Eighties as Motobecane became first nationalised and were then bought by Yamaha, who wanted the factory premises for a European manufacturing/assembly base. The plant continues to thrive today, especially with twist and go scooters and mopeds, some of which are sold as MBKs. Enthusiasm abounds for many Motobecane models and many spares are available for the mopeds. 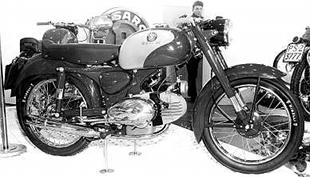 Motobi 1950-76 Italy
Giuseppe Benelli parted company from his brothers and the Benelli factory in late 1949 to found his own marque, Moto B Pesaro. A few months later at the April 1950 Milan Spring Fair, Giuseppe unveiled his first motorcycle, a lightweight which looked similar to the German Imme, with horizontal single cylinder two-stroke engine. Strong sales led to the development of further models, all with horizontal egg-shaped engines. Then, in 1952, came first a 200cc then 250cc twin cylinder two-stroke models with rotary valve induction.

In 1955, the company adopted the marque name Motobi and in the mid-Fifties Motobi developed four stroke singles of 123cc and 172cc still with distinctive horizontal egg-shaped engines. Both were developed/converted into racers, the 172cc version dominating the Italian Junior Championships with 10 titles (1959-72). The 172cc racer was overbored to give a 203cc version for the 250cc class.

Giuseppe died in 1957, leaving sons Marco and Luigi to take control of Motobi, which was reunited with the family company Benelli in 1963. While Motobi motorcycle sales were solid, their attempts to enter the scooter market were less so. After a series of prototypes, production began in 1957 with the 125cc and 150cc two-stroke Ardizio, 125cc four-stroke Imperiale and top of the range 175cc four-stroke Catria, styled on Lambretta LD lines with its engine robbed from the 175cc motorcycle. In 1959, the Pesaro factory launched the 75cc four-stroke Pic-nic, a strange moped/scooter cross which was enlarged to 125cc in 1963. 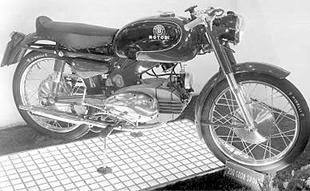 Through much of the Sixties, Motobi maintained their identity offering up to 250cc singles with their egg-shaped engines but gradually the name was used more and more on Benelli models for selected markets. Most Motobi models attract quite a following across Europe but beware some of the racers on offer. While many are pukka factory jobs, some are recent home brewed creations built to cash in on the lucrative interest in attractive Italian racing hardware.

Motobic 1949-65 Spain
Production began with an 80cc two-stroke lightweight, then mopeds with the range further enlarged to include 60-125cc motorcycles. Sales dwindled in the early Sixties and the range was slimmed to include a 75cc motorcycle and 75/95cc scooters. Poor spares availability, but examples surface at European autojumbles occasionally.