King 1901-07 UK
Although I only know of one survivor, the King marque has to be mentioned. Their range of motorcycles and three-wheelers were built in Cambridge by the cycle and later motorcycle dealer King, who later became King and Harper and traded until 1967.

King built both motorcycles and three wheelers with De Dion Bouton power. Also used many other proprietary engines for their solo models.

Kingsbury 1919-23 UK
Basic scooters which looked much like a child’s scooter with an engine attached. Many were devoid of a seat, so control of the 225cc two-stroke powered device must have been rather more hairy than the attractive period adverts of dashing young things popping down to the coast on their Kingsbury Scooters implied. Also built lightweight motorcycles and small cars too. 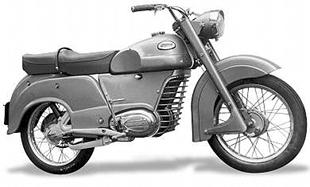 Koehler-Escoffier 1912-57 France
Innovative marque during its early years with many models designed by factory proprietor Roger Guignet. Some earlier models were of ohc design including a 996cc V-twin which is believed the first of its type to enter quantity production. Other models used ‘bought in’ Chaise and MAG engines.

At the end of the vintage period, the Monet-Goyon factory from Macon took over the Koehler-Escoffier works and the machines became more and more like Monet-Goyons. After WWII, the two marques were near identical and were powered by a range of Villiers two-stroke engines – many built under licence in France plus odd four-stroke models often with up to 350cc side-valve units. From 1954, the JA Gregoire rear suspension was used on most models as well as the comparable Monet-Goyon models.

For a time, Koehler-Escoffier ran their own race shop, their leading rider being the famed record breaker George Monneret who must have lapped Montlhéry more than any other rider. Vintage ohc models are highly prized and accordingly expensive.

Komar c1958-c1968 Poland
Communist government funded maker of utility mopeds. Functional but ordinary and of interest to the moped collector who may occasionally find odd examples at Continental autojumbles.

Konig 1969-77 Germany
An odd choice to include in our buyers guide but a modest number of Konig solos and sidecar outfits were raced by privateers and supported teams leading to isolated machines surfacing today. Famed for their multi-cylinder two-stroke powerboat engines under the guidance of MD Dieter Konig, the company first built a solo road racer for Rolf Braun. Based on a water cooled 500cc flat four cylinder two-stroke the concept sired a succession of solos and sidecar machines.

Best results included runner-up spot for Kiwi Kim Newcombe in the 1973 500cc World Championships with a win in Yugoslavia and two sidecar world titles for Rolf Steinhausen/Josef Huber aboard their Dieter Busch tuned Busch-Konig in 1975/76. Briefly, the Konig had successfully challenged BMW supremacy in the sidecar class before losing out to new boys on the block Yamaha. After Newcombe’s death, Christian Leon – among others – took up the challenge briefly, while many charioteers, including the British Boret brothers, used Konig power before the Yamaha swept them aside.

Kreidler 1951-82 Germany
Named by many ‘King of the Fifties,’ Kreidler were just that once they’d introduced their famous Florett. Kreidler powered Angel Nieto, Jan De Vries, Stefan Dorflinger, Eugenio Lazzarini and Henk Van Kessel to World Championships with 50cc racers which by the end of their reign were approaching 130mph top speed at 17000rpm. Add to this World Speed Records, trials success and many hundreds of wins for clubmen road racers. 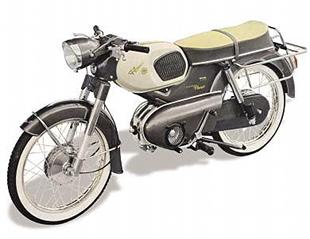 Impressive. But the real winner was the man in the street, for whom the Kreidler Florett was a period phenomenon. Unrestricted early models would cruise two-up at 45mph which had moved onto to 55mph by the late-Seventies. Kreidler handed out many thousands of natty gold tie pins to owners who’d clocked over 100,000km aboard their Kreidler.

So what made the Kreidler so special in an era of disposable fifties? After all, the rolling chassis was typically German, a tad overweight and at times their welding was average. The answer is the engine/gearbox unit. Superbly manufactured with chrome bore, substantial, well balanced bottom end, top quality bearings and a robust gearbox, they have the ability to withstand flat out riding year after year.

Kreidler Fahrzeugbau occupied a large factory in Kornwestheim, near Stuttgart producing part finished metals to high standards of accuracy for the German manufacturing industry, along with forgings, tube products and wire. Notably barbed wire, a barb of which is cleverly represented in their back to back ‘K’ trademark. In 1951, Kreidler decided to branch out into motorcycle manufacture as a sideline.

The original launch model K50 was, like the majority of models that followed, of 50cc. Rather than build larger machines, for the best part of 30 years Kreidler operated a policy of small is best and simply made the best possible. The 49cc K50 moped was followed by the de-luxe version K51, then in 1955 by the R50 scooterette. But it was the launch of the Florett in 1957 which shaped the company’s destiny for the next quarter of a century.

Viewed as a moped, the Florett was unbelievable; considered as a small motorcycle it was superb. The initial flat 49cc fan cooled engine with 8.5:1 compression, hard chrome bore and Marle piston was housed in a pressed steel frame. It sported an almost two gallon tank, swinging arm suspension and alloy full width hubs. Soon offered in restricted Mo-kick form, as well as unrestricted mopeds, the Florett filled a very big niche in the German market. It was cheap and simple enough for Mr Everyman, but reliable and fast enough at 75kph (48mph) to blow all other mopeds into the weeds.

Soon, private owners began using Kreidlers in competition, first off-road and then road race. Not wishing to be left behind, Kreidler signed established cross country rider Hans Georg Anscheidt to the research and development department. Although Anscheidt was to make his name as a world championship road racer with Suzuki, his first major factory success was winning a gold medal in the 1960 ISDT. Further off-road success followed as did the birth of factory road racers – initially converted Florett roadsters – and record breaking machinery.

As the Sixties drew to a close, the fan-cooled Florett was joined by a new generation of fin-cooled models in 1967. Developing 5.3hp the model was good for over 50mph, two-up! A simple factory tuning kit upped hp to 9.5 while ‘works’ factory models were delivering over 14hp at the crankshaft. And all this from a moped engine. Although factory racers had enjoyed much success, world championships eluded them. But all this changed as Dutch importers Van Veen began heading the racing programme from 1970.

By 1971, top Kreidler roadsters were developing 6.25hp, enough for an easy 90kph (56mph) while the racers were pumping out 17.5hp, sufficient for over 100mph and Barry Sheene’s only 50cc GP win. By the end of the decade, Kreidler racers were still winning world titles with Eugenio Lazzarini’s crown in 1979 but all wasn’t well at the Kornwestheim factory. A takeover, an early Eighties attempt to up the stakes by building worthy 80cc models and plans to introduce 125cc roadsters and racers were all too late. The company went into liquidation in the summer of 1982. As a postscript, Stefan Dorflinger won the 1983 50cc world crown aboard a Krauser which was in effect a re-badged Kreidler.

All in all an impressive 30 year history for this maker of small, but perfectly formed, motorcycles. when considered in light of the excellent spares back-up available today, it makes the Kreidler a must for many tiddler fans. 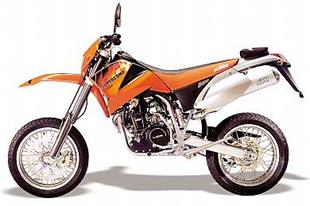 KTM 1953 – Austria
The company built their first motorcycles in 1953 when KTM was the abbreviation of ‘Kraftfahrzeuge Trunkenpolz Mattighofen’. But by 1955, founder Hans Trunkenpolz had been joined in business by Ernst Kronreif whom the ‘K’ then represented. Initial production centred around a range of 98cc Rotax engined lightweights followed by mopeds, scooters and more ultra lightweights using Fitchel and Sachs, Puch and Rotax two-stroke power.

A 125cc four-stroke, based on MV Agusta design, joined the range, but, by 1960 as finances tightened, KTM restricted production to mopeds until 1965 when they started motocross development. The first motocrossers were available to customers by the late Sixties and the firm expanded to make motorcycles once again, often using Sachs engines. Exports to the USA were sold under the Hansa label.

During the Seventies, KTM began developing their own motocross engines and came to world prominence in 1977 with Gennady Moisseyev of the former USSR winning the 1977 250cc world motocross crown.

After weathering financial crisis, KTM has re-emerged in the last decade as a maker of some of the world’s best off-road motorcycles – expensive, but superb. Early KTM roadster motorcycles, mopeds and scooters were well made, though command only modest prices. Proprietary engine spares are available but little else.