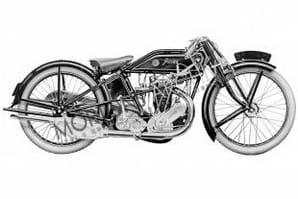 Jawa 1929 – Czechoslovakia
Like BSA and FN, Jawas were produced by an armanents factory. In 1929 Frantisek Janacek of the National Arms Factory, Prague felt his company should build motorcycles and, rather than start from scratch, they began assembling German designed Wanderers with pressed steel frames under licence.

Wanderer then failed financially and were taken over by NSU to build a second string of Sachs engine lightweights. All past Wanderer design drawings and manufacturing equipment was bought by Janacek and moved to Prague. Initially the machines were called the JAnacek-WAnderer, soon abbreviated to Jawa.

Leading British engineer/designer George Patchett joined Jawa in 1930 and helped establish them as a leading motorcycle maker. Until WWII he designed a large range of two- and four-stroke motorcycles for the factory, many with pressed steel frames. Some were powered by Villiers or Villiers-type engines, while others used Jawa’s own four- and later two-stroke units.

Jawa became a nationalised company at the end of WWII and resumed motorcycler production with a unit construction 248cc single cyclinder two-stroke, a design which was updated but continued in production for over 50 years. Jawa took over rivals Ogar in 1947, also Prague based, who were currently building 346cc two-stroke twins. The engine was installed by Jawa in their own rolling chassis from the 248cc single, leading to a long line of Jawa 346cc twins, often sold with factory-made sidecars. 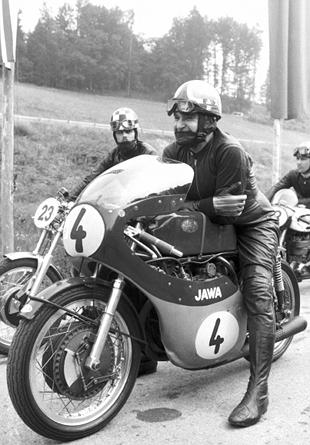 Although enjoying road racing successes Jawa were to become a byword for offroad competition in both ISDT with both two-stroke singles and later with speedway mahines, first in two-valve form and later with four-valve cylinder heads. Jawa took over the Eso speedway firm in the late Sixties, who were making very fast speedway machines with their own engine, initially based on a JAP unit. The model name was changed to Jawa, early models were two valve, superseded by a four-valve which continues today, now with the engine horizontal. Roadster production petered out in the very late Nineties but Jawa speedway motorcycle manufacture thrives.

Jawa two-stroke roadsters suffered somewhat from stigma due to the continued manufacture of simple basic motorcycles throughout the latter part of last century. Although basic they are durable, repairable and served by an enthusiastic owners club in the UK. The excellent ohc 500 twin is sought after, as are pre-WWII models.

JD 1920 – 26 UK
Powered by a single cylinder 116cc two-stroke engine, transmission was via chain primary drive to an adjustable friction roller, which ran on a rim-like pulley attached to the rear wheel. Built by control cable makers, The Bowden Wire Company, Willsden Junction, NW London, the unit was supplied as a clip-on complete with tank, controls and single speed transmission system or as a complete machine when fitted by the factory to either ladies or gents strengthened cycles. Built in moderate numbers, the few surviving examples are eagerly sought by cyclemotor enthusiasts. 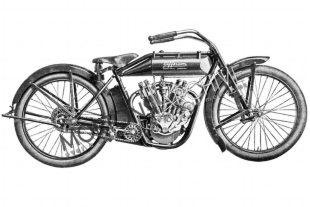 The marque was sold firstly as the Waverly, then Kenzler-Waverly, PEM and finally Jefferson. Adding to the confusion for historians the engines had either Mack or Waverly cast onto their crankcases. Roadsters were usually marketed with countershaft gearbox and clutch, but racers were stripped of tinware etc and often supplied in direct drive form by chain from crankshaft sprocket to back wheel. A superb advanced motorcycle which was expensive in its day and is now rare, sought after and expensive.

JES 1910-24 UK
Production began with 116cc single cylinder, automatic inlet valve, four-stroke clip-on attachments for cycles by JE Smith of Gloucester. Later they made complete machines and after WWI again built complete motorcycles based on this design along with uprated models with larger JES engines, two-stroke models and Blackburne engined singles. The company was taken over by Connaught in 1924. Pre-1915 JES powered cycles are eagerly sought by cyclemotorists, as they are eligible for the Pioneer Run and although slow, they seem reliable and can always be helped up the hills with pedal power.

Jones 1934-36 UK
Design co-operation between Villiers and GW Jones to develop an autocycle using the clutched single speed 98cc Villiers Junior two-stroke engine. Initial plans included the pedal shaft sited through the engine cases and clutch, although this idea was dropped for autocycles some moped makers of the Fifties and Sixties used it.

An ohv version with exposed hairpin valve springs soon followed, a racing version of which won the 350cc class of the 1932 European GP. 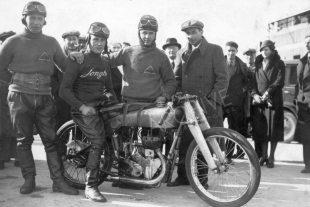 The record stood for over 35 years. Jonghi then introduced a 346cc ohc engine followed by 250cc and 175cc versions along with two-stroke lightweights. In 1936 Jonghi linked with Prester to build similar or identical models up to WWII.

After the war Jonghi unveiled a cracking 125cc unit construction single with gear driven ohc and enclosed hairpin valve springs, housed in a sprung frame with trailing link front fork. They also built a range of up to 250cc lightweight two-stroke models.

Joybike 1959-60 UK
An oddity built in Birmingham using a variety of under 100cc two-stroke engines including some pull start examples. The concept appears a cross between mini-bikes, mopeds and scooters.

JSL 1923-25 Germany
Lightweights built with a range of in house under 200cc four-stroke engines or the 206cc DKW two-stroke unit.

Juckes 1910-26 UK
Range of light to medium weight machines built by established Wolverhampton engineering firm, usually with in-house engines and gearboxes. Production started with side-valve models, then two-strokes were added to the range, including an excellent two-speed 274cc version and finally a 350cc ohv model, sold in sports and super sports trim.

Junak 1956 (1954)-64 Poland
Established under a Communist Bloc directive, Junak built just one model, the unit construction ohv 347cc single cylinder M10. Designed by Jan Ignatowicz and Stephan Porazinski, a prototype example was displayed at Wroclaw in 1954 but manufacture at SFM (Szeczin Motorcycle Factory) didn’t begin until 1956. But it wasn’t until 1958 that quantity production began. Not only was the M10 expensive in Poland but it was of basic build and had electrical faults.

Although the model was progressively updated manufacture ended in 1964 by which time the company had tried to export it to a number of countries including the USA. Some historians state Junak built both a 247cc single and twin but there is no evidence of quantity manufacture of either. A number of Junaks survive, can be bought at modest prices and in a quirky way are handsome but where on earth would you find those essential spares?

Juno 1911-23 UK
Assembler of motorcycles using Villiers, JAP and Precision engines housed in frames mostly made by Sun. Juno were one of many small makers who would often build a motorcycle around an engine of the customer’s choice. Villiers engined lightweights survive.