Iso 1948-64 Italy
Founded by Renzo Rivolta as Isothermos in 1939 at Bresso. The company was reformed as Iso Autoiveicoli SpA Rivolta in 1948. Production began with autocycles and the Isoscooter/Isomoto scooters, both with 125cc split single two-stroke engines based on Puch design. Then came their micro-car which became the Isetta, the design was licensed to BMW and the French company VELAM.

Sold in some export markets as the Iso Milano, it was one of ‘the’ scooters to be seen on for those for whom style was everything. A cross between a Vespa and a Lambetta the Diva is today sought by scooter fanatics.

Although Iso unveiled new 125/175cc motorcycles in 1961 and planned a 492cc BMW like machine, the introduction of Bertone and Ghia styled luxury sportscars powered by Chevrolet and Ford V-8 engines sounded the final whistle for two-wheelers. Production ended in 1963. 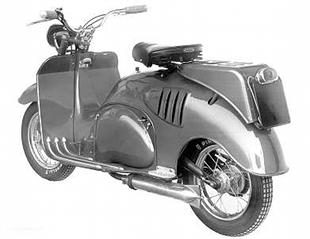 Itagaki 1954-c1965 Japan
Production began with cycle-motor units followed by scooters, mopeds, lightweight motorcycles and step-thru type machines. Never seen or heard of a survivor but according to reports were made in sizable volume therefore examples may exist.

Italjet 1966- Italy
Manufacture began with CZ and Triumph engined models by Leopolda Tartarini, then followed a link with the American former Indian dealer Floyd Clymer to build the Indian Velocette, which ended on Clymer’s death in 1970. Mini-bikes, some of which were beautifully crafted scaled down version of current superbikes and the Pack-A-Way scooter, came in the 1970s.

By the early 1990s Italjet were importing and re-badging Her Chee scooters built in Taiwan. Later they introduced scooters of their own manufacture including the 50/125cc Formula and the retro styled Velocifero.

Ito IMC 1951-c1963 Japan
Their first model was a 247cc ohv single, then later came 124/246cc two-stroke twins. Rare in Europe, but a ‘must have’ for some classic Japanese motorcycle collectors, so consequently expensive.

Popular among classic racing 50cc enthusiasts, they were outclassed by Honda, Suzuki, Kreidler etc, but are still desirable little racers; the roadsters are popular too. Early roadsters had three-speed hand-change gearbox, while the later MkVII was four-speed and the MkVIII foot-change four-speed. 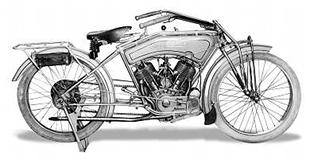 Iver-Johnson 1907-15 USA
Singles and V-twins of up to 1100cc, some later models with rear suspension. Rare and expensive.

Ixion 1906-23 UK
Built in Birmingham using proprietary engines including Abingdon and then Precision before adopting Peco and Villiers power just before WWI. Continued until 1923 then sold the brand to New Hudson. An earlier firm, also Ixion, were cycle makers who built pioneer machines with MMC and de Dion engines.

IZH 1928- Russia
Known by some as ISH. Derives its name from its home town Izhevsk. Essentially a company who copied the designs of others. Early 750-1200cc V-twins drew inspiration from American and British manufacturers then IZH began making ohc singles along German lines and aping DKW two-stroke design.

After WWII, production of a DKW NZ350 copy continued and was offered stripped for racing or competition work but it became progressively more dated. During the late-Fifties, IZH built successful ISDT Gold Medal winning models and other off-road competition motorcycles which bore little resemblance to their road going range.

The company introduced a new roadster range in 1961 comprising the twin-cylinder two-stroke Jupiter followed by the single cylinder two-stroke Planeta. Sold in vast numbers in Iron Curtain countries as well as limited export of Jupiter and Planeta to the west.