Horex 1923-58 and 1978-86 Germany
Father and son team Freidrich and Fritz Kleeman owned a number of German companies, including Rex of Bad Homburg, who made glassware and patent containers. Freidrich was also a major shareholder of cyclemotor and motorcycle engine makers Columbus Motorenwerke, while Fritz was a leading racing car driver. In 1923, the duo founded Horex to manufacture motorcycles, using their old Rex premises – the name Horex being derived from Bad Homburg and REX. The first Columbus three-speed 248cc ohv engined single appeared the following year.

The Horex factory suffered no real damage during WWII and was well placed to resume manufacture at the war’s end. With permission from the occupying forces, Horex production restarted with a 250cc single. When the imposed capacity restrictions were lifted in 1950, Horex launched their successful ohv 342cc single cylinder Regina. This tough machine thrived on minimal maintenance, was a favourite of government departments and served many clubmen racers, but was outclassed by Manx Nortons and AJS 7Rs in international competition. 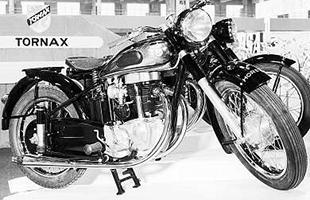 Herman Reeb designed the ohc 497cc Imperator parallel twin racer for international races. Although quick and a short circuit winner, it was unreliable in the GP arena, though continued 250/350cc success was enjoyed by Roland Schell and Hermann Gablenz. A road going version of the Imperator racer was unveiled but, despite sharing the same name, they were as different as chalk and cheese.

Like many rival German factories, Horex was struggling for survival by 1955. The 250/350cc Resident replaced the Regina, Sachs-powered lightweights including the Rebell 100 appeared as did the Rebell scooter powered by a 249cc ohc single engine. Although not a bad scooter, it never went into series production and, despite ambitious export plans, production ended in 1958.

Enthusiasts kept the Horex name alive in the Sixties, building odd machines from spares and creating Horex-derived specials. The name passed to German Ducati and Laverda importer Fritz Roth and was used by Feidl Munch on his top of the range turbocharged 1400cc NSU car engined Mammoth, called the Horex 1400TT. The 50cc Horex-Testi Rebell Sport, Enduro and Biber 40 appeared briefly but, in reality, they were the Minarelli engined Testi Champion Special, Monocross and Militar, built in Italy. A Sachs-engined 98cc Horex at the Frankfurt Show in 1956.

In the early Eighties, came Portuguese, SIS built, Sachs-engined models, followed in 1985 by 504/562cc Rotax powered singles in sports, trail and racer form called the Horex-HRD. Only a handful were built before the Italian HRD company folded. Finally, Roth linked Horex with the Indian scooter maker Bajaj (Vespas built under licence) importing machines into Europe. The marque now seems finished, but maybe it will be revived again.

Enthusiasm for Horex abounds in Germany and models along with some spares for post-WWII models can be sourced from specialists or at major autojumbles.

HRD 1924-28 UK
Famous rider/engineer and IoM TT regular Howard R Davies won the 1921 Senior (500cc) TT aboard a 350cc AJS, the only occasion a Junior machine has won the Senior. In 1924 he founded his own marque, HRD, which were initially built to a Massey design using predominately 350/500cc side-valve and overhead valve JAP engines. Thanks to low seat height, HRDs handled well and excelled in racing. Davies won the 1925 Senior TT and Freddie Dixon the 1927 Junior TT aboard HRDs. Bill Humphries of OK Supreme bought HRD in 1928, then sold it a few months later to Philip Vincent, who was backed by his father Conrad. The operation moved to Stevenage, where Vincent continued to use the HRD label for his own machines, the history of which will be covered under Vincent. Howard Davies-built HRDs are eagerly sought by both Vincent fans and vintage enthusiasts, who appreciate these well built – and often fast – motorcycles.

Hulla 1925-32 Germany
Small firm who installed DKW two-stroke and JAP four-stroke engines in their own frames and sold the completed machines solely in Germany. A few examples survive.

Humber 1896-1930 UK
Founded by Thomas Humber in 1870 to build ordinary (penny farthing) bicycles and then safety cycles, Humber fell into the clutches of a handful of entrepreneurs with less than healthy financial habits. First came Terah Hooley, who became £365,000 richer following an ambitious share flotation scheme. Then came Harry Lawson, a notable buyer of continental patents, including those for the Leon Bollee, which was to be built by Humber under licence – except that a fire destroyed everything including all company records. Then there was the American EJ Pennington, who sold designs for his motorcycle-tricycle-quadricycle for £100,000 to Humber, and, when rumbled, caught the fast boat back to America. 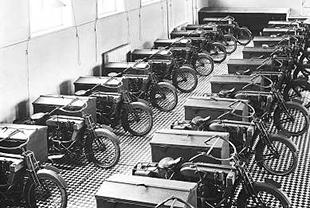 Humber could well have foundered, but in 1902, they began marketing two successful motorcycle designs. One comprised a proprietary clip-on engine mounted under the downtube of a sturdy cycle, but the other was something special – the Phelon and Raynor (later Phelon and Moore) motorcycle, again built under licence. Sold as the Humber, it comprised a purpose built motorcycle frame with the engine replacing the down tube and all chain drive and the model was also developed into a forecar.

The success of the tricycle led Humber to launch the single cylinder Humberette light car in 1903, followed by two and four-cylinder cars. Motorcycle production was suspended in 1905 but, in November 1908, Humber announced their re-entry into the motorcycle market with a 500cc side-valve, belt driver, followed by an attractive 198cc lightweight for 1910 and the superb 340cc V-twin on which Percy Evans won the 1911 Junior TT.

For the 1914 season, Humber announced a four model line-up comprising a 500cc single, the little V-twin, with an increased capacity of 349cc, the economy 198cc model and 750cc flat three. A single larger cylinder of 78 x 78mm faced forwards while two cylinders of 55 x 78mmpointed back, but the three never went into production. Humber motorcycles weren’t in demand by the military during WWI, although a batch of outfits was supplied to the Russian forces.

After the war, Humber launched a range of flat twins including 500 and 600cc models, which excelled in trials like the Colmore and Victory ridden by Walter Brandish, Len Crisp, Dick Grindlay, Manco Scally and Sam Wright. Humber then launched a neat 350cc side-valve with which they won a manufacturers trophy in the 1923 ACU Six Days Trial.

Concentrating on car production, the flat twins were dropped but an ohv 350 was unveiled. Despite playing second fiddle to car manufacture, motorcycle quality remained high and, in 1927, Humber surprised the motorcycling world by launching a 350cc ohc single at the Olympia Show. To help weather the depression though, Humber dropped motorcycle manufacture in 1930.

Hurtu 1903-c1958 France
Starting out as cycle makers, The Compagnie des Cycles et Automobiles first became involved in vehicle production as sub-contractors for Bollee. Although better known as car makers who made lusty models of up to 4½ litres, Hurtu began making motorcycles in 1903, later concentrating on the lightweight market. After WWII, the Rueil factory with offices at Rue Castagnary, Paris built a range of smart mopeds and autocycles with VAP engines and a Sachs powered lightweight motorcycle, the VM52.

Husqvarna 1903- Sweden/Italy
Husqvarna’s roots stretch back to 1689 when The Royal Arms Company was founded. In 1867, a subsidiary company, Husqvarna was established at Husqvarna, Sweden, again to make arms. As cycling gained popularity, Husqvarna branched out into cycle production and in 1903, built their first motorcycles settling on tiny 1¼hp FN units, then adding NSU power to the range before finally switching to Swiss made Moto Reve power in 1909. 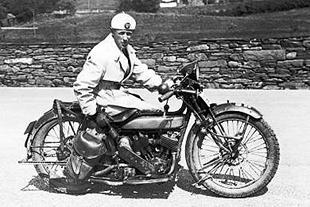 During the vintage period, Husqvarna developed their own engine designs, but production costs made these ideas uneconomic. By the late Twenties, they were sourcing engines from other makers, including JAP and Sturmey Archer. The company began enjoying national racing success, a programme that enjoyed a boost when Folke Mannerstedt joined the firm in 1928 to develop the Husqvarna ohv V-twin, as well as undertaking further work on JAP units.

Although enjoying national success, Husqvarna found it less easy on the international scene. Tragedy struck in 1934, when works riders Gunnar Kalen and van der Pluym were killed. Irishman Stanley Woods joined the team and won the 1935 Swedish GP but despite this, the efforts of Ernie Knott and enormous cash input, Husqvarna often trailed home behind the British Nortons and they withdrew from racing at the end of the 1935 season.

Despite an impressive range, Husqvarna had built just 15,000 motorcycles by 1936 and sales were sliding. As other facets of the business were subsidising the motorcycle division, the directors instigated a lightweight programme, commencing with the basic 98cc model 301 – in effect a two-speed autocycle – of which 15,000 were sold in its first year. After WWII, the 118cc two-stroke three-speed Skartkvarnan motorcycle was launched, leading to a range of lightweight roadsters and Husqvarna’s interest in the ISDT and motocross. In 1959, Rolf Tibblin won 250cc European Motocross Championship on a works Husky.

Bucking the directors’ decision to concentrate on lightweights alone, Husqvarna designed a full 500cc motocross model for the 1960 Motocross World Championship. The 485cc single cylinder two-stroke took Bill Nilsson to the year’s title with team-mates Sten Lundin and Rolf Tibblin second and fourth. Brilliant results, but all was not well on the home front for in 1961, thanks to a decline in the roadster market, sales plummeted to just 423 units. The directors met again and Husqvarna adopted an off-road only policy. Through the Sixties, more motocross titles were won by Rolf Tibblin, Torsten Hallman and Bengt Aberg.

As well as brisk sales among off-road enthusiasts Husqvarna gained military contracts and even dabbled once again in road racing. By the Seventies, sales had started to slip again and Husqvarna lost the military contract to Hagglund who supplied a specially developed model with automatic transmission controlled by belts. Husqvarna regained the contract in 1976, supplying a version of their automatic 360cc motocrosser launched a year earlier.

Development of new models, especially for the American market continued. With concerns over the emissions of two-stroke models Husqvarna once again developed four-stroke engines for their off-road models, especially the enduro range. In 1986 Cagiva bought the motorcycle division of Husqvarna, moving production to Italy. Manufacture continued with a range of 125-500cc two-stroke off-road models and a 600cc ohc single four-stroke thumper. Other than the motocross/enduro type machines, few Swedish built Husqvarnas have escaped their native country.