Glas 1951-56 Germany
A range of 123cc, 148cc and 197cc Ilo two-stroke engined scooters with tiny 8in wheels and bulbous bodywork from Hans Glas, the same company who built the Goggo Mobil microcar. The scooters were named the Goggo 125, 150 and 200 as appropriate.

Gloria 1948-55 Italy
Mopeds and up to 125cc two-stroke lightweights designed by Alfredo Focesi, some with engine mounted on the rear swing arm. 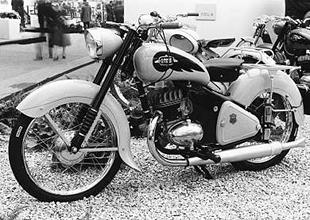 Gnome et Rhone 1919-59 France
Renowned aircraft and aero component manufacturer who began production under licence with the Granville Bradshaw designed ABC ohv flat-twin, built in the UK by Sopworth Aviation. The Paris based company then designed and manufactured an extensive range of well engineered four-stroke singles in the Twenties and a BMW-like flat twin in 1931.

Considered by many to be the Rolls-Royce of the French motorcycle industry during the Thirties, Gnome et Rhone’s top of the range model was the Type X, a shaft drive ohv flat twin with pressed steel frame. As war clouds gathered, Gnome-Rhone introduced three military models, the D5A, 499cc side-valve, single cylinder, dispatch and military police model, and two flat twin multi terrain outfits, the AX2, 804cc side valve and the 750 Armee, 724cc ohv model. After the occupation of France, many of these models were used by the occupying German and Axis troops.

Goricke 1903-c1980 Germany
Leading cycle manufacturer who began small volume production with single and V-twin engined motorcycles, many of which could be converted to three-wheels with factory made forecar. During the Twenties, they went on to install Villiers, MAG and Blackburne engines in a range of light to medium weight machines and sportsters.

Post-WWII motorcycle production restarted with a range of Ilo and Sachs engined lightweights. Mofas, mopeds and then scooters joined the range. The first, the Go-Mo 100, launched in 1951, comprised single seat open bodywork powered by an exposed 98cc Ilo engine. If this model was less than attractive, then the 50cc Ilo or Sachs engined Gorette stradroller (town-scooter) was even worse, though today, they have become collectable. As the European motorcycle market declined, Goricke concentrated on mofas and moped production until sales petered out in the late Seventies.

Due to small volume production, pre-WWII models are rare. Postwar lightweights, scooters and mopeds are sometimes offered for sale at Northern European autojumbles and the spares situation for many Sachs and Ilo engines is fair to good.

Grasetti 1952-65 Italy
Range of well made 123/148cc two-stroke lightweights using Grasetti’s own engines. Can be found at Italian autojumbles. 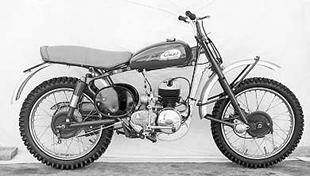 Greeves 1953-78 UK
For those of us brought up in the Sixties, Saturday afternoon was incomplete without our fix of BBC Grandstand scrambling. Hawkstone Park and Tweseldown were as familiar as our front room. The David and Goliath feats of Greeves stars Dave Bickers, Alan Clough, Freddie Mayes et al versus the mighty BSA, AMC and Metisse 500s were legendary.

A sentimental view maybe, but Greeves delivered with European Championships for scrambler Dave Bickers and trials star Don Smith, plus thousands of wins and places for clubmen around the world. Two men, aided by factory engineers and riders, led model development. Bert Greeves came up with the idea and Brian Stonebridge knocked it into shape.

The Essex firm was established by Bert Greeves and his physically disabled cousin Preston Derry-Cobb to manufacture Invacar invalid carriages. Works manager Frank Byford built the first motorcycle as a test bed for an invalid carriage rubber in torsion suspension system, cruelly dubbed rubber in torture by decriers. Early inklings of Greeves motorcycle production appeared in The Motor Cycle, 10 May 1951 and the first Greeves line-up of three 197cc Villiers engined motorcycles was announced in September 1953 – the 20R and 20D roadsters plus the 20S scrambler. By the November Earls Court Show, the 20T trials model and 242cc 25D Anzani engined roadsters had joined the range.

Announced for the 1955 Earls Court Show, the larger 32D Fleetmaster had a 322cc Anzani twin cylinder engine. Although roadster twins went over to Villiers power for the 1957 season, the Greeves mould had been cast. Sports Singles, Sports Twins, Fleetwings, Fleetstars, Sportsmans, the Essex, East Coaster and a host of other variants rolled out of the Thundersley, Essex factory.

Brian Stonebridge joined Greeves in January 1957 and, helped by Bob Mills, established a development workshop in a former chicken shed, transforming Greeves off-roaders from competent motorcycles to giant killers. Hawkstone scramblers and the 197cc Scottish trials iron were suddenly regular winners in the hands of Dave Bickers and Don Smith. Although odd duff models, like the 2T twin cylinder 24SAS Hawkstone Scrambler appeared, Greeves established their reputation with a range of winners.

A brilliant future was assured, but suddenly tragedy struck. Brian (Strawberry) Stonebridge was killed in a car crash in October 1959 when Bert Greeves was driving.

The factory gathered itself, development continued and those involved honed new skills – including Don Smith, who saw the Scottish programme through to its end and was involved with development of the Anglian. Greeves began making their own Challenger scrambles engines, at first just a barrel replacement for the Villiers engine, and then using their own crankcases and bought in gearbox. The competition range was supplemented by ISDT models, plus the Silverstone and, later, Oulton road racers.

By 1966, quantity manufacture of roadsters had ended and Greeves needed new competition models, but the factory seemed to resist development. Then the end of Villiers motorcycle engine production hit the trials programme – although the firm later produced the Puch engined Pathfinder in 1970/71. Scrambler manufacture continued, using Greeves’ own engine. 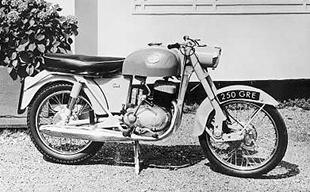 A new, all tubular-framed Griffon got its first public airing in the hands of Arthur Browning and Vic Allan in May 1968 but, sadly, the decline of Greeves had started. Bert Greeves sold his shareholding in 1973 and, although Griffon production – helped by engine development by Dr Gordon Blair of Queens University – continued, the writing was on the wall.

The once popular Invacar was replaced by a mobility allowance in 1974, Derry Preston-Cobb retired in 1977 and in May 1978 the very last Griffon MkII was built.

Owners of Greeves motorcycles enjoy the back-up of an excellent club, specialist spares suppliers and the current superb parts situation for Villiers engines.

Bert Greeves never registered the Greeves name but in the late 1990s Chelmsford enthusiast and businessman Richard Deal did. Since 2000 Greeves have built small numbers of trials machines, some of which were based on mid-1960 designs.

Manufacture at the Courbevoie factory continued after WWI with a range of two and four-stroke machines until Peugeot absorbed the firm and Griffons became re-badged Peugeots. Few examples survive in the UK but often appear at Continental events. 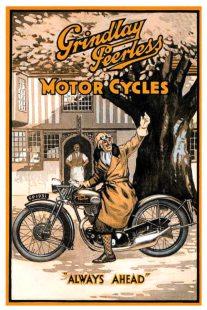 Guazzoni 1949-79 Italy
Former Moto Morini employee Aldo Guazzoni established his Milan factory to build stunning two-stroke lightweights. An ohc 191cc sports model joined the range in 1954, which excelled in the long distance Italian road races of the Fifties. A 175c horizontal-engined two-stroke was announced in 1959 and was imported into the UK by Dot. Smaller versions followed.

Guazzoni unveiled a 60cc disc-valve racer in 1966, the 50cc version of which enjoyed national success in 1969, though the 125cc twin racer fared poorly. The last decade of production concentrated on 49cc mopeds and ultra lightweights. Apart from those models imported by Dot, more Guazzonis are washing up in the UK and northern Europe thanks to the Italian classic specialists. Some spares exist in Italy but supply is patchy.

Guiller 1950-c1958 France
Mopeds and up to 250cc lightweights housing French made proprietary engines by Rene Guiller at his Fontenay-le-Comte factory. Functional machines can be bought for modest sums at French autojumbles.

Guizzo 1955-62 Italy
Bologna firm, established to make mopeds, who successfully introduced a 149cc scooter just as worldwide sales of scooters were plummeting – an error of timing which caused the factory to close in 1962.