Gilera 1909 – Italy
Born in December 1887, Guiseppe Gilera began making motorcycles in 1909 after gaining engineering expertise at Bianchi, Moto Reve, and Bucher and Zeda. A 317cc single was soon followed by a V-twin and the first of many 500cc singles.

Customer demand after WWI encouraged Guiseppe to open a larger factory at Arcore, between Milan and Lecco. A 499cc inlet over exhaust valve single, the Turismo appeared in 1920, joined five years later by a 346cc version and sports models. In 1929 the range went over to ohv design, by which time, Gilera had become one of Italy’s largest motorcycle manufacturers and gained many victories in national and long distance trials.

Around 1935, Gilera snapped up the rights for the futuristic, four cylinder, dohc, water-cooled Rondine racer designs – a concept which appeared over a decade earlier as the sohc GRB (Gianini Remor Bonmartini).

In less than a year, a team of engineers led by Count Guiseppe Gilera, Piero Remor and Piero Taruffi reworked the model to include uprated supercharging, tubular instead of pressed steel frame and swing arm rear suspension. The 492.7cc four powered Piero Taruffi to a new motorcycle land speed record of 170.27mph (274.181kph) at Brescia in 1937 and Dorino Serafini to the 500cc European Championship in 1939.

On the roadster front, Gilera had begun making lightweight motorcycles including the 175cc Siro and in 1936 launched their moto carri (motor truck), which remained in production for three decades.

On the works front, Gilera developed smaller supercharged fours in 1939/40 but, following the postwar FIM ban on supercharging, Gilera returned to the 500 four, which Ing Piero Remor, inspired by the work on the earlier smaller racers, redesigned.

Along with Mondial and Moto Guzzi, Gilera retired from GP racing due to the expense, but returned briefly in 1963 via Scuderia Duke, which ran six-year-old machines with some success. John Hartle, Phil Read and Derek Minter ended third, fourth and seventh in the year’s 500cc title chase behind Mike Hailwood’s MV and Matchless rider Alan Shepherd. Argentinian Benedicto Caldarella gained second place in the 1964 Italian GP, while Florian Camathias scored Gilera’s last GP win in the opening 1964 sidecar round at Barcelona. Briefly, Gilera entered the 125cc class with R Ferri securing the runner-up slot in 1956.

During the Fifties, roadster production began to focus on the lightweight classes with a range of super 98-200cc ohv singles and a 300 twin (305.3cc). A drive for sales in the Sixties, in the face of stiff competition, led to the short lived (1962-6) G50 and G80 scooters which looked similar to rival Vespa models. In the late Sixties, ohv and ohc 500cc twin cylinder prototypes were built along with a stillborn 750cc triple.

Gilera roadsters from lightweights to the 499c Saturno singles are still being found in the yards, barns and sheds of Italy and brought to Northern Europe by specialist dealers. Usually with little rust and often still in running order, they make excellent restoration projects. They look good, handle well and many mechanical spares can still be sourced through specialist dealers.

Gillet-Herstal 1919-60 Belgium
Founded by Leon Gillet in 1919, Gillet-Herstal, along with Sarolea and FN, became one of Belgium’s major motorcycle makers. Production started with a 301cc Fernand Laguesse designed two-speed two-stroke. Although the company then concentrated on further two-stroke development, including an unusual rotary-valve model with one side of the mainshaft supporting three ratios for the gearbox, they also built motorcycles with Swiss MAG engines.

Four-stroke engine development began during the mid-Twenties, but two-stroke experimentation continued, including the unit construction flat twin, two-stroke 720 Model with chain drive to rear wheel and shaft drive to the sidecar wheel supplied to the Belgian military 1938-40. 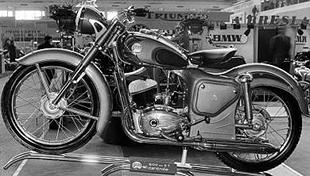 Re-entering motorcycle production after WWII with four and then two-stroke commuter style models, telescopic front forks were adopted across the range. Swinging arm rear suspension was introduced in 1946 with the launch of the 239cc two-stroke Superconfort.

Gradually, Gillet-Herstal moved over to an all two-stroke range, including a 125cc scooter built under licence from Bernardet, launched in 1953. The shrinking European motorcycle market led to Gillet-Hertsal joining in 1955 with Sarolea and FN in a vain attempt at survival. Even the introduction of a robust moped, built under licence across the group, couldn’t save this once famous marque.

Pre-WWII Gillet-Herstals are highly prized and sought after. Postwar lightweights surface at European autojumbles as do some spares.

Gitan 1950-85 Italy
The San Marino factory of Gitan, GIno and TANsini (the founder) began production with a pretty DKW RT125-like two-stroke and a 160cc unit construction four-stroke which was enlarged to 175cc in 1955. During the late Fifties, Gitan introduced the pressed steel framed Grillo (Cricket) which looked similar to the Honda Cub. Sales dwindled in the Sixties, but the business soldiered on until 1985 building mopeds and ultra lightweight motorcycles.

Gitane 1953-80 France
Cycle factory from Vers, which began making proprietary engined mopeds and lightweight motorcycles and absorbed by Renault in 1980.

Giulietta 1959-80 Italy
Maker of mopeds and tiny lightweight motorcycles including motocrossers and sportsters powered by Sachs, Morini and Minarelli two-stroke engines. Also sold in Italy as the Peripoli and, re-badged during the mid-Seventies as the AJW, in the UK.