Douglas 1908-57 UK
One of the most successful and versatile motorcycle manufacturers ever. They won the Junior, Senior and Sidecar TTs, excelled off-road including ISDT, built the ultimate speedway machine, supplied motorcycles in their droves to the allied forces, pioneered disc brakes, built industrial engines, military equipment, cars, scooters (under licence), electric floats, industrial trucks, aircraft engines, aircraft components, tractors, cast drain covers, lamp posts, shoe lasts and 1001 other things in iron and experimented with ‘other’ forms of transport including the Dynasphere? Sadly, this innovative company was continually strapped for cash and struggled for survival.

Scottish brothers William and Edward Douglas founded the Bristol based Douglas Engineering Company in 1882 and, with £10 borrowed capital, bought a portable forge, vice and grindstone. Soon their foundry was supplying lasts to the local footwear trade and they diversified into other castings.

In 1910, Douglas offered an optional two-speed gearbox, in 1911 they tied for the team prize in the Six Days Trial and, in 1912, Harry Bashall won the IoM Junior TT with colleague Teddy Kickham second.

Contracts to supply 23⁄4hp and 4hp motorcycles as well as industrial engines and military equipment to the Allied war effort during WWI followed. Civilian motorcycle production restarted after the war with side-valve models but, by 1920, Douglas had an ohv racing model – a road going version being introduced a year later. Although early post-WWI TT results were disappointing, Douglas rider Tudor Thompson went on a solo and sidecar World Record breaking spree at Brooklands in Autumn 1921.

With Royal patronage, forthcoming TT wins for Freddie Dixon (1923 sidecar), Tommy Sheard (1923 Senior), Len Parker (1925 sidecar), disc brake models, a range of side-valve workhorses and ohv sports machines, the later EW range, a brief period manufacturing the most successful speedway machine until the Rudge came along, the future for Douglas should have looked rosy. But it didn’t. With eight different model ranges between WWI and 1932, as well as a multiplicity of engine permutations, Douglas eventually needed outside financial help. Douglas Motors (1932) was formed.

Within a year, that company folded, despite the new model range including a two-stroke lightweight as well as the familiar twins. Somehow William Douglas started again, this time as William Douglas (Bristol) Ltd with a nine model range comprising five side-valve flat twins (250-750cc), two ohv versions (500/600cc), an army 350 and the two-stroke. Sales were slow and the introduction of the interesting, but problematic and expensive, shaft drive, 494cc, side-valve Endeavour didn’t help.

In late 1945 Douglas announced their new motorcycle, a 350cc transverse twin with chain final drive and torsion bar front and rear suspension. Coded the T35, the model seemed, to Douglas enthusiasts, a breath of fresh air compared with the pre-WWII models offered by rival companies. The ‘Mark’ series and the faster 80 and 90 plus derivatives followed.

Financial disaster struck again in 1948, an official receiver was appointed and another new company Douglas (Sales and Service) Ltd was formed to market Douglas motorcycles. They also began assembling Vespa scooters under licence from Piaggio.

The attractive 350cc 90 Plus, in effect the racing version, pushed out a healthy 28hp and Douglas, albeit briefly, enjoyed racing success again. Despite the 1952 announcement of a 500 transverse twin and Freddie Dixon’s improvements to the racing model, Douglas’ grip of the motorcycle market was slipping for the last time. In 1954 the range comprised only the new Dragonfly, with its 348cc transverse twin engine housed in a Reynolds tube frame with Reynolds-Earles front fork. Sales were slow, production ended in 1957 and Pride and Clarke sold the remaining stock. However, the scooter involvement was to continue for some time.

Douglas enthusiasts are served by one of the best one make clubs in the world, who offer spares, technical help and identification advice.

D-Rad 1921-33 Germany
The first D-Rad, a 393cc fore and aft side-valve flat twin, was based on the British Douglas design. A heavy, durable, 496cc side-valve single with sloping engine followed. In 1927, former Victoria and BMW engineer Martin Stolle joined the Berlin-Spandau works and updated the range to include an ohv single. D-Rads excelled in long distance trials and were raced in national events. The company branched out into lightweight two-stroke production before the plant was taken over by NSU in 1933. 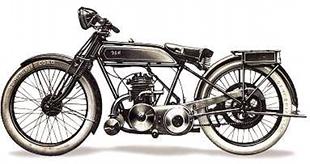 Sadly, Dresch production ended in 1939 – a shame, for many models bristled with leading ideas of the period including centre stands, servo brake action and anti-vibration, leaf spring handlebars. Dresch rolling chassis spares are non-existent but, as JAP, MAG, Chaise and other proprietary engines were employed, there’s hope for engine parts. A few models have found their way to the UK and examples crop up at French autojumbles.

DS-Malterre 1920-58 France
DS (Deblades & Sigran)-Malterre from Paris built durable side-valve four-strokes before WWII plus 125-250cc Ydral two-strokes and AMC four stroke lightweights after the war – a number of which have found their way out of France. Second-hand engine spares can be found at French autojumbles for the Ydral/AMC engines, but little else.

DSK 1954-62 Japan
A range of lightweight two-strokes and a 500cc ohv flat twin loosely based on BMW design, predominantly for the Japanese home market. A few highly prized examples have escaped to European collections.