Dayton 1913-20 UK
Initially built 149 and 162cc, single cylinder, two-stroke cyclemotor attachments, then complete machines and finally, 269cc Villiers powered motorcycles. Examples of most models survive. Dayton 1954-60 UK A valiant attempt to build a well engineered but unorthodox Villiers engined scooter. Production started with the 224cc 1H powered Albatross, sporting Earles type front forks and an air-cooling channel fabricated into the chassis from the front wheel to the engine under the seat (a necessity as neither the 1H or 2T had cooling fans). A Villiers 2T engined example, the Albatross Twin, joined the range in 1957. Renamed the Empire a year later and with a revised front mudguard, the single cylinder model, when fitted with 2H engine, grew to 246cc and the Continental Twin was launched.

In 1959 the single cylinder model was renamed the Continental single and the final new model, the 174cc Villiers 2L powered Albatross Flamenco was launched. Basic bodywork design was a joint venture with Panther (Princess) and Sun (Sunwasp). Post-WWII Villiers spares are plentiful, but not Dayton bodywork. 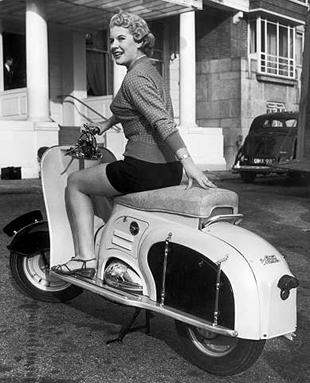 De Dion Bouton 1883-1932 France
Never actually motorcycle makers, but a company of vital importance to us. Steam carriage builders, Bouton and Trepardoux were backed by Comte Albert De Dion – Trepardoux designing the famous De Dion axle before resigning in 1894 when De Dion and Bouton were ‘dabbling’ with petrol engines. Their ‘dabbling’ led to the world’s first ‘high speed engine’ claimed to rev to 3500rpm. These little engines became progressively more powerful and were fitted to various tricycles – many built under licence – including De Dion’s own. De Dion engines also powered an array of pioneer motorcycles, examples being Matchless and Excelsior.

Proprietary engine manufacture gave way to car production during the Edwardian period. The name was used for small-scale motorcycle production in the late Thirties and again in the Fifties, but the link with the original company was minimal.

Dei 1932-66 Italy
Umberto Dei bought the established Ancora factory in 1932 and offered a range of lightweights, often with Garelli or Sachs engines, under the Dei label. Another Italian ‘home market’ motorcycle now finding its way to North European autojumbles.

Derbi 1950 – Spain
Simeon Rabsa Singla began building bicycles in 1922 but waited until 1950 before building a motorcycle called the Derbi – an acronym from ‘derivados de bicicletus’ (derived from bicycles). Production in the Fifties and Sixties comprised 50-350cc two-stroke motorcycles and, briefly, scooters like the 98cc Masculino (1953-7) and 125cc Masculino (1955-57). The company began supporting lightweight racing in Europe finding international fame in 1962 when the Spaniard Jose Busquets finished second to Hans Georg Anscheidt’s works Kreidler in the first ever 50cc GP. Derbi ran a works race team for many years with Australian Barry Smith winning the last 50cc IoM TT in 1968 and the fiery Spaniard Angel Nieto winning their first of many World Championships, again in the 50cc class a year later.

The firm continues to build lightweights, trail machines and scooters. Models from the Fifties to the Seventies surface – including the occasional racer. Spares are difficult but these lightweights, some with reed valve induction, are well worth the effort.

Derny 1949-58 France
Lightweight motorcycles and scooters often assembled with proprietary engines including the French built AMC units built by the Parisian maker. Although serious production didn’t start until 1949 they did make a few bicycle auxiliary engines before WWII, some of which were raced on the Paris cycle tracks.

Devil 1953-c1960 Italy
Well made two and four-strokes from 48-175cc. Typically Italian lightweight motorcycles, the sports model performs well too. Like many Italian machines, exports were limited but examples now find their way out of Italy. Different, but spares are difficult.

DGW 1927 Germany
Brand label used by DKW for motorcycles brought into the UK in 1927 due to a trademark dispute. Dropped once problem resolved. 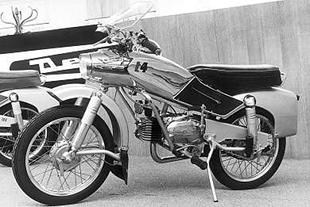 Diamant 1903-07 and 1926-40 Germany
Briefly built forecars and motorcycles, often with Fafnir engines, before abandoning production in 1907. Manufacture restarted with 346/496cc single cylinder motorcycles with their own engines as well as JAP units. Later production concentrated on Sachs and DKW-engined lightweights. Production of some Opel motorcycles, including the Duralumin framed models, also took place at the Diamant works.

Diamond 1910-38 UK
Built by the DF & M Eng Co of Birmingham, early examples included an advanced 249cc, single-cylinder lightweight with four-valve head, entered in the 1920 IoM TT. Despite early promise, all three entries retired. Six years later Syd Gleave was seventh in the Lightweight TT, riding a conventional 246cc two-valve model. Until the Thirties, production concentrated on Blackburne, Bradshaw, JAP and Villiers powered motorcycles after which they made Villiers-engined lightweights only. A 1924, 147cc, two-speeder had been active in VMCC events for the past 30 years. Survivors are rare.

DKR 1957-66 UK
The Wolverhampton firm of DKR entered the scooter market in 1957 with the 147cc Villiers 30C powered Dove, sporting 10in wheels, leading-link fork and bulbous front bodywork. A year later the Villiers 148cc 31C-engined Pegasus and 197cc 9E powered Defiant joined the range, followed by the Manx with an electric start Villiers 2T twin cylinder unit. The Dove was uprated with the 31C engine, becoming the Dove II and the Pegasus gained the 174cc Villiers 2L unit in 1960. Later, all models were replaced by the Capella. Good supply of Villiers spares, but tinware is near impossible to find.