Cotton 1919-80 UK
Frank Willoughby Cotton, the law student son of a Herefordshire farmer, competed in trials and hill climbs often riding an open framed Scott. Inspired, Cotton designed a light but strong triangulated frame which the Butterfield Bros at Levis tested before the outbreak of WWI. Patenting his design, 17434/1914, Frank toyed with the idea of becoming a motorcycle manufacturer for a couple of years before dropping out of college to establish a business at 11A Bristol Road, Gloucester.

Early examples had Villiers engines, belt drive and two-speed gearboxes and as trade picked up Blackburne and later JAP engines were also used. In 1922 a young Irishman, Stanley Woods, wrote to Mr Willoughby with an inventive CV of his racing prowess and just months later he was fifth for Cotton, despite a string of mishaps, in the 1922 IoM Junior TT. A year later he won the event riding a Cotton Blackburne, and in 1926 Paddy Johnston won the Lightweight TT for Cotton with Morgan second on another. All models were similar to those available in local showrooms. But what made this machine from a small Gloucester factory so special? Simply the frame, which gave its riders the edge over rivals. Not only was the Cotton design rigid but its compact style, sloping engine and low centre of gravity improved cornering speeds.

Coventry-Challenge 1903-14 UK
Cycle dealer/designer who built limited numbers of motorcycles using proprietary engines. Taken over by neighbours Coventry-Eagle who used the badge on certain lightweights up toWWI. Prototypes were built after the war but didn’t go into production.

Coventry-Eagle 1901-40 UK
Coventry-based Victorian cycle maker who manufactured the Mountezi cycle. They were built low to enable the cycle to be mounted and started from a standing position along with the sturdy mail cycle with tropical cushion tyres. They began motorising cycles with De Dion and MMC engines in 1901. At the 1903 Agricultural Hall Show in London they exhibited a range of purpose-built motorcycles and a ‘Trimo’ three-wheeler.

Manufacture then faded until, perhaps prompted by the takeover of Coventry Challenge, they began building 269cc Villiers-powered lightweights before WWI. Slow to restart production after the war, the company offered in 1921 a full range of lightweights, single and V-twin JAP-powered models, many designed by Percy Mayo, one of Coventry-Eagle’s proprietors. The range expanded rapidly over the next three years to encompass more Villiers-powered lightweights, JAP side-valve engined singles and V-twins for solo and sidecar works as appropriate and the Flying-8 and Super Sports 1000cc V-twins. Bert Le Vack raced a specially tuned 1000cc Coventry-Eagle at Brooklands.

More of the same followed for the next three years, but with the world sinking into depression Coventry-Eagle began to focus on the economy end of the market, launching a 147cc Villiers engined lightweight with an all new pressed steel frame in 1927. Over the next three years many of the larger models were dropped while the pressed steel frame range was increased to include 172cc and 196cc versions. These proved less popular than the 147cc model and were dropped in the early 1930s, the only models offered by 1933 were the 148cc and 250 (either two or four-stroke) motorcycles and a 98cc Villiers-powered autocycle, the Autoette.

Spares for many of the proprietary engines and gearboxes fitted sometimes appear at autojumbles, but beware heavily rusted pressed steel frames.

Coventry-Victor 1919-36 UK
Manufacturer of horizontally opposed flat twin cylinder proprietary engines who also made motorcycles, including a speedway model and a three-wheeled car. Survivors are rare. 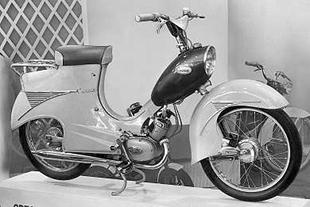 Crescent 1954-80 Sweden
Boat outboard motor and cycle company who built predominately lightweight motorcycles and mopeds, later Monark scooters sold in some markets under the Crescent banner. Member of the MCB group which later became part of Volvo. Not imported into the UK but odd examples, often turn up at Continental autojumbles.

Crocker 1936-40 USA
Shoestring manufacturer of awesome ohv V-twins which were designed and built by Al Crocker to humiliate Harley-Davidson and Indian. Developing 53hp at 5800rpm they are highly prized collectors’ items today and priced accordingly. Al’s motorcycle production efforts ended with WWII but he went on to make a sizable fortune developing semi-automatic engineering machinery.

Csepel 1932-52 Hungary
Manufacturer of lightweight two-stroke commuter machines in Budapest as part of the Manfred Weiss steel empire. Under state control after WWII, then re-badged as the Pannonia or Danuvia in 1952. Examples, but not spares, are now appearing at major Continental autojumbles.

Cushman 1936-65 USA
The Cushman phenomenon was, and still is, unbelievable and solely American. The concept of installing a readily available lightweight industrial engine into a minibike or scooter has appealed to many. Most attempts failed dismally or, at best didn’t overwork the cash registers, but for over 25 years the Cushman was a rip roaring success – and rightly so. Simple, reliable, inexpensive, available in many guises, they were marketed through an extensive dealer network and superbly promoted – their catalogues and adverts enlivened by the lavish use of current buzzwords.

‘Kids’ of all ages bought the Cushman (and still do), initially as cheap transport in the recovery period after the Great Depression, later as fun transport for local trips or on vacation. Yet production started by chance.

Cushman were well established industrial component and engine manufacturers, when Salisbury – whom Cushman later rivalled – expressed interest in the purchase of 1000 Husky four-stroke lawnmower engines – but then looked elsewhere. At the same time teenagers began powering home brewed scooters with Husky engines and the Cushman phenomenon thumped into life.

Production began with the side-valve Husky 1½hp powered Auto-Glide 1-1 and 1-2 scooters in 1936. Further variations on the Auto-Glide theme followed including the 2hp Package-Kar, an Auto-Glide with two wheels and a carrier box at the front. Military Airborne models and an extensive scooter range including the Highlander, Pacemaker and Road King followed. In 1961 Cushman began marketing Italian Vespa scooters.

Radically, Cushman went for an additional slice of the market in 1949 as they unveiled their first motorcycle, the Eagle. Although sticking with small wheels and Cushman industrial engines of up to 8hp, the machines progressively looked more and more like a mini Harley-Davidson even down to the screen, big bars and generous saddle. Accessory sales were strong too, including chrome embellishments, mirrors, lights and a carrier mounted seat for your girlfriend or buddy. A Cushman plant was established at Anderlues, Belgium, in 1950 as part of the European Recovery Act after WWII. Sadly Europe wasn’t ready for this American sensation.

By the Sixties, Cushman had lost its way, marketing Vespas with the Cushman logo on the leg shield. This confused many dealers who switched instead to Honda lightweights, and in 1965 Cushman quietly dropped out of the motorcycle/scooter game. The Cushman has now become a collectors’ phenomenon in the USA commanding big bucks but less so elsewhere.