Ciamatti 1950-84 Italy
Former Olympiad Marco Ciamatti – cycling gold medalist as part of the Italian team in the 1932 Los Angeles Games – founded a cycle factory at Porta Lame in 1937. Although the works were destroyed during WWII, Marco was back in business by 1946. Motorcycle production started in 1950. Throughout their production run the backbone of Ciamatti was an extensive range of two-stroke 50cc models to suit every Italian from the local handyman to the ‘coffee bar kid’. In 1960, Ciamatti relocated to Pioppe di Salvaro in the Appenines and even hit sporting fame during 1966-68 when their machines secured the Italian 50cc trials championship. In the Sixties, two-stroke 100/175cc Sport Lusso models and later, 125cc enduro and motocross models, were built too.

When Enrico Ciamatti took over company management he instigated an export drive to America, France, Norway and North Africa. Keeping pace with fashion, mini bikes including the Mini-Chic and Bob Cat were launched in the Seventies along with a range of children’s machines. Ciamatti never built their own engines, buying in variously from Franco Morini, Minarelli, Demm and others.

Many may never have heard of Ciamatti, but throughout the Seventies they were building over 50,000 motorcycles a year and total production was well over one million units. Despite apparent success the company suddenly collapsed and closed in 1984.

Cito 1905-27 Germany
Established cycle makers who began building small numbers of Fafnir engined motorcycles in 1905. After WWI, production restarted with 346cc two-stroke singles at the Suhl factory. As sales picked up, production transferred, first to near neighbours Krieger-Gnadig (KG), then in 1923 to Allright and finally, as KG, to the Paul Henkel factory. Although survivors exist, you may need to dig deep to buy one!

Cityfix 1950-53 Germany
Badge engineering – for the Cityfix was another name for the Sachs and Lutz engined Delius scooter-like machines.

Clement of Levallois Perret continued with motorcycles after WWI marketing most models as Clement-Gladiator. Production levels were low and survival is doubtful. Models included JAP powered means, one of which was raced by the renowned lady rider Gwenda Stewart.

Cleveland 1915-29 USA
A rare early American two-stroke motorcycle maker. Launched in July 1915 as a two-speed 222cc single cylinder two-stroke which looked similar to the British made Triumph Junior. Engine enlarged to 269cc to become the Cleveland 20 in 1919. Sold well in Holland and France but, despite the efforts of the importers – North Western Motors Ltd, Liverpool – poorly in Britain due to its high cost. A 350cc side-valve single cylinder four-stroke appeared in the mid 1920s followed by a 600cc in-line four which grew to 750cc then 1000cc. Marque folded in 1929, a late victim of the Wall Street Crash. 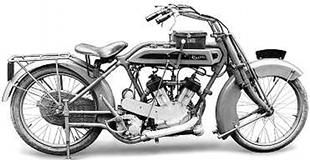 Clyno 1909-23 UK
Clyno were makers of high quality V-twins, both pre and post WWI. Thrapston, Northamptonshire-based cousins Frank and Alwyn Smith invented a two-speed pulley attachment for pioneer single speed motorcycles. Initially called the ‘Inclined Pulley,’ then ‘Clined’ and finally ‘Clyno.’ In 1909 they began experimenting with a Stevens 5-6hp V-twin engine and a Chater Lea frame, then exhibited a range of single and twin cylinder models at the Stanley Show. During 1910 they moved operations to the former Stevens Bros works in Wolverhampton taking over manufacture of the 744cc 5-6hp V-twin engine which often powered pre WWI Clynos, many of which were sold with an attractive torpedo sidecar.

Developed a 2.5hp lightweight two-stroke before WWI, then was kept busy building V-twin Clyno outfits for the Allied war effort including a larger 8hp JAP powered model for the Russian forces in 1917. After the war production comprised the 269cc two-stroke, 744cc V-twin and later an 8hp V-twin, of which few were made as the factory began building cars in 1922. Motorcycle production ended a year later.

CM 1930-57 Italy
Range of 173-496cc ohc singles and limited selection of ohv models built by rider/engineers Mario Cavedagna and Oreste Drusiani before WWII. After the war the company concentrated on 123-173cc two-stroke singles, a 248cc twin and briefly a 173cc ohc machine.

Condor 1901-c1976 Switzerland
Production started in 1901 using Swiss made Zedel engines built by Zurcher and Luthi then MAG later supplemented by Villiers units. After WWII manufacture focused around a 346cc two-stroke twin and a BMW-like shaft drive flat twin. The factory have specialised in supplying batches of motorcycles to the Swiss military, including MAG single and V-twin powered models before and during WWII, a military version of their flat twin in the 1950s and more recently Ducati 250/350 ohc single cylinder powered models.

Connaught 1910-27 UK
Moderate volume production by the Bordesley Engineering Co Ltd of Birmingham, comprising proprietary engine powered motorcycles of up to 550cc and a range of light to medium weight models using their own single cylinder two-stroke units. Took over the Gloucester manufacturer JES in 1924. Production ended in 1927. Spares are rare for Connaught’s own engines, yet a number of complete machines survive.

Corah 1906-14 UK
Small volume manufacturer who used predominately JAP single and V-twin engines to build a range of superb up to 1000cc machines. A handful survive.