As motorcycle manufacture started, other makers used BSA components and complete cycles to build their first machines. In 1905, BSA built a prototype motorcycle comprising a clip on engine attached to a sturdy BSA cycle – but waited until the 1910 Olympia Show to unveil their first motorcycle, a single speed 499cc (85 x 88mm) 31½hp model, for commercial manufacture. BSA became one of the world’s most influential motorcycle makers.

By mid 1911, the distinctive 3½hp model, with its green and yellow tank, was selling and performing well. For 1912 the 499cc range was expanded to include a two-speed belt driver and an all chain drive model, aimed at the sidecarist. As magneto suppliers Bosch had introduced a waterproof magneto, the steel magneto box was dropped. 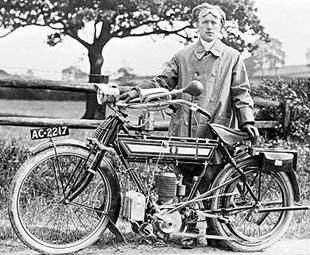 BSA earned a fine reputation for reliability with the ‘everyman motorcyclist,’ leading the company to introduce the robust 557cc (85 x 98mm) 4¼hp three-speed, single cylinder, all chain drive Model H for the 1914 season. The first sidecar was launched and Rudhardt magnetos replaced Bosch across the range. Eight private and ‘works’ BSAs entered the year’s Senior TT and, although not fast, six finished.

With the outbreak of WWI, BSA concentrated on gun making, but motorcycle production continued with a reduced range. For the 1916 season the Model K, like the Model H but with belt final drive, joined the range and the TT model gained the free engine facility. In November 1916, a Ministry of Munitions Order suspended civilian vehicle production except for essential war work. Although BSA supplied machines, especially the Model H, for the war effort, arms was their main business.

In January 1919 the cycle and motorcycle division was split from the main company creating BSA Cycles Ltd with Mr CA Hyde as MD. Later in the year the all-new 770cc (76 x 85mm) 50 degree V-twin, side valve, Model E was exhibited at the Olympia Show, the first in a long line of side valve V-twins, which culminated in the 986cc (80 x 98cc) G14 of 1939. BSA built an impressive range based on honest value for money and durability, rather than racing success – their ill-fated 1921 TT effort discouraged further serious involvement on that front. However, BSA proved their worth in off-road competition. BSA’s model range in the inter-war years would – and has – filled books, so only examples of landmark machines are covered here. 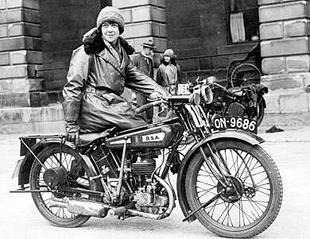 BSA then upped the stakes again with their first ohv machine, the Model L 349cc OHV Sports single, based on the side-valve Model L and later the 493cc Model S OHV Sports single, again based on its side-valve brother. Fans waited until August 1926 for BSA’s next major launch, the new single-port ohv 493cc Model S ‘Sloper.’ It looked right, performed well and later, in stylish twin port form, sounded brilliant. Side-valve as well as smaller and larger models and even a speedway version were made.

During 1936 Joe Bryan took over as MD and Val Page, late of Triumph and Ariel, moved into the drawing office. The range was rationalised, new codes and models were introduced. The 150cc, three-wheelers and Blue Stars were dropped, the lightweight 250/350 models became the B group, all other 350-600cc singles became the M group. The V-twins remained as was.

For 1937, the crankcase sump was replaced by full dry sump lubrication and 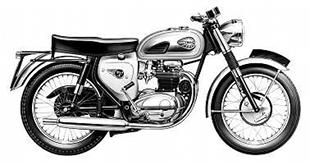 the immortal M20 and M21 models featured in the catalogue for the first time. It was another successful season for BSA with total motorcycle sales of 56,077. A year later Page announced the M24 Gold Star ohv, 496c single, based on the racing model with which multiple TT winner Wal Handley won his Gold Star at Brooklands on 30 June 1937. The first of the ‘Goldies’ was unveiled in September 1937 for the coming season. The marginally slower, but broadly similar, M23 Silver Star with iron barrel was aimed at the fast touring rider.

Not forgetting the utility rider, BSA introduced in 1938 the C range of coil ignition 249cc (63 x 80mm) models, (C10 = side-valve, C11 = ohv) as the world prepared for another World War. The company supplied over 100,000 496cc side-valve BSA M20s, as well as other models, including the M21, C10 and C11 during WWII. Of approx 425,000 motorcycles supplied to the Allied war effort by British factories BSA provided 126,334 machines. They also supplied folding cycles, rifles, machine guns and shells.

With the war over, BSA announced a four model range. This comprised the 249cc side-valve C10 and ohv C11, along with the faithful M20 and the new ohv single cylinder 348cc B31, complete with telescopic front forks. This was one of the most important postwar launches, leading to the 499cc B33 range. Later, sprung frame versions followed, as well as the immortal competition and road-going Gold Star range. First, in 1946, the 349cc XB32 appeared, joined a year later by the 499cc XB34, ZB, BB, CB and DB series in both 350 and 500cc forms. The last 350cc Gold Stars left Small Heath in 1962 and the final 500cc version a year later. With revised cylinder head design for 500cc models only, the DBD34 series started for the 1957 season and was offered in touring or Clubmans trim as well as the Catalina Scrambler for US markets. The Gold Star excelled on the road, on the race tracks and in off road competition.

BSA’s first parallel twin, the 495cc A7, boasting a ‘bolt up’ four-speed gearbox, duplex cradle frame, telescopic front fork and 90mph top speed was unveiled in September 1946. In hindsight, this became know as the long-stroke, or Perkins A7, after engineer/design 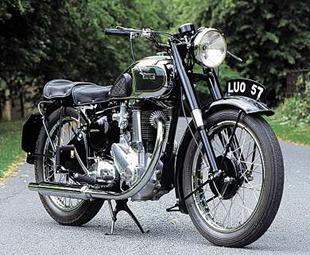 er Herbert Perkins. Bert Hopwood rejoined BSA and for the 1950 season developed the 646cc A10 models, including the Golden Flash and leading to the Spitfire, Road Rocket, Super Rocket and finally the Rocket Gold Star. Production ended in 1963. The A7 engine was revised for 1951 to give the 497cc version – often referred to as the short stroke A7 – of which the Shooting Star was a favourite with many enthusiasts. The A7 was dropped from the range in 1962. Not wanting to miss out on any sector of the market, BSA launched the Bantam in March 1948 with the famous D1, a mirror image copy of the German DKW RT125. Competition D1s, the option of Lucas or Wipac electrics and even, for a brief period, a close ratio gearbox, became available and the D1 continued in production until 1963 – although the mist green finish had long gone. The 148cc D3 appeared in the autumn of 1953, the short-lived 172cc D5 four years later and then came the D7, D10, D14 and D175 ranges. Four-speed transmissions first appeared in 1966 with the D10S and Bantam production ended in 1971

Re-introduced after WWII, the C range comprised the 249cc side-valve C10 and ohv C11 both with girder front fork, which was replaced by teles in April 1946. The C11G with alternator electrics was introduced in 1954 and replaced by the swing arm C12 two years later. The C15 unit range started for the 1959 season, including trials and scrambles variants and two years later, Small Heath unveiled the 343cc B40. The C25/B44 range came in 1967 and the full 500cc B50 models in 1971.

Through the Sixties, Hornets, Lightnings, Royal Stars and Spitfires served the BSA faithful well and were joined for 1968 by the transverse 741cc ohv three cylinder Rocket-Three. Although prototypes, exampled by the 350cc parallel twin Fury SS (called the Bandit when in Triumph colours) and the final revised OiF models, were introduced early in the next decade, BSA were in trouble. Financially the company was on the skids by the end of 1972 and less than a year later production stopped. 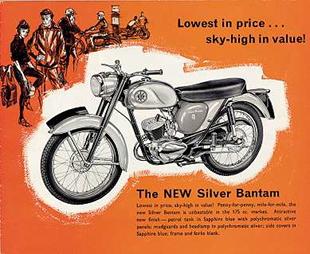 Most BSA models were made in large numbers helping owners and restorers today. Information is plentiful, there is a good spares back up for many post-WWII models and some pre-war machines. Most models perform as was originally intended and, just like modern machines, they are easy to work on and the parts almost always fit. Various attempts have been – and still are – being made to produce motorcycles under the BSA label. These include Yamaha-engined trail machines, military motorcycles based on the CanAm Bombadier and, since the company was bought by Regal Engineering, Yamaha engined four-stroke singles with Gold Star styling.

Such a brief account of a prolific manufacture necessitates omissions. BSA/Sunbeam scooters, Clubmans TT racing, huge off-road competition success, Rocket Three racers… But if the above has aroused the ‘Beezer’ in you, a wealth of literature and motorcycles await your pleasure.