Bohmerland 1925-39 Czechoslovakia
Albin Liebisch designed the unconventional long wheelbase Bohmerland with its ohv single cylinder engine. Some had two fuel tanks and could seat two passengers as well as the rider. A short wheelbase racing version and, later, a two-stroke model, joined the range.

Bond 1949-53 and 1958-62 UK
Designed by Laurie Bond, but built by BAC, the Minibyke with its main frame made of rolled sheet aluminium was followed in 1952 by the equally unorthodox Gazelle Scooter. In 1958 the P series scooter range with bizarrely styled, but not unattractive, glass fibre bodywork was launched. Bond was also responsible for the Minicar, Bug and Bond 875 (1949-72). Villiers engine spares are plentiful, but not so JAP two-stroke. Glass fibre scooter bodies are prone to cracking as are Minibyke alloy frame sections.

Bradbury 1901-25 UK
Production started with Minerva engine/tank kits mounted in heavyweight cycle frames. By 1903 the company marketed a model with part of the crankcase brazed into the frame. Designed by Birch of Nuneaton, Warwickshire and built under licence by Bradbury, the concept became their trademark throughout almost all the production run.

Although unusual in engineering terms the design, which was enlarged to 554cc by 1910, was a favourite amongst reliability trials entrants and those who wanted a robust motorcycle for hard work. Early examples were of direct belt drive but eventually two and three speed transmissions were offered. By the early Twenties, Bradbury’s crankcase-in-frame design was becoming dated and the company added a range of machines with proprietary engines to the catalogue.

Bridgestone 1952-c1972 Japan
Production started with mopeds followed by a range of superbly built 98-345cc, disc-valve, two-strokes, made by the well-known Bridgestone Tyre Company. They were never sold in quantity in Japan as Bridgestone wanted to retain good relations with Honda, Kawasaki, Suzuki and Yamaha. However, they were very popular in the USA and sold in small numbers in Europe, but were expensive.

The 345cc twin, developed primarily for America, was a particular novelty for road riders as the change was all down for shifting up the gears. A tell tale light glowed orange and warned when fifth was engaged. Bridgestone pulled out of motorcycle production to avoid competing with rival manufacturers who bought their tyres. That’s a shame, for many regarded the Bridgestone as the ultimate ‘nutter’ two-stroke. Highly prized in Europe, spares are scarce but can be sourced from the USA. 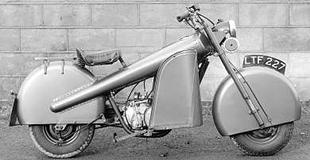 Briggs and Stratton c1919-21 USA
Renowned maker of tough stationary engines, Briggs and Stratton briefly tried their hand with cyclemotors after WWI with their motor-wheel concept attachments. Using their factory built engines, one was designed for rear wheel installation of a cycle while the other replaced the front wheel. Marketed as the Briggs and Stratton Flyer, odd examples turn up on the open market.

Britax 1954-56 UK
Automotive accessory manufacturer who imported Ducati-built Cucciolo cycle attachments. They then built their own frames and complete 48cc machines as well as the Hurricane racer.

Brockhouse 1946-55 UK
Established in 1886 the well-known Midlands engineering company Brockhouse moved into the former Vulcan lorry works at Southport, Lancashire in 1938. Wartime production including military trailers and aircraft gun turrets kept the 5000 strong workforce busy. But when the war ended other work had to be found quickly. 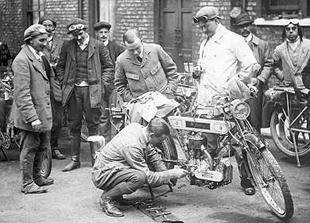 At the war’s end, Dolphin redesigned the machine for civilian use, using an Excelsior Spryt engine, called it the Corgi and sold the manufacturing rights to Brockhouse. By 1948 10,000 Corgis had been made. At the same time Brockhouse became associated with the ailing Indian Sales Corporation (ISC) of America, which it took over during 1951.

Apart from a number of abortive prototypes including scooters and cyclemotor units, Brockhouse’s other motorcycle was the 250cc Indian Brave. Launched in 1951 for the US market, sales were disappointing but not catastrophic. In 1954 the Brave was sold in the UK for the first time. Motorcycle production stopped in September 1955 when Brockhouse quit the Southport factory, by which time factory estimates suggest 13,000 Indian Braves had been made.