BMW 1923-to date Germany
Today BMW is Germany’s only large scale motorcycle manufacturer. Although portraying an image of dependable quality, the company itself has survived a close call with bankruptcy and kept afloat after WWII by manufacturing cooking pots, cycle parts and wood working tools. Their practice of building top quality flat twins – supplemented in the past by singles – and more recently three and four cylinder four strokes is revered by a large band of loyal followers. Yet others refer to the BMW as the ‘Gummi Kuh’ (rubber cow). However, whatever our standpoint we can only marvel at the durability and quality of the BMW.

A jigsaw of small companies based in and around Munich form the backdrop from which BMW emerged. During March 1916, two small aircraft companies run by Gustav Otto and Karl Rapp amalgamated to form Bayerische Flugzeugwerke. A year later a naval engineer who had served a detachment with Austro-Daimler joined the company, which became the Bayerische Motoren Werke GmbH.

After WWI, with much of their aircraft engine data confiscated by the Allied Control Commission, BMW were forced to look elsewhere for trade. After dallying to develop an eight litre heavy duty proprietary engine and the 148cc Kurier-powered Flink motorcycle, Martin Stolle designed the first flat twin engine in 1921. The 493cc side-valve M2B15 was fitted by Victoria, SMW and the BMW-built – but not designed – Helios.

While much of BMW’s workforce disliked motorcycles, their manufacture kept the factory busy. Recognising the problems with the Helios, BMW’s chief designer Max Friz came up with the R32, which was sensationally launched at the 1923 Paris Show. The new machine had a transversely mounted 493cc side-valve flat twin engine in a duplex style cradle frame with shaft final drive. It was a design which, despite transgressions, BMW still adhere to today. 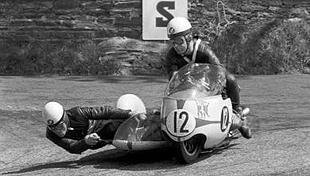 A year later Rudolph Schleicher designed the 16hp ohv 500cc sports model and, in 1925, the first of the single cylinder machines was built. Manufactured on and off until 1967 they were, in effect, half a twin cylinder engine mounted vertically in the frame. Models from the 198cc to 398cc were built. During the late Twenties, 750cc flat twins were added to the range (R62 sv, R63 ohv) and in 1930, pressed steel frames were introduced. In 1935 BMW boasted a work force of over 10,000 employees and became the first company to fit an oil damped telescopic front fork to a motorcycle.

For the first time, BMWs were imported into the UK – by AFN Ltd – and, as war approached, BMW set up an armaments division at Eisenbach. In addition to supplying a range of conventional flat twins for military service BMW built 16,500 R75 outfits with reverse gear. It made a robust vehicle, which could be driven almost anywhere, but cost twice as much to make as the VW four-wheeler that replaced it.

As the Allied Control Commission eased its regulations in Germany after the war, BMW were allowed to build 100 R23s from spares left over from pre-war production. The first new postwar model, again a 247cc single, the R24 came in 1948 and in 1950 the R51/2 494cc ohv twins, updated pre-war R51s were announced. Once again BMW were on their way. A 590cc version, the R67 was added to the range a year later and 3 series models began to appear, sold in parallel to the established 2 series machines.

BMW’s 100,000th post-WWII motorcycle was built in 1953 and, as the management felt the motorcycle division should diversify, a scooter was developed to prototype stage but dropped. Isetta bubble car production started in 1955 under licence from Iso of Italy. Despite launching new models including the R50 and R69, both with Earles type front fork the company was sliding into financial insecurity. Following a rescue plan evolved by Dr Herbert Quandt, BMW began developing new models for the Sixties, including sports versions designated S. The top of the range R69S developed 42hp and was good for a claimed 110mph. 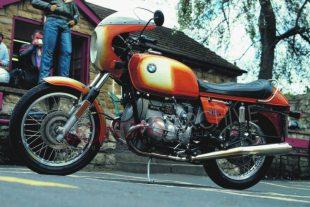 Due to car development, fans had to wait until 1969 for the launch of the ‘/5’ series of leaner lighter twins with telescopic forks. The attractive R90S came in 1974, followed by the 980cc R100RT or RS models two years later. The first of the fours, which were cruelly nicknamed ‘bricks’ were unveiled in 1983. Recent innovation has included an entirely new boxer engine unveiled in the R1100RS in 1993. A big single, the F650 built in Italy and developed in conjunction with Aprilia and Rotax plus an unorthodox semi enclosed 125cc scooter the C1 have since been added to the range. The scooter has since been dropped.

Although BMW has enjoyed solo racing success, including the Georg Meier/Jock West one-two result in the 1939 Senior TT, it is for their racing outfits that they are best remembered, quickly reeling off 14 World Championships in succession before Helmut Fath and his four cylinder URS 1968 broke the run. Spares are available for many models but are often expensive and the bottom end of early high mileage K series engines is suspect.